A Windows 8 hybrid offering good performance but at a steep price. 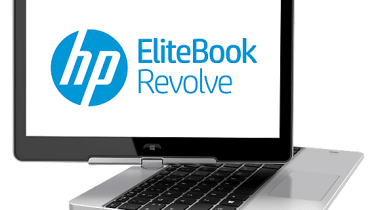 Convertible laptops/tablets have come to the fore since the arrival of Windows 8. Lenovo set the bar high with the ingenuiously designed Yoga Pro 2. Can the HP EliteBook Revolve 810 compete?

The Revolve is one of the most expensive hybrids we've tested. Packing 8GB of DDR3 RAM, a third-generation Intel Core i7 2.6GHz CPU and 256GB SSD, our review unit started at a wallet busting 1,642. Is it worth the price?

Pitched as a hybrid the 11.6in display on the Revolve swivels on its base and allows users to convert the device into a tablet.

The construction of the Revolve is top draw. It sports an all magnesium alloy chassis and a strong hinge, which will withstand the rigours of enterprise usage and it looks good too. 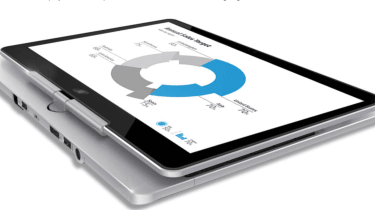 At 11.6ins the display is smaller than most laptops, and is closer to a netbook. Weighing in at 1.4kg, the Revolve is heavier than the larger 13in MacBook Air (1.3kg) but still portable. However, it is heavy when compared to tablets such as the iPad Air (469g).

The Chiclet-style keyboard feels responsive. Despite the small size, it doesn't feel cramped when in use. Although this reviewers hands are a little on the small size, those with bigger hands may feel their wrists dropping off the side of the machine. The keyboard is as durable as the chassis as it is also spill resistant too.

The mousepad is compact but it reponds to movements and finger presses. It's complemented by the inclusion of the touch screen, which means you don't have to rely on it 100 per cent of the time.

The LED-backlit HD UWVA screen is rugeddised with Gorilla Glass, but HP has opted for a bog standard resolution of 1366 x 768. It's not in the same league as the Retina Displays found in MacBooks or the 3200 x 1800 resolution on the Yoga Pro 2. 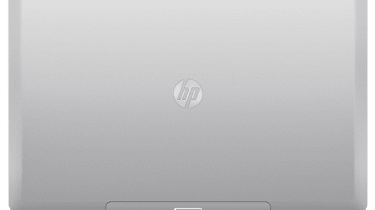 HP has kitted the Revolve out with a number of ports. It includes 2 x USB 3.0 connections, Gigabit Ethernet and DisplayPort 1.2 ports as well as a docking connector. The Revolve is dockable too via its side-docking connector and there's a slot for a microSD card.

Wi-Fi takes the form of 802.11a/b/g/n and there's Bluetooth connectivity. Underneath the battery is space for a micro-SIM, so you can have connectivity on the move. There are a ton of sensors built in, which are normally not found on hybrids - these include a gyroscope, accelerometer, compass, and NFC.

Where HP majors on for this device is the security measures. Alongside the security features in Windows 8 (and 8.1) there is also HP's BIOS Protection, TPM 1.2 and HP Client Security thrown in for free. When we upgraded the machine to Windows 8.1 we had to uninstall the HP Client Security software before proceeding. We can only hope re-installing it is an easy thing for the IT department to do.

There is also the option to install LANDesk Management Suite on the device allowing IT departments to manage whole fleets of devices.

The Revolve boots in 10 seconds and it's zippy in everyday use. Despite running on the 2012 Ivy Bridge architecture, the Revolve outperfomed the Yoga Pro 2, which runs on the latest Haswell part. This can be explained by the inclusion of the high-end Core i7 processor and double the RAM. But the reliance on the integrated Intel HD Graphics 4400 and lack of discrete graphics means the Revolve is not for those who want to render heavy duty 3D applications. 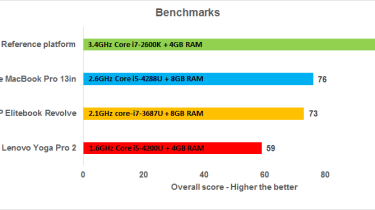 The use of the powerful Core i7 processor has a negative impact on battery life. The Revolve comes with a six-cell 44WHr polymer cell. In our tests, simple day-to-day working (emails, office productivity, web-surfing) yielded nearly six hours of battery life. In our video tests, battery life became even shorter. Continuous looping of an HD movie got us four hours and thirty minutes of battery life. 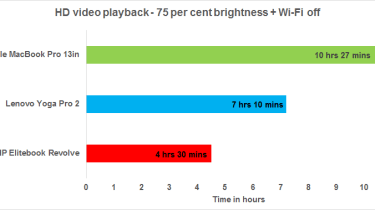 The Revolve isn't the most upgradeable device in HP's fleet, but there is scope to improve specifications after purchase. The battery is straightforward to replace, and but RAM requires a screwdriver to access. HP has soldered in 4GB onto the board and left 1 x SODIMM slot user accessible. This can accept 4GB or 8GB modules, bringing the maximum capacity to 12GB.

However, to maximise dual-channel performance, HP recommends the size of the memory in both SODIMMs should be the same - so you might not see any real performance boost after 8GB.

HP hopes its EliteBook Revolve 810 will stand out from the crowd, but with prices from 1,642 (including VAT), it doesn't offer value for money. We think many businesses would rather pay less money for a brand new Yoga Pro 2 or MacBook Pro, which will have longer battery life and better display.

The HP Revolve is a reasonable attempt at a hybrid with the stand out feature being the performance. However, it is let down key areas including the display and battery life, something which cannot be ignored at this price.