A top-heavy Windows 8 detachable with middling performance and battery life. 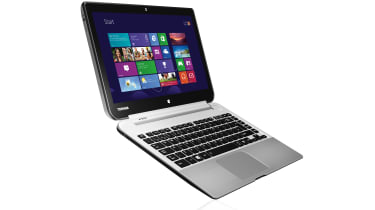 The Core i3-4020Y processor used in the W30t is one of the weakest Haswell parts Intel offers. It's an ultra-low-power processor with a Therman design power (TDP) draw of 11.5W. However, it isn't built for performance. The chip has two Hyper-Threaded cores, a stock speed of 1.5GHz, and no Turbo Boost.

The processor, accompanied by an lacklustre 4GB of RAM, disappointed in tests. It scored a total of 54/100 in our real-world benchmarks which tested multitasking, audio and video encoding. This places it second bottom in our list of Windows and Mac devices. 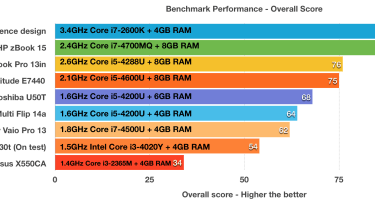 The low-end GPU isn't cut out for a bit of after-hours gaming, either. We loaded BioShock Infinite at 1,366 x 768, but only hit a playable 33fps at the game's low quality settings.

The 500GB hard disk provides more space than SSD-based machine, but speed suffers. The disk's read and write results of 104MB/sec and 99MB/sec are average for hard disks. A boot time of 46s is three or four times slower than SSD-based systems.

It all make for a dissatisfying experience. There is an occasional stutter before the Start screen opens, Metro UI apps are sometimes afflicted with poor loading times even though they run smoothly once opened and we are frequently left waiting when booting software in desktop mode. Don't bother trying to run demanding desktop apps because the Toshiba won't be able to handle them.

The Toshiba used its two batteries to last for 5hrs 37mins in our video playback test with the screen set at 75 per cent brightness and with Wi-Fi deactivated. It's a decent result, and better than the HP, although it's still a long way short of the Lenovo and nowhere near the MacBook Pro. 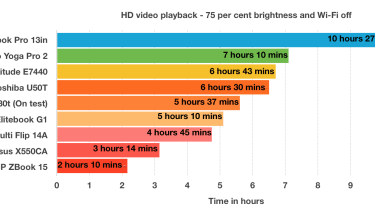 The Toshiba's heavyweight design and mixed build quality prove detrimental during use. It's unusual for a laptop's screen to be as heavy as its base, and it meant the Satellite feels top-heavy throughout it's easy to tip the laptop forward when prodding the screen.

The screen's weight also makes it tricky to use this machine as a conventional tablet: its 1.05kg bulk, 14mm thickness and 13.3in screen makes it uncomfortable to hold for any length of time. It's the same problem faced by the Lenovo, which also has a 13.3in panel.

The poor base build quality has a detrimental impact on the keyboard. The lack of strength makes the Scrabble-tile unit feel uncomfortably bouncy, and the keys don't improve matters they have little travel, feel cheap, inconsistent and too light when pressed. Typing is comfortable. 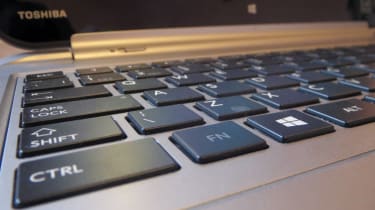 The trackpad is a little better thanks to a pair responsive buttons, but the surface area is smaller than competing machines.

It's these kinds of ergonomic issues that prevent the W30t from succeeding as a hybrid device.The processor can only handle low-end tasks, the screen has a mid-range resolution and mediocre quality levels, and the storage is slow. The W30t just can't cut the mustard.

The dual batteries provide good longevity and this machine is cheaper than rivals, but the sluggish and clunky user experience means this is tricky to recommend.

It's hard to recommend the W30t. If money is tight, buy another tablet and a good-quality keyboard – if not, spend a little more on a higher-quality machine like the Lenovo.