Despite being full of useful ports, the R30 is letdown by a poor screen and keyboard 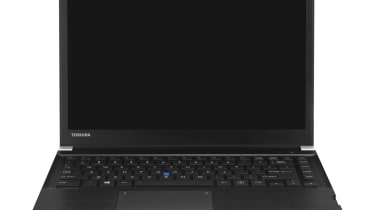 The removable battery in this sample was a 5,800mAh unit, and the huge capacity delivered in the longevity department. In our standard battery test - a looping video with no Wi-Fi and the screen at 75 per cent brightness - the Toshiba lasted 7 hours 14 minutes. That's longer than every Windows laptop we've tested recently, but unable to match the mighty MacBook Pro's ten hour lifespan. 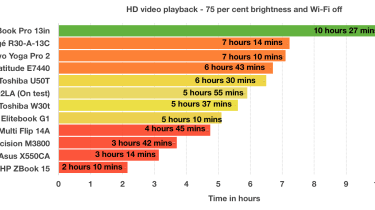 Bear in mind that the Portg won't always this long-lasting. When we simulated video encoding, photo editing, web browsing, video chat and other work tasks, the Toshiba burnt through the battery in 2hrs 17mins.

Screen if you want to go faster

We like the Toshiba's matte screen, but it appears bad news isn't fair away with the R30. The 13.3in panel has no touch screen functionality, viewing angles are poor, and the 1,366 x 768 resolution is dated. The size also means there's not enough space to use two windows at the same time.

Quality is lacking, too. The measured brightness of 184cd/m2 is low and the 0.79cd/m2 black point is worse. That means a contrast of 232:1, which means a screen lacking vibrancy and nuance. Colours appear washed out and dim. 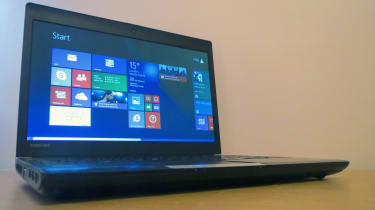 The average Delta E of 10.96 is dreadful, and the 6,897K colour temperature is on the cool side. Our final test, gamut coverage, saw the Toshiba display just 62 per cent of the sRGB range, with reds, greens, purples and blues all suffering badly. This is a screen for web browsing and word processing tasks.

Toshiba sells a variety of Portg specifications. The cheapest, the R30-A-14K, costs less than 800 but uses the base-level Core i3 processor, and several other models have similar specifications and prices to the R30-A-13C we've reviewed here.

All can be augmented with a wide selection of accessories. A docking station, keyboard and mouse bundle costs 154 exc VAT and adds six USB ports, four display outputs and more audio jacks to the Portg. A 4GB memory module is 37, an 8GB stick is 72, and a second 2,900mAh battery costs 35 - and a larger 8,100mAh unit is 50.

By default, the Portg has a one-year warranty. Three- and four-year deals are 40 and 60, and on-site service for those lengths costs 120 and 140.

Toshiba includes several applications with every Portg, but few are notable - most just wrap familiar Windows settings for display, power consumption, passwords and more inside a Toshiba-branded interface.

There's no denying the versatility of this system thanks to its broad roster of business features, reasonable performance and impressive battery life.

But several problems prevent us from giving a wholehearted recommendation. At this price, the screen is dreadful and the keyboard isn't good enough. High-quality units like the Dell Latitude 14 7000 Series and MacBook Pro are better investments.

Promising much, the R30 is let down in key areas as it's got a poor screen and keyboard ergonomics.