MacBook Pro 13in vs Surface Pro 3 review: Which is better?

OS X and Windows 8.1 battle it out to see is if the hybrid is better than the laptop 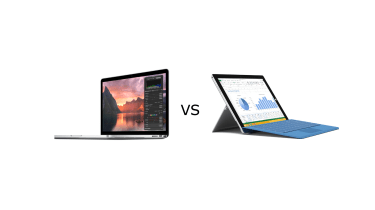 Windows 8.1 has closed the gap to OS X devices but MacBooks remain king when it comes to battery life. This is an important consideration as the batteries are sealed into the devices.

Both Apple and Microsoft claim up to 9 hours of battery life. At 75 per cent brightness and with Wi-Fi turned off, we were able to surpass this on the MacBook, but the Surface Pro 3 struggled to live up to the claim. 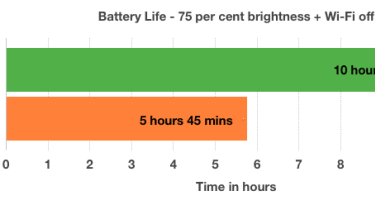 The Surface is able to creep up to 8 hours, if you lower the brightness below 50 per cent and then continue to turn it down. You'll get close to nine hours of Wi-Fi browsing on the MacBook with 75 per cent brightness.

Our review units packed similar specifications, giving a good indication of the performance levels you can expect.

Boot times were close to identical with the machines ready to roll in 10 seconds from a cold start. Resuming from sleep took a couple of seconds apiece. 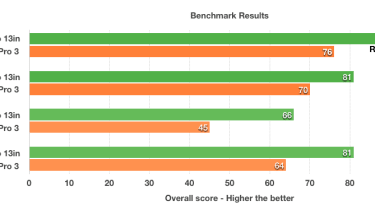 Both machines were quick to open and close apps, zipped through web browsing and crunched through light-to-midrange multimedia work. However, the Apple device proved more capable, especially when it came to running multiple applications simultaneously.

Winner: MacBook Pro - For everyday usage there's not too much of a difference, but when it comes to multitasking and responsiveness, the OS X machine is superior.

This is the most subjective part of the overall test. Some users prefer Windows, whilst others swear by OS X.

The Surface Pro 3 ships with Windows 8.1 Pro (64-bit). It's defaulted to boot to the Start Screen with the Live Tiles but this can be bypassed in the settings menu. Unless your business has developed an app in-house, you're unlikely to spend much time in this portion of the OS.

Windows remains suitable for business deployment as it supports all commonly used programs and admins are used to managing it. However, security remains a concern and machines will need to be pre-installed with anti-virus software, which in turn can affect end user performance.

The MacBook Pro is currently shipping with OS X Mavericks, which has the classic desktop interface. If you're switching over from Windows, you'll need to get used to the keyboard and menus. But it is intuitive and overtime we find there's less performance degradation than with Windows devices.

Apple has been rolling out desktop updates on a yearly basis and the latest - OS X Yosemite - will be available in the autumn for free. Microsoft has also been keen to adopt a more regular update cycle. Windows 9 will reportedly be announced on 30 September.

Winner: MacBook Pro - Apple has kept the desktop interface simple and easy to use. The firm also has a yearly refresh cycle in place, whereas Microsoft update process remains jumbled.