A £2,500 machine designed to handle the toughest conditions 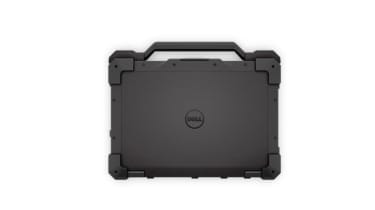 Littered with chunky flaps, buttons, exposed screws and a handle, the device has a distinct military look.The bottom panel has its own ports and vents, and every corner has shock-absorbent plastic attached.

No notebook we've tested is stronger. Every port and socket is sealed by a flap with compression gaskets and a "dual-knife-edge" design to protect ingress from outside material.

All this protection makes the Rugged Extreme one of the largest and heaviest notebooks around.Its 52mm thickness is huge - the equivalent of five Surface Pro 3 tablets stacked on top of each other. And the 3.86kg weight makes this system three times as heavy as standard business notebooks.

However, all this bulk does provide tank-like protection. The interior is hewn from metal alloys, and the exterior is enhanced by futuristic plastics. There's no give anywhere and its sterling build quality is just the start. 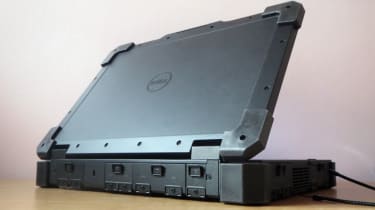 Rugged in the Extreme

Dell has subjected the Latitude to a battery of tests allowing it to be used in a variety of extreme environments from the jungle to the desert.

It adheres to MIL-STD-810G standards so it can handle dust, sand, rain, vibrations, humidity, high altitudes and even solar radiation and electromagnetic interference. Dell quotes a temperature operating range between -29C to 63C and the Extreme is rated to work in "explosive atmospheres" too. This means it'll keep chugging along in environments with high levels of hydrogen, carbon monoxide or where there are fuels/solvents present.

Dell claims the device can survive drops from three feet when operating and can emerge unscathed from a 6ft drop if turned off. This is thanks to the magnesium alloy frame augmented with shock-absorbent ultra-polymer.

A vast port selection is hidden behind several sturdy hinges. A total of 4 x USB connectors, 2 x Gigabit Ethernet sockets, 2 x native RS-232 serial ports and both D-SUB and HDMI outputs are provided. There's a memory card reader, an ExpressCard/54 slot, and slots that allow the hard disk and battery to be removed. 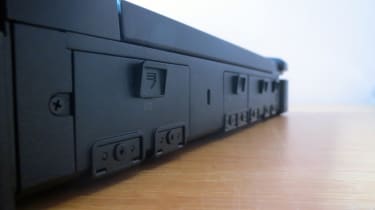 Dell bundles in a combination of hardware and software security options.

The exterior has a steel-reinforced cable lock slot and a fingerprint reader. A TPM 1.2 chip improves the Dell's hardware specification, even if it's a standard component on many business notebooks.

The software side is no less well-equipped. ControlVault authentication works in conjunction with the Latitude's fingerprint reader in order to prevent unauthorised laptop access, and data protection and encryption options are available. This machine also adheres to the NIST SP800-147 standard, which provides various safeguards that ensure BIOS security and integrity.

Getting inside is tricky. The Dell's base is held in place by 29 screws but once opened you'll find everything neatly arranged. The memory sockets, heatsink and major components are easy to reach, and there's a spare M.2 slot. 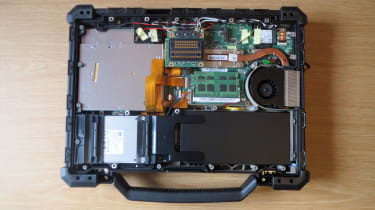 The Latitude's internals are aren't as flashy as the packaging. Our sample had a mid-range Core i5-4300U, low-power processor clocked to 1.9GHz. It's accompanied by 8GB of RAM and a 256GB SSD, a standard specification these days and its application benchmark result of 70 indicates it has similar performance to mid-range Ultrabooks.

There's no room inside for a discrete GPU. Intel's HD Graphics 4400 core is a reasonable integrated chipset, but it'll struggle with intensive graphics work. When it comes to standard and graphical applications, dedicated workstations are significantly quicker.

Connectivity options are standard: there's dual-band 802.11ac Wi-Fi but it's only a 2x2 unit, and we expected to see Gigabit Ethernet and Bluetooth 4 on this type of notebook. A DVD writer is also included. Dell touts optional mobile broadband on its website, but it's not available on UK systems at the time of writing.

The lack of real power means that there are no thermal issues even during tough stress-tests, the Latitude remained cool and quiet.

Battery life is a weakness. In our standard test running a video loop with the screen at 75 per cent brightness and Wi-Fi deactivated, the Dell lasted four hours and 38 minutes. That's half the lifespan of the best Ultrabooks, but better than more powerful workstation machines. Turning the screen brightness down to 25 per cent eked almost 90 more minutes from the battery, but this isn't a system that'll last a full day away from wired power. 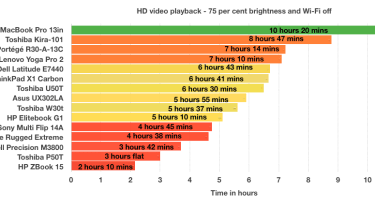