Using Intel's 2014 Broadwell chip, the Yoga 3 Pro is one of the slimmest and lightest laptops around 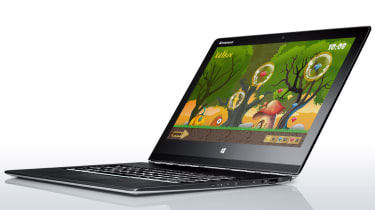 The ultra-thin chassis and flashy watchband' hinge make the Yoga 3 Pro look tantalising. It's got the style, but does it have the performance to match the sky-high starting price of 1,299?

Lenovo's third generation model uses Intel's latest Broadwell processor, has a quad-HD 13in display and 256GB SSD. It also retains the trademark contortion associated with the Yoga brand - so you can flip the screen and rotate it to get different viewing modes. 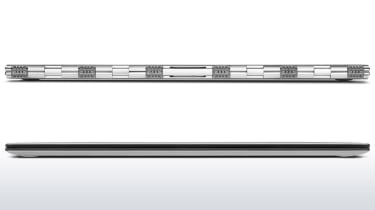 The design of the Yoga 3 Pro is unique. When folded flat it measures a mere 12.8mm thick -  the same as an average USB stick - and weighs 1.2kg. This makes it lighter and thinner than Apple's 13in MacBook Air (1.35kg and 17mm thick) which is usually singled out for praise over its design. You can pick up the Yoga 3 Pro in one hand with no trouble at all - and this makes it usable in tablet mode.

A key factor in making the chassis thin and lightweight is the introduction of the watchband hinge. Mimicking an expensive wrist watch, there are over 800 individual components making up the links, according to Lenovo. 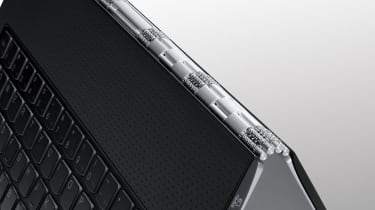 Using the link design has allowed Lenovo to reduce the size of the hinge connecting the screen and keyboard sections which is traditionally the thickest point of any laptop. Like all Yoga models, this hinge allows the device to be twisted and manipulated into tent, tablet and stand modes.

Although it looks great, there are concerns about the build quality. The screen panel flexes more than we'd like, and it doesn't feel as durable as the ThinkPad range.

The Yoga 3 Pro boasts the same quad-HD' 3200 x 1800 touch-sensitive IPS display as its predecessor. This provides superb image quality, with a bright, colourful display, making it ideal for web browsing, streaming video or photo-editing work. Viewing angles are superb too. 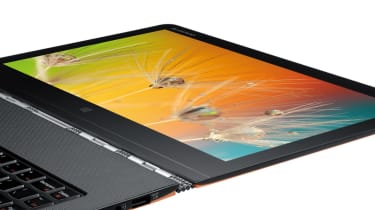 But, as we discovered with the Yoga 2 Pro, the limited scaling options built into Windows mean that interface elements such as toolbars and menus within many third-party apps can appear so small that they become difficult to use.

This problem is slowly being addressed by developers Adobe has announced that the Windows version of Photoshop would be updated to support high-resolution displays such as this but it still means that you may occasionally have to lower the screen resolution for legacy apps.

Despite its slimline design, the Yoga's compact internal speakers were louder than we'd expected. The sound lacks bass, but is loud enough for listening to streaming video or giving an impromptu presentation to a client.

The slimline design of the Yoga 3 Pro does sacrifice overall performance, even if the specifications on paper do look meaty.

The entry-level Yoga 3 Pro includes a Broadwell M-5Y70 processor running at 1.1GHz, along with 8GB of memory and 256GB of solid-state storage. The only other configuration available costs 1,499 with 512GB storage.

The Core M-5Y70 does provide a Turboboost option capable of increasing clock speed to 2.6GHz, but  performance was modest in our benchmark tests. Its overall score was just 49, compared to 59 for last year's Yoga 2 Pro. 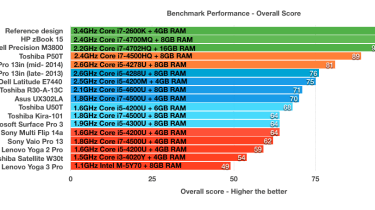 The Yoga 3 Pro did produce better scores in some of our individual tests. Its integrated HD 5300 graphics managed a score of 85 in our Photoshop tests, so it will cope well with graphical tasks such as photo-editing or presentations. Responsiveness was snappy with the device taking just eight seconds to boot, and two seconds to wake from sleep.

Intel has claimed its Broadwell processors are up to 30 per cent more power-efficient than its Haswell predecessors. Even so, the high-resolution display requires plenty of battery power and Lenovo has trimmed its original claim of nine hours of battery life down to a more modest 7.2 hours for the Pro 3.

When running our Iron Man video test with brightness set at 75 per cent and Wi-Fi turned off, the Yoga 3 Pro lasted 6 hours and 45 minutes, so you could probably stretch that past the 7 hour mark for less demanding tasks. 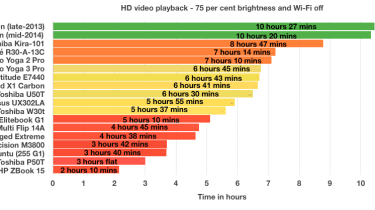 This falls well short of the 10 hours of video playback we've seen from rivals such as the 13in MacBook Pro The battery is sealed into the base of the laptop, so there's no easy way to swap in a spare battery or perform other upgrades or repairs.

Connectivity is also limited, as the slimline chassis has space for 2 x USB 3 ports, a micro-HDMI connection and an SD card slot. If you want to connect wired Ethernet, you'll need a USB adaptor. We're also slightly concerned about Lenovo's proprietary power socket, which looks identical to a USB port. That could cause problems if someone were to accidentally try and plug the live power cable into one of the USB ports.

There's no denying the elegance of the Yoga 3 Pro from a design standpoint. Its outstanding high-resolution display and design are the standout features. But it is a case of style over substance.

But at this price range, the performance of the Yoga 3 Pro isn't good enough and makes it hard to recommend.

The performance and battery life can’t justify the £1,299 starting price.