Can this Core i5 15in laptop deliver value for SMBs? 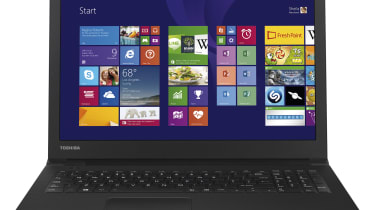 Toshiba's no-nonsense business notebook is aimed for use within SMBs, educational and governmental institutions.

With a Core i5 processor, slimline exterior and reasonable price, the device is a direct competitor to the Dell Latitude 13 series.

The 500 price point guarantees the use of modest components. The Core i5-4210U processor is a popular low-power part clocked to 1.7GHz, and is paired with 4GB of RAM. Toshiba offers a 5,400rpm, 500GB hard disk as standard, which can be upped to 1TB.

The resulting performance is mediocre. The R50 scored 59/100 in our benchmarks placing it near the bottom of our table - but above the Yoga 3 Pro, which is over double the price and has the most recent Intel Core M processor. 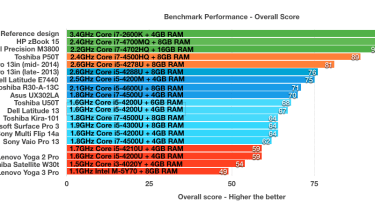 As a bonus, the performance of the R50 jumped up to 67/100 - matching the Dell Latitude 13 after we removed bloatware from the machine.

The hard disk acted as a bottleneck with sequential read and write speeds of 95MB/s and 82MB/s. This also impacted on boot times with the R50 taking 47 seconds to start up.

At least the R50's middling components meant there were no thermal issues. The system stayed cool and quiet throughout our tests.

The slim four-cell battery pack as the rest of this machine. In our standard battery test video playback with Wi-Fi turned off and the screen at 75 per cent brightness the R50 lasted for 6 hours and 49 minutes. 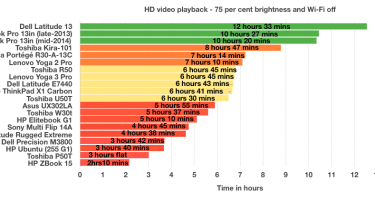 It should extend to eight hours with the screen dimmed and Power Saver mode chosen but it's unable to match its rivals like the Latitude 13, which currently leads our benchmarking with 12 hours and 33 minutes.

The 15.6in display features a dated 1,366 x 768 resolution. It's not ideal for multi-window working, lacks touch screen functionality and isn't suited for high-definition work. However, it does have a matte finish to take the edge of brightly lit office environments. 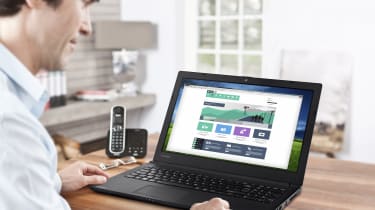 The 233cd/m2 brightness level was decent, but every other aspect of this panel disappointed. The wayward Delta E (8.18) and cold colour temperature (6,931K) meant colours were pale.

Black levels were so high, they appeared a deep shade of grey. And a low contrast (231:1) meant colours had no depth.

At the 500 mark, this is typical of the quality and whilst it's ok for browsing and word processing, it's not cut out for any multimedia work.

At 2.3kg, the R50 isn't the lightest laptop around but it's portable.

Build quality is solid with the little flex in the underside or wrist-rests. Toshiba has included an optical drive, an endangered species in 2014, and also a numberpad. The edges house 2 x USB 3 ports, a USB 2 connector, and HDMI and D-SUB outputs. There's a card reader and a Kensington lock slot, but no fingerprint reader. 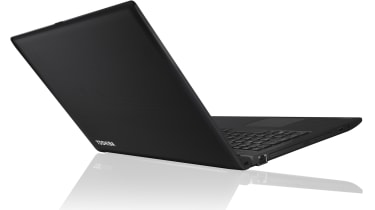 It looks like the budget ran out before the R50 got to Toshiba's design department because it's one of the plainest portables we've seen. The black plastic is barely decorated with subtle straight lines, the keyboard and trackpad are both black, and only the lid's Toshiba logo is decorated in metallic, shining plastic.

The R50's keyboard has a sensible layout, with large keys and a numberpad, and the Scrabble-tile typing surface proved pleasing to use. The keys were consistent, with a light, rapid action aided by the solid base. 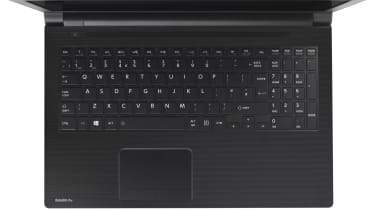 The trackpad was fine with Toshiba steering clear of any gimmicks. We found the smooth surface to be accurate.

Better ergonomic designs are available but you'll have to spend considerably more.

Unusually, the R50 ships with two operating systems. Windows 7 Professional 64-bit is preloaded and a copy of Windows 8.1 Pro 64-bit is included on a DVD.

As with most PCs, bloatware makes an unwelcome appearance. McAfee's security software threw up numerous irritating pop-ups, and Internet Explorer was saddled with an extra tab from bookmarking tool Symbaloo.

The inclusion of Evernote, Spotify and Winzip was welcome, but over a dozen Toshiba tools were included, too.

It's up to users to decide how much of this software they'll keep, but we've already seen how this can reduce performance.

Removing all of those applications helped boot times, too the sluggish 47s boot sped up to 27s once we'd axed the bloatware.

This no-nonsense business system doesn't excel in any one area. The keyboard and trackpad are good, build quality is reasonable and its performance is average.

This machine is capable of handling basic work tasks, and its sturdy design means it'll be at home in the office or on the road. Dell's system is lighter, with better ergonomics and battery life, and isn't much more expensive so we'd opt for the Latitude rather than the latest Satellite Pro.

This jack-of-all-trades system is let down by an awful panel.