Apple Mac Mini (2014) review: Everything you need to know 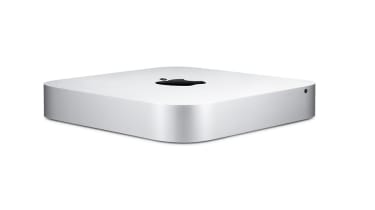 07/12/2015:October and November have come and gone and sadly no new Mac Mini is in the offing as yet. The Apple store is still showing the three different models on offer, ranging the entry-level model with a 1.4GHz processor and 500GB of storage (costing 399) to the 2.8GHz version wit 1TB of storage (799).

We don't expect to see a price cut when the nextMac Mini comes along, but hopefully we'll see better specifications.

10/11/2015:NewerTechhas launched itsHDMI Headless Video Accelerator, that is designed to be plugged into the Mac Mini's HDMI port and make the Mac Mini run smoother when used as a headless unit.

"Mac mini packs phenomenal power into a compact form factor, but when it's operated without a display attached, the GPU isn't activated - meaning it's not pulling its weight. So when you access your mini remotely, the CPU does all the work rendering the user interface. As a result, the interface lags; OS X animation, cursor movement, menu navigation, and typing all suffer, making remote operations a pain," according to the blurb on NewerTech's website.

18/08/2015:Leaked slides from an Intel presentation suggest that Skylake processors could be making their way into future Macs, possibly even the Mac Mini.

According to Apple Insider, the chips could bring performance and power improvements to a range of future Macs. TheSkylake's 14-nanometer architecture could improve CPU performance by 10 to 20 per cent over Broadwell-based systems while at the same time improving battery life by up to 30 per cent.The desktop-level S-Series chips could make it into the iMac or Mac Mini.

15/07/2015: Is the Mac Mini due for a Broadwell upgrade? Now that Apple's flagship MacBooks have received updates to incorporate Intel's latest processors, Mini fans are wondering when their device of choice is going to get a new performance-boosting CPU.

Although it's available in the newest MacBooks, Broadwell still hasn't seen a full-scale general release, which is possibly why the Mac Mini is still without an upgrade, but as the chips get closer to consumer launch, the likelihood of Apple announcing an updated Mac Mini gets greater.

Some have speculated that Apple will, in fact, wait for Intel's Skylake processors - the next generation following Broadwell - but given that these have yet to be seen, Broadwell integration remains the more likely option.

It's been two years since the Mac mini received an update as Apple has focused on its MacBooks, iPhones, iPads and iMacs. That may sound enticing after such a long wait, but if you're expecting a radical update, you're going to be disappointed.

The external design of the Mac Mini hasn't changed since 2010. The Aluminium chassis remains, but it's as elegant and compact as ever.

The Mini can be placed flat or vertically on a desk. It doesn't take up much space and the 1.2kg weight makes it as portable as an Ultrabook. The power supply is built into the body, so there's no power brick to cause any clutter, and for showrooms and point-of-sale systems it's possible to keep the Mini out of sight with a specialist stand.

Despite the small chassis, the Mac Mini has all the connectivity options you'd find in a full-size desktop system. The back of the unit houses 4 x USB 3 ports, 2 x Thunderbolt 2 ports, and an SDXC card slot. There's Gigabit Ethernet for office networks, and 802.11ac Wi-Fi and Bluetooth 4 for wireless connectivity. 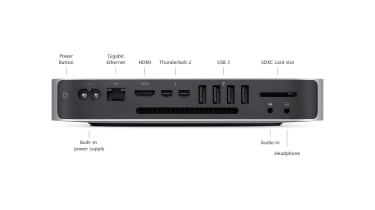 The Mac Mini includes an HDMI interface for connecting to an external monitor which you'll need to supply yourself. Thunderbolt ports can be used to provide video output too, but you'll need to budget 25 each for Apple's DVI or VGA adaptors.

The price of the Mac Mini doesn't include a keyboard or mouse, so you'll need to provide those as well. Apple charges 40 for its wired mice and keyboards and 59 for the wireless versions. However, its keyboard and mice designs have few admirers even among devoted Apple fans, so most business users will probably be happy to look at less expensive alternatives. The same thing applies if you need to use an optical drive with the Mac Mini Apple's DVD SuperDrive costs 65, so you may prefer to buy a less expensive generic drive if it's needed.

Despite the lack of keyboard, monitor and mouse, the 2014 version of the Mac Mini provides good value when compared to its predecessors. As well as the long overdue update to a Haswell processor, this model also comes with a welcome 100 price cut.

Then again, the lack of monitor could be a dealbreaker for some unless you already have one ready to go.

The entry-level 2014 Mini starts at 399 with a 1.4GHz dual-core Haswell i5 processor, 4GB of memory and a 500GB hard drive. It's a modest specification, but it does run OS X Yosemite 10.10 and is adequate for routine web browsing and running Office apps.

We reviewed the mid-range model priced at 569 with a Core i5 running at 2.6GHz, 8GB memory and 1TB hard drive.

This combination produced a respectable overall score of 82 per cent in our benchmark tests - almost identical to the performance of the 2014 MacBook Pro with the same components. 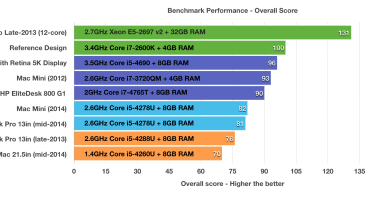 The 2014 model was slower than the 93 point score of 2012 Mini. However, the previous model was a top-of-the-range unit with an i7 processor costing a total of 799. This year's mid-range model, therefore, offers solid performance for 569.

It's also worth noting the 2014 Mac Mini's updated Iris 5100 integrated GPU provides strong graphics performance, scoring 94 per cent in our Photoshop tests. It makes the device a good choice for photo-editing or presentations work for business users who don't want to spend 1000 or more on an iMac.

If money is no barrier, the top-end model is worth a look 799. It provides a speed increase to 2.8GHz, and includes one of Apple's 1TB hybrid Fusion' drives to enhance boot times. This could be worth an investment as OS X is built to take advantage of flash drives. However, this model isn't competitively priced as the 2012 model provided an i7 processor for the same price. Business users will also be disappointed to see that the Server configuration has been discontinued.

Repairing the device isn't as easy as previous models. You can no longer rotate and remove the circular plate on the base. It's fixed in place with T6 Torx Security screws and even if you do gain access, there's a limit to what can be done.

The processor and memory in the Mac Mini 2014 are soldered onto the motherboard, which means configuration at the time of purchase becomes crucial. Teardown site iFixit gave the Mini a reasonable score of 6/10 when it comes to repairability.

It costs 80 to upgrade the entry-level model from 4GB to 8GB. If you want the maximum 16GB you'll need to splash out an extra 160. That's far more expensive than if you were to purchase and install the extra RAM yourself, and the lack of upgradeability remains a weakness across Apple's entire product range.

The Mac Mini remains one of the best all-round small-form-factor desktops available when it comes to performance and connectivity. The 100 price cut and the inclusion of the Haswell processor mean that the 2014 edition of the Mac Mini represents good value.

You'll still have to budget for a monitor, mouse and keyboard, but if you're looking for a compact system capable of handling a wide range of tasks then the Mac Mini is an excellent choice.

The lack of user-upgrades is a step backwards and may deter IT admins from deploying the Mac Mini.