Find out how the Core M hybrid stacks up in terms of performance and battery life... 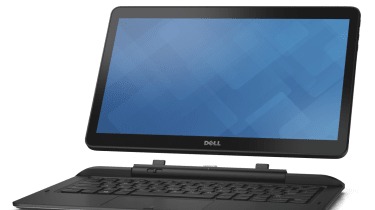 Dell's latest Latitude is one of the most expensive hybrids around. The main reason it's upwards of 1,200, is because the 7000 series is one of the first to ship with Intel's latest Core M technology, which brings plenty of advantages.

The Impact of Intel Core M

Core M processors mark the debut of the Broadwell revision. The reduction in chip size from 22nm to 14nm delivers significant reduction in power consumption via improved voltage regulation and on-chip controllers. This is done without any detrimental effect on performance.

The power drop in particular is drastic. The Dell's Core M-5Y10 has a top power draw of 4.5W a huge reduction from the 11.5W and 15W requirements of previous low-power Core i3 and Core i5 Haswell chips.

These improvements mean Intel can drop its clock speeds another move to reduce energy requirements. The Core M-5Y10 motors along at 800MHz and tops out at 2GHz when the Turbo kicks in hundreds of Megahertz lower than older silicon.

The lower clock speed and power draw makes Core M sound like a low-impact chip, but that's not the case.

The Latitude scored 48/100 in our benchmarks, which isn't as abysmal as it looks. It's only one point slower than the Lenovo Yoga 3 Pro, which had a faster Broadwell processor and double the RAM. In general it's around 10 points slower than last generation Haswell hybrids, which tended to deploy more power hungry Core i5 silicon. 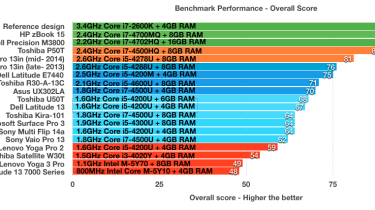 The Latitude 13 is best used for word processing and web browsing. And, while the Latitude's Broadwell chip returned a middling benchmark score, we rarely noticed its lack of speed in real-world use: Windows 8.1's Start screen and the desktop both proved snappy, applications loaded quickly and we never encountered serious delays.

The HD Graphics 5300 core helped the Latitude score 77/100 in our Photoshop test. It doesn't quite match the 85/100 scored by the Lenovo, but it still highlights this chip's potential in graphical applications.

Broadwell's reduced thermal footprint bodes well for heat and noise: the Latitude is silent when running demanding software, and the temperature of the chip did not rise above 59C.

Core M isn't the only future-proofed component here. Storage comes from a 256GB Samsung PM851 SSD, which connects using the newer M.2 standard rather than the traditional SATA 6 port a move that seems to have paid off, with a rapid 12s boot time. The Samsung's sequential read and write speeds of 470MB/s and 187MB/s are mediocre, although this never translated to sluggish real-world pace.

Broadwell's improved efficiency helped battery life, and Dell gives the Latitude a helping hand by installing two batteries: a 30Wh unit sits in the screen, and a 20Wh power pack sits below the keyboard. 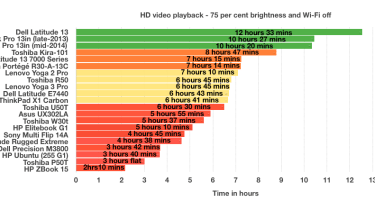 With both batteries deployed the Dell lasted for 7 hours and 15 minutes in our standard video loop test (75 per cent brightness, Wi-Fi off). That's 30 mins ahead of the Lenovo Yoga, and 3 hours behind Apple's MacBook Pros, but it's still a decent result. The Dell can handle working all day a web-browsing test with the screen at lesser brightness levels saw the dual batteries make it to the 10 hour mark.

On its own, the tablet lasted for almost 4 hours. Not as impressive, but it's still better than some clunky laptops manage.

There's no room for Gigabit Ethernet, but connectivity elsewhere is better, with dual-band 802.11ac and Bluetooth 4.0 a good selection for a business notebook. Physical connectivity favours the keyboard, which has 2 x USB 3 ports, an SD card slot and a mini-DisplayPort connector. The tablet has the headphone jack, and our sample has a smart card slot and a fingerprint reader but those latter two are optional extras.

Four gigabytes of RAM is ample for this class of machine, and businesses will be pleased with TPM 2.0 chip, as this has more security features than the more common TPM 1.2. It's got Intel vPro (remote management), NFC (wireless authentication), and an accelerometer (motion detection).

The Latitude's matte finish and 1,920 x 1,080 resolution are sensible office-based specifications. Brightness of 357cd/m2 means the screen is punchy under office lights and visible in sunlight, and it's backed up by a deep black level (0.3cd/m2). 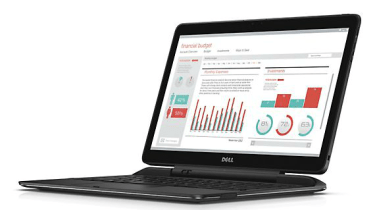 The contrast ratio of 1,170:1 is better than most laptops, and its aids colour depth every tone is rich, and it's easy to pick apart subtly different shades.

A Delta E of 1.31 is exceptional. It's one of the best results you'll find outside of dedicated workstation hardware and high-end monitors. If screen quality is a key consideration, this is the best we've seen on a hybrid.

Dell has opted for a detachable mechanism, and it's easy to use: slide a latch below the screen and the panel lifts free. The simple design extends to the aesthetic, where Dell has avoided extravagance there are a couple of logos and status lights, but that's it. The Latitude is black, grey and brooding, and it'll cut a serious note in any office.

Build quality is excellent, with a little expected flex in the thinner base and a sturdy back panel protecting the 13.3in screen. With its two halves clasped together the Latitude weighs 1.69kg and is 20mm thick. That compares poorly with the Yoga Pro 3, which tips the scales at 1.2kg and is 12.8mm thick. 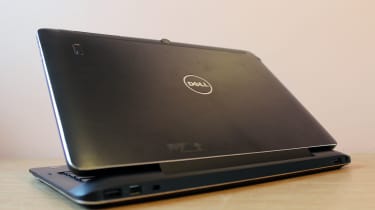 It's chunkier than some rivals, but the detachable design gives the Latitude an edge the screen's 930g weight is decent when compared to 2-in-1s from Toshiba and HP.

The only machines Dell's latest can't fight against are the proper tablets, which are lighter and slimmer. Apple's iPad Air 2, for instance, weighs just 440g, and its 9.7in screen makes it more manageable.

The sunken keyboard doesn't look like it would afford much travel, but that's not the case. The keys have good vertical movement, which helps typing feel solid and consistent, and the keys feel light but well-made.

Keys are as comfortable as anything we've used on a hybrid, and not far behind the best fully-fledged notebooks so if you need a hybrid to cope with a large workload, this is worthwhile. Our only complaint, the single-height return key, is minor. 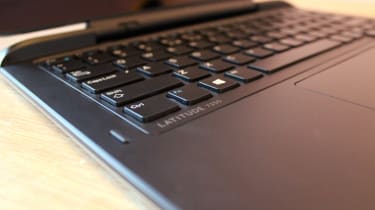 The trackpad is sensitive, but a quick trip to the control panel will fix this. Once it's toned down, the wide, smooth surface proves accurate and responsive, and the two built-in buttons have a pleasant snap.

We've reviewed a mid-range Latitude 13 7000 which initially costs 1,199 but rises to 1,230 because of the upgraded rear panel, which adds the smart card and fingerprint readers. Our sample also has a standard three-year warranty.

Two cheaper models cost 1,151 and 1,175. They've both got the same specification as our sample aside from a 128GB SSD, and the more expensive of this pair adds a next-business-day Pro Support warranty.

A version for 1,223 replicates our sample's specification but adds the improved ProSupport warranty. The priciest model costs 1,271 and only has a 128GB SSD and the basic three-year warranty, but it comes with a Core M-5Y71 processor clocked to 1.2GHz with a Turbo speed of 2.9GHz the fastest available in this new range.

A mobile broadband modem can be added for an extra 56, and accessories are available, with various options for carrying cases and docking stations.

Dell pairs the new chip with a fantastic screen, and the smart exterior is paired with a keyboard and trackpad with the quality to help get work done. There are plenty of business features, too.

There's no denying the high price of this machine, though, and proper tablets are still easier to work with than the Dell's detachable screen. But if you're in the market for a hybrid, this is one of the best available.

An all-round hybrid with a good screen and solid battery life.