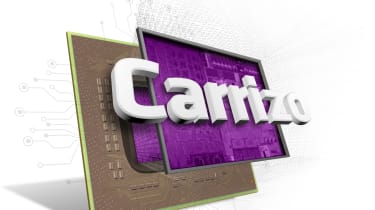 AMD is readying it's latest APU, which it claims will bring double digit battery life improvements and increased performance by optimising the use of the GPU.

Carrizo will be the first fully Heterogeneous System Architecture (HSA) compliant chip to be released. This means more workloads such as video indexing and pattern recognition will be executed by the GPU instead of the CPU. This not only increases performance, but helps to save power.

Overall, AMD claims the Carizzo chip will deliver 5 per cent more instructions per cycle than its predecessor.

- Carizzo supports H.265 giving it 3.5x the transcode performance over its predecessor

"Voltage variations have plagued processor implementation since they began. The current changes in the designs from GHz operating circuits induce voltage droops and glitches in the power delivery network. We can't deliver a perfect voltage to the circuit," explained Sam Naffziger, AMD corporate fellow, during a pre-brief.

"[The] traditional approach has [been to] simply margin the voltage by raising it, so the drop doesn't cause circuit failurethat means 20 per cent of power is wasted protecting from these droop effects."

Carizzo is designed to monitor power consumption constantly and if a power droop does occur, the frequency of the chip is reduced just long enough to avoid failure and before being returned to normal.

The voltage regulation system alone provides power improvements of between 10 and 19 per cent, Naffziger claimed.

AMD has yet to announce which devices the Carizzo chip will be shipped with but a source has indicated to IT Pro the firm has secured a big design win with Lenovo.