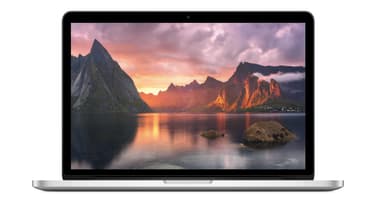 We've not seen many laptops that use Intel's new Broadwell processors, so we were a little disappointed to see that the new MacBook Pro didn't perform any better than its Haswell-based predecessor. In fact, it only managed an overall score of 78 per cent in our benchmark tests, compared to 81 per cent for last year's model.

However, the Iris 6100 did perform well for 2D graphics work, scoring 95 per cent in our Photoshop tests, and was only let down by its weaker performance in 3D graphics (53 per cent) and video rendering (63 per cent). To be fair, that performance isn't bad for the price, but if you want a more powerful quad-core processor or discrete graphics card for 3D design work then you'll have to step up to the 15in version of the MacBook Pro Retina. 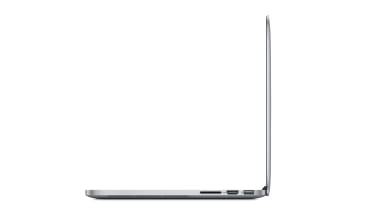 Battery life was exceptionally lengthy as we've come to expect from Apple laptops. It lasted just under 22 hours in our light usage test and an impressive ten hours and 21 minutes when playing a high definition YouTube video. The increase over its Haswell-based predecessor are small, but this lengthy battery life, combined with the laptop's light weight, make this MacBook a good choice for working on the move.

The 13in MacBook Pro isn't quite in the mobile workstation class and, try as we might, we don't find the new Force Touch trackpad as innovative as Apple seems to think it is. Even so, it provides solid performance at a competitive mid-range price as long as you don't need to buy too many upgrades and its outstanding battery live ensures that it will really earn its keep when you're on the road.

Its performance won’t break any records, but the improved battery life provided by Intel’s new Broadwell processor is genuinely impressive.