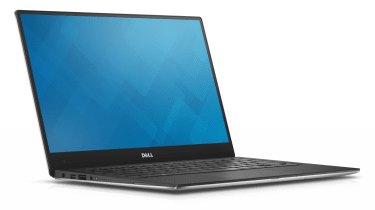 Dell's XPS line of laptops have long represented the top end of the company's notebook offering, providing one of the most tempting Windows-based alternatives to Apple's enduringly popular MacBook Pro devices. Its latest XPS 13 model is no different and has managed to one-up Apple in a few areas that makes it one of the most impressive high-end laptops we've seen in months.

The 1.3kg chassis is beautifully crafted while also feeling rugged enough to survive the rigours of frequent travel and repeated stuffing into bags. It's just 15mm thick, too, which makes it 3mm thinner than the MacBook Pro. The lid is made from aluminium and while it feels rock solid, there's definitely a risk of scratching it if you put the device in a bag with objects such as keys or coins. Keep it safe, though, and you have a very sturdy laptop on your hands.

The carbon fibre palm rest is an unusual but attractive design choice but, most importantly, it's smoothly molded meaning you won't get sore wrists from writing on it for hours on end. Elsewhere, the backlit keyboard is pleasingly weighted meaning it's easy to reach a very high typing speed. You won't be held back by missed keystrokes or stuck keys, either. The touchpad is one of Dell's best ever thanks to its perfectly judged dimensions and not-too-grippy material. It's very responsive, meaning moving items around the desktop and in applications is very accurate and rarely results in frustrated failed attempts that often comes with using a laptop touchpad.

There are two USB3 connectors, a 3.5mm headset jack, an SD card reader and a mini DisplayPort for connecting to external displays, giving the XPS 13 a par for the course in terms of connectivity.