A cheap and colourful 'cloudbook' laptop, but far from cheerful 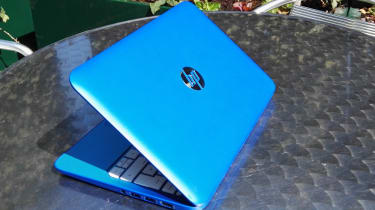 HP's Stream 11 stands out from the crowd with its flamboyant blue or bright purple casing. The wrist rest has a subtle polka dot pattern, with the colour getting lighter from top to bottom, but surprisingly it's not too distracting and it's sturdily made too.

The Stream 11 is very cheap for a Windows 8.1 laptop at just 180. Despite its low price, it's lightweight at 1.3kg and its battery lasted a lengthy ten and a half hours in our light usage test. This is very impressive for such a cheap laptop and is due in large part to the energy-efficient Intel Celeron N2840 processor.

Unfortunately the performance of this 2.16GHz dual core processor was unimpressive. It's too slow for demanding tasks such as editing photos or videos. This would be fine, but it also struggled with simple, everyday tasks such as web browsing and office work. Having several browser tabs or programs open at the same time was enough to bring the laptop's responsiveness to a shuddering, frustrating halt. All this is due not just to the slow processor, but also the fault of the measly 2GB of **memory which just isn't enough for a Windows computer. 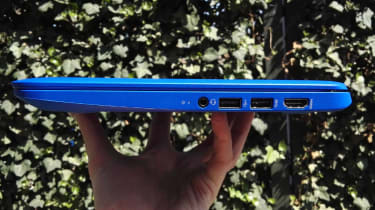 Among the extras is a one-year Microsoft Office 365 subscription included for free. You'll almost certainly need to rely on USB or online storage to store your files though as almost half of the 32GB SSD is already occupied out of the box. You get 1TB of OneDrive storage free for a year and 25GB of Dropbox storage free for six months. These weren't chosen at random - given the Stream's slow performance, you'll almost certainly have to rely on cloud-based web apps to get most things done.

The Stream's other pre-installed bundled software does feel more random. As Lenovo's recent Superfish debacle proved, Windows PC manufacturers still have a habit of stuffing their machines chock-full of pre-installed bloatware. HP is one of the worst offenders, and the Stream 11 comes with a laundry list of un-asked for apps including mysms, TripAdvisor, and six near-useless HP programmes.

Although the keyboard feels a tad spongy, it's comfortable to type on as the keys are large and give enough feedback and travel when pressed. The touchpad is far less impressive. Although big, it wasn't very accurate and sometimes had trouble distinguishing between when we were tapping a button and when we merely trying to move the cursor.

As expected, the screen looks washed out with poor contrast and tight viewing angles. It's reasonably bright, but we've seen other cheap laptops with more vibrant screens. The 1366x768 **resolution is relatively high for such a small 11.6in screen and could make text hard to read comfortably if you have diminished eyesight.

The Stream 11, and other very similar computers such as Toshiba's Satellite CL10, is an attempt by Microsoft to counter Chromebooks by cramming Windows into as cheap a laptop as possible. Unfortunately, the hardware just isn't up to it. If you want a cheap ultra portable, then you should opt for a Chromebook instead. If you're a die-hard Windows fan, then you'll just have to spend more to get a usable laptop - anything else would be a false economy.

The HP Stream 11 is a fantastic deal, perfect for office tasks and web browsing. While it doesn't have the brute force to run some higher-end programs, those that just need a machine to fire off emails and put together spreadsheets can't go wrong with this little beauty.