Mighty processing power and a huge price – is this workstation worth almost £3,000? 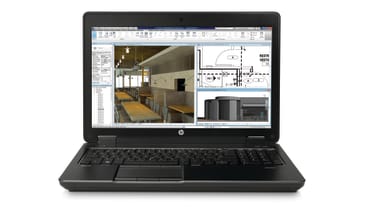 Laptops like Apple's Macbooks and Dell's XPS machines have raised the game when it comes to design, but the HP doesn't match its rivals in this department. The lid is clad in dark brushed metal and bordered with grey plastic, and the interior is similarly staid, with plain metal throughout. Exposed screws are found around the back, and the only sop to style seems to be the Hewlett Packard logo on the hinge.

It's heavier and thicker than the competition, too. The HP's 2.8kg weight looks chunky when stacked up against the 2kg Macbook and 1.88kg XPS, and the ZBook is 40mm thick. Dell and Apple's machines are a svelte 18mm and 17mm respectively.

You'll notice the ZBook weighing down your bag, but there's no denying its strength. None of the HP's edges flex or bend when stressed, and the screen is thicker and stronger than many competitors. Internal access is decent both memory slots, a spare 2.5in drive bay and a vacant 42mm M.2 socket are all accessible. 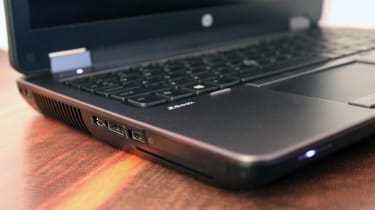 The exterior is versatile, too. There are four USB ports, a Blu-ray drive, a Thunderbolt port and an SDXC card slot. Businesses will be pleased by the ExpressCard/54 and Secure Digital slots, and there are DisplayPort and D-SUB outputs.

There's no getting past the ZBook's price, but different configurations can cut the cost. Cheaper Core i7 processors save hundreds, and three different graphics chips come from Nvidia and AMD and all cost less than this machine's Quadro.