This hybrid is a sleek, fast computer that's let down by some poor design decisions 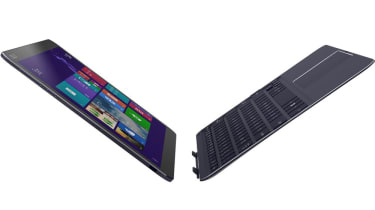 Although Intel's fanless, highly power efficient Core M processors were supposed to herald a new generation of ultra-thin laptop-tablet hybrids, such computers have been relatively thin on the ground. The Asus Transformer Book T300 Chi is one of the first Core M-based detachable hybrids we've seen and, as expected for an Asus device, it's certainly the most attractive we've seen so far.

We were greatly impressed with the T300's construction. The smooth dark blue metal looks elegant, with the finely chamfered edges adding a lot of class, and it feels sturdy too.

Although the combined weight of 1.45kg is heavier than it initially looks, it's still lightweight compared to other similarly sized laptops.

It weighs around 750g in tablet mode, which is on the heavy side compared to many of its admittedly smaller 10 inch competitors. It's not too much of a problem however, unless you're planning on holding it single-handed for long periods of time. It's among the thinnest hybrids out there, too just 16.5mm thick with the included keyboard attached. 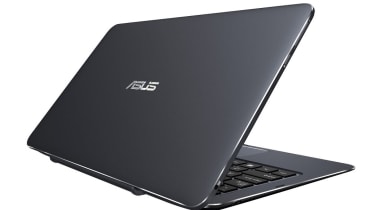 Unlike convertible 2-in-1s such as the Lenovo Yoga Pro 3, the Transformer Book range uses a detachable keyboard to swap into tablet mode rather than a 360-degree hinge.

However, in laptop mode the T300's hinge only opens to around 120-degrees. This is incredibly irritating and is limiting compared to traditional laptops. It often made it difficult to obtain a comfortable viewing angle.

On the other hand, the connectors that keep the tablet portion secured to the keyboard are impressive. Magnetic locks ensure that it's fully secure when in laptop mode, yet easy to separate and re-attach in tablet form.

The T300's keyboard, sadly, is one of its biggest flaws. For starters, while the tablet is made out of metal, the keyboard dock feels like it's made out of cheap and tacky plastic.

More importantly, the keys themselves didn't have quite enough travel. There's also no backlighting, which is a shame for a device that's this light and is therefore likely to be used out and about in dim lighting. 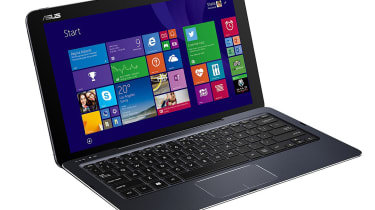 It's poorly balanced, too. The screen is much heavier than the keyboard, which means it's liable to topple backwards at the slightest nudge. It's a problem common to detachables, but it's particularly egregious in this case. This also led to a frustrating wrestle in laptop mode with the two halves every time we needed to prise it open.

At least the touchpad was surprisingly good its high responsiveness makes it one of the better touchpads we've seen on a detachable hybrid.

The T300 comes with full-fat Windows 8.1 pre-installed and is eligible for a free upgrade to Windows 10. Annoyingly, there's also a lot of Asus bloatware, but one useful extra is that Asus does offer is 1TB of cloud storage to augment the 128GB SSD. It's free for a year after which it costs US$100 annually. Although this pricing is on par with other cloud storage providers, there's little reason to choose Asus' online storage over other, better known cloud storage services once the free year is up.

We're not fans of the 12.5in screen's 16:9 aspect ratio as it feels too tall when using the T300 as a tablet in portrait orientation. It feels more comfortable when used in landscape orientation. 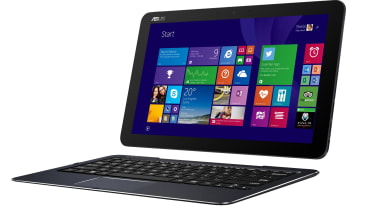 Image quality was superb. Colours appeared rich and vivid, contrast was spot on and text is pin-sharp thanks to the 2560x1440 resolution. It was also more than bright enough for reading outside in the sunshine.

Due to the T300's slender profile, there isn't room for any full-sized USB ports - just a single micro USB3 port. You'll have to use a USB-On-The-Go adapter to connect USB sticks and other peripherals. Although such adapters are cheap, widely available and compact, having to use one is still inconvenient unless you've fully moved over to wireless peripherals and cloud storage.

As the T300 has a micro HDMI port, you'll also need another adapter to connect projectors, TVs and monitors. 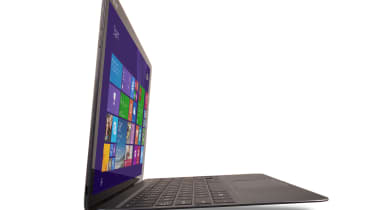 Included with the T300 is a stylus, but it doesn't work terribly well. Dell's Active Stylus and Microsoft's Surface Pen are both far superior.  Although Asus claims 256 points of pressure sensitivity and palm rejection technology, the tablet is iffy about when it will register a pen-stroke as a legitimate input. It's almost there, but it's still finicky enough that using it is a bit of a pain.

The T300 comes in several different configuration at this price, it comes with a 1.2GHz Intel Core-M processor, 8GB RAM and a 128GB SSD. The Core M processor obviously isn't as fast as a Core-i5 or i7 processor, but it was beefy enough to handle office work, basic image editing and heavy web browsing with no noticeable slowdown.

Unfortunately, the T300 has a tendency to heat up noticeably during use, to the point where holding it becomes quite uncomfortable despite promises of advanced cooling technology from Asus. It's rather disappointing.

Asus has had to make some sacrifices in order to get the T300 looking this slim, and unfortunately, one of those is the battery. In our tests, the T300 managed to last a shade over 6 hours, which puts it well behind what we'd expect from a laptop is very disappointing for a computer designed for use this while out and about. Be prepared for an awful lot of socket-hunting.

The T300 Chi is very average. It's a good enough tablet, as long as you don't mind its heavier weight, plus it is fast and has a good quality screen, But it's let down by its poor keyboard, short battery life and restricted connectivity options, making it an average laptop at best. All of this makes it very mediocre value as a less than stellar laptop, it can't really justify its high price leaving it as a niche product for those who want a tablet running Windows above all else.

The Asus Transformer Book T300 Chi isn't bad as a tablet, but it's not a very good laptop making it middling value at best.