Small but not perfectly formed 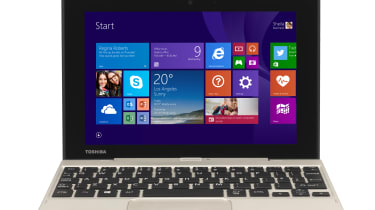 We're big fans of 9in tablets. We think they strike the right balance between having a satisfyingly large screen, setting them apart from even the biggest phablets, while still remaining light and easy to hold.

Frustratingly though, 9in tablets are thin on the ground. There's the consumer-oriented and somewhat limited Amazon Fire HDX 8.9 and the HTC-built Google Nexus 9 which would be perfect if it wasn't for its surprisingly poor build quality.

Now there's the Toshiba Satellite Click Mini, the first 9in Windows 8.1 tablet that we've seen. It comes with a keyboard dock, so it's also a detachable hybrid. It's still very small with the keyboard attached, around the size of a netbook, so it's more compact than all but the tiniest of ultra portable laptops.

While the Click Mini has a very small footprint, it is far from svelte. Its combined 20mm height is downright chunky compared to some other 2-in-1 hybrids. 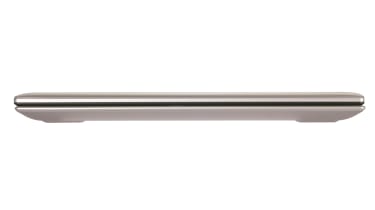 The tablet and keyboard dock are equally thick at around 10mm each. Although chunky, this is justified by the ports available on each. The keyboard dock packs in an additional battery as well as a full-size USB2 port and SD slot. This compliments the micro USB2 port and micro SD slot on the tablet itself, although it's a shame neither has USB3.

As a laptop it weighs over 970g which is in the same range as dedicated 11in and 12in ultra portable laptops. It wouldn've been nice to see a lighter weight given the smaller screen size, but it's still easy to carry around for extended periods.

The Click Mini is easily one of the most balanced hybrids we've seen, with the weight divided almost exactly between the tablet top half and the keyboard dock. It feels far less likely to topple over inadvertently unlike many other detachable hybrids we've seen.

The Satellite Click Mini's docking mechanism is perfectly secure, so it's unlikely you'll accidently undock the tablet from the keyboard especially as you need to unlock it by pressing a button. This also means undocking is a two-handed manoeuvre. 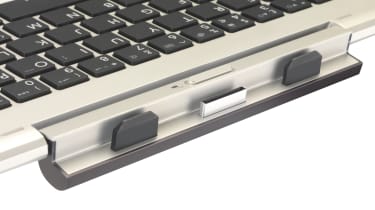 This keyboard has nicely textured keys. They could do with more travel, but there's still enough that the keys are responsive and we've certainly seen worse. A bigger problem is the keys' small size, necessitated by the keyboard dock having to match the compact width of the tablet. The result is that typing on the Toshiba Satellite Click Mini will be uncomfortable if you've got medium to large sized hands.

Doing any serious typing in tablet mode is also difficult; in landscape mode, the onscreen keyboard fills half the screen. It's a little better in portrait, but not significantly.

The plastic casing is available in either white or gold. Although not especially rigid, it feels sturdy enough - especially given the low price.The screen only tilts back to around 110 degrees. That's not great for a hybrid as small as this, as we kept having to hunch over it in order to get the best viewing angle. 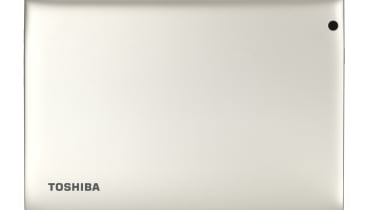 The 8.9in display is surprisingly good quality the 1920x1200 pixel resolution means everything looks crisp and sharp. The viewing angles are wide too.

The brightness is underwhelming, though, so visibility suffers outside. The high resolution also means that text has a tendency to appear small and difficult to read, which results in a fair amount of squinting. Colour accuracy was merely so-so. Colours were muted and blacks were washed out, while whites were rather grey-ish.

The screen surrounds are quite wide: over half an inch on every side. This makes it easier to hold without inadvertently tapping the touchscreen.

Unsurprisingly, given its low price, the Satellite Click Mini isn't fitted with top-notch components. A scant 2GB of RAM and a 1.33GHz Intel Atom processor provide the unimpressive horsepower.

Although it's just about good enough for running touchscreen tablet apps, the processor will struggle if you put it under any strain. The performance is far slower than we'd like, so it has little chance of replacing your existing laptop or desktop unless you're only interested in very basic tasks.

The Satellite Click Mini's battery life wasn't very good. In both our light usage and H.264 video playback benchmarks, it averaged around six and a half hours in tablet mode. That's very poor.

The keyboard dock's battery provided an extra six hours of juice, pushing the total up to 12 and a half hours in each test. That's more respectable, and we're glad to see you can get a full day out of it, although we expected longer given the power-efficient Atom processor. 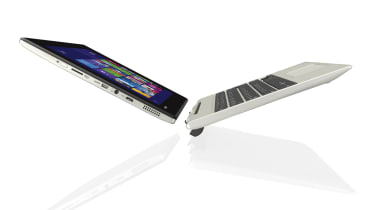 It's worth noting that the battery life was far shorter in our YouTube streaming test. The Click Mini averaged just six hours while looping a video over WiFi and that's with the aid of the keyboard dock and its second battery. It's worth putting this result in context though it's actually one of the longest times we've seen so far for a Windows computer in this demanding test.

The Click Mini is very cheap, especially considering it comes with a free one-year subscription to Microsoft Office 365, but this isn't enough to overcome its main failing and it is one that hybrids consistently face: it tries to be both tablet and laptop, and ends up not doing either particularly well. It's serviceable as both the keyboard is good enough for taking quick notes on or typing up an email, and the screen is good enough for enjoying social media and videos in tablet mode but it's not a barnstorming replacement for both a standalone laptop and a dedicated tablet, merely an okay-ish substitute if you can't afford anything better.

It's small and it's cheap, but numerous compromises made in pursuit of its compactness and low price means the Satellite Click Mini is fine as a backup machine but little else