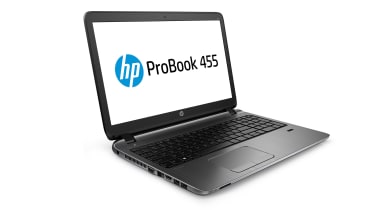 The less you spend on a laptop, the higher the percentage of the asking price is consumed by a Windows licence. While Microsoft is of course entitled to charge for its operating systems, there are savings to be had if you're willing to forego the familiarity, but also the complexity of this for-profit OS.

With more and more workplaces and consumer applications moving to the cloud and, as a consequence, to the web browser, Windows' importance has diminished somewhat. If you've become heavily or entirely dependent on cloud-based webapps, then it almost doesn't matter which operating system you use. Despite this, there are relatively few Linux-based laptops (unless you count Chromebooks). The HP Probook 455 G2 is one of the very few we've seen running the Ubuntu 12.04 operating system and is available exclusively, as far as we know, from Ebuyer.

Although version 12.04 (Precise Pangolin) seems a long way behind the latest 15.04 (Vivid Vervet) version of Ubuntu, 12.04 is a Long Term Support release. This means it's guaranteed to get security updates until early 2017 much longer than standard releases of Ubuntu.

Without delving into chicken/egg debates, if you've ever used Apple's Mac OS X then you'll find Ubuntu very familiar as there are more than a few design similarities. They're far from the same of course, but it makes for an easier transition if you're used to Mac OS X. The menu bar runs along the top of the screen, with status icons for battery, email, Wi-Fi, Bluetooth and time all displayed in the top right-hand corner. Applications sit in a static dock on the left-hand side of the screen. 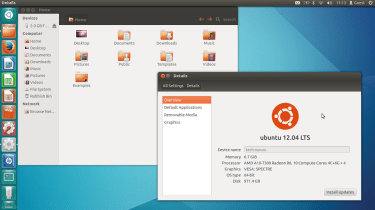 Hitting the Windows key (yes, there's a Windows key as the Probook 455 G2 is also available with Windows) will open up the search bar. You can search for items on your computer or type in a web address to be opened in Mozilla Firefox, which is the default browser here. 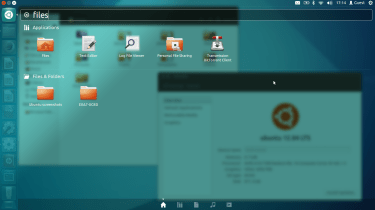 The laptop comes pre-installed with the open-source LibreOffice, which is compatible with the latest Microsoft Office formats. It's less refined than Microsoft's suite, but it's still more than good enough for most word processing, spreadsheets and presentations tasks, You also get Mozilla Thunderbird, a free email client that integrates itself into the status bar. 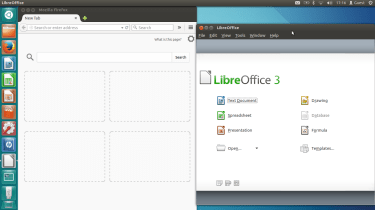 One of Ubuntu's most useful features is virtual desktops, or Workplace Switching as Ubuntu insists on calling it. This makes it much easier to multitask on one screen, although this feature has been present in Mac OS X for many years and has finally made it into Windows 10. 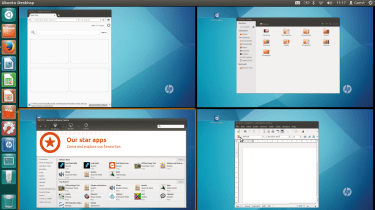 The virtual desktops built into those rival operating systems are more elegant though. You can use touchpad gestures, as well as keyboard shortcuts, to switch between different virtual desktops. Oddly, Ubuntu 12.04 is limited to just four virtual desktops in total unless you tinker around with command line settings a limitation that doesn't apply to Windows 10, Mac OS X and, to be fair, later versions of Ubuntu..

Ubuntu also has a feature similar to Windows Snap, so you can quickly position two windows side-by-side using either a mouse gesture or keyboard shortcut. It doesn't work quite as smoothly as Windows Snap, but it's still very useful to have.

An easy way to find and install more programs is the pre-installed Ubuntu Software Center. While it's full of video players, email clients, web browsers, games and system configuration tools, it's more threadbare when it comes to business software. Some basic Access-related tools and utilities are available, but if you want CRM or Visio-compatible diagramming software then cloud-based options are your best bet. 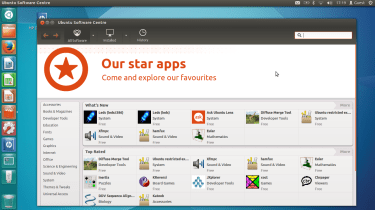 The Probook 455 G2 is an otherwise by-the-numbers budget laptop. We like the soft-touch, matt black lid which feels sturdy and looks stylish. The casing takes on a faux brushed metal-style around the keyboard which looks great, although the keyboard itself leaves a little to be desired. The keys are fairly slippery to the touch, and we occasionally missed a few keystrokes when typing for longer periods. 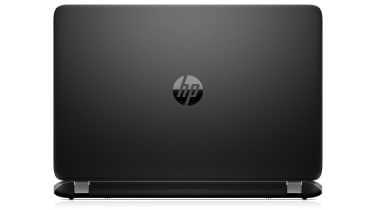 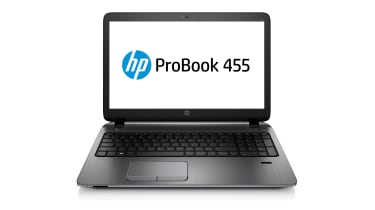 The touchpad has delightful physical buttons with plenty of travel, and the touchpad itself is for the most part very responsive. The only area where the touchpad requires improvement is scrolling. On its default setting, it's almost impossible to coerce the operating system into detecting the two-finger swipe gesture needed to scroll up or down. Crank up the sensitivity to the max and you'll get a much better, but still rather laggy, performance. It's this sort of frustrating touchpad that makes us long for the touchsticks you sometimes see on ThinkPads and some Toshiba laptops.

The laptop weighs 2.1kg and is fairly chunky at 22mm thick, so it's not our first choice for working on the move regularly. At least the battery life is up to scratch if you do decide to travel with it the battery lasted seven hours and 35 minutes in our light usage test.

On the left-hand side of the laptop are two USB3 ports, a Gigabit Ethernet port as well as HDMI and VGA connectors for attaching external displays. The right side, meanwhile, is mostly dedicated to the DVD drive but there's also room for a pair of USB2 connectors and a 3.5mm headset jack. There's also an SD card reader on the front edge. 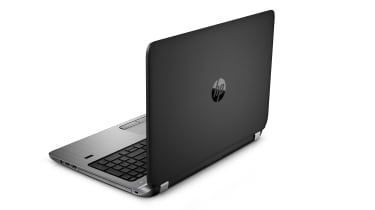 The 15.6in screen has a cramped resolution of 1,366x768 which makes it a little tricky to work in multiple windows simultaneously, although using virtual desktops helps here. Text appears large and legible, at least. The screen has fairly narrow vertical viewing angles, so you'll need to adjust the screen angle carefully. Colours look dull and contrast isn't very high, but the screen does have a matt coating so it's well shielded from reflections caused by overhead lighting and sunlight. There's some backlight bleed on the bottom of the screen, but it's not hugely bothersome.

The Probook 455 G2 is powered by a quad-core AMD A10-7300 running at 1.9GHz alongside 8GB of RAM. You'd expect reasonably sprightly performance from such a lightweight operating system, but we actually found the PC bogging down a little more often than we'd like. We suspect this is partly down to a sluggish 1TB hard disk, but it's still slightly disappointing. Web pages open with a bit of a stutter and programs take several seconds to load. Overall, though, performance is acceptable, if not stellar.

The HP Probook 455 G2 with Ubuntu is  very affordable, but even without the expense of Windows it feels a little cheap and lacks polish in various places from the hardware to Ubuntu itself. It's by no means bad, but unless you specifically need Linux then a good Chromebook would be a better value and better designed Windows alternative as long as you're happy to work exclusively in the cloud.

A cheap Linux laptop, but both the software and hardware need more finesse