The first 15in Chromebook 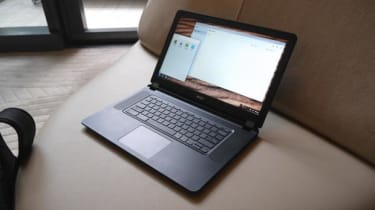 All of the Chromebooks we've seen to date have been lightweight ultra portable models with screens measuring 13in or smaller. Acer has taken a different tack with the Chromebook 15 C910, the first 15in Chrome OS laptop.

This might sound bizarre at first, but it makes sense given the continuing popularity of 15in laptops. Many people simply prefer the bigger screen size as it makes everything easier to see. Although the Chromebook 15 is chubbier and heavier than its smaller cousins as a result - weighing in at 2.2kg - this isn't a huge problem if, like most 15in laptops, it'll spend most of its time in the home or the office. 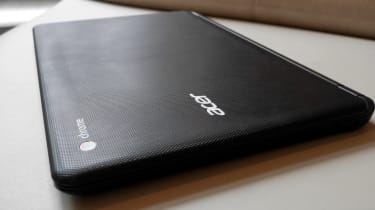 The Chromebook 15 does have the stamina for working away from a wall socket if need be. When used for simple tasks in relatively undemanding webapps such as Google Docs, Google Play Music, Wordpress and Pixlr, it lasted nine hours and 42 minutes. Although it's somewhat disappointing that this isn't any longer than lighter and thinner Chromebooks with smaller batteries, it's still lengthy and comes close to matching Acer's claims.

Given the low price, we weren't expecting much from the 15in screen. It's not especially bright, but contrast and colour accuracy are reasonably good for a budget laptop display. Although the 1366x768 resolution in a screen this large means text looks fuzzy, it is at least very legible unless your eyesight is completely shot. A 1440x900 or 1600x900 resolution would make better use of such a relatively large screen, especially when multi tasking, but sadly such resolutions are unheard of in cheap laptops.

While the keyboard is large, the keys felt a little too spongy. They still gave enough feedback, and had enough travel, for quick, accurate and comfortable typing. We had no complaints about the touchpad, especially as its puts the touchpads on comparably priced Windows laptops to shame. It's large with accurate tracking, clicky buttons built into the pad itself and basic but smooth, responsive gestures such as two-fingered scrolling and tapping with two fingers to show contextual menus. 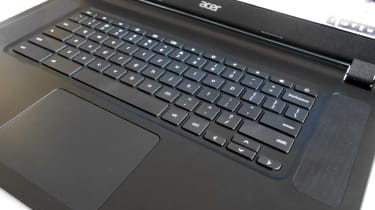 Although our review unit came with 32GB of storage, only the 16GB version is widely available. This isn't a problem if you've fully bought into Chrome OS's vision of totally cloud-based computing, but it's inconvenient if you need to ensure you have access to lots of video files and documents when you're offline. You can, of course, use external storage instead - the Chromebook 15 has a USB3 and a USB2 port alongside its SD card slot. 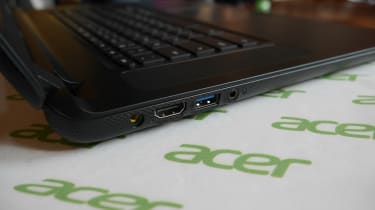 The Chromebook 15 is surprisingly attractive for such a cheap laptop with a pleasing crosshatch pattern on the lid and underside. The chunky base is sturdy, but the lid is far less rigid as it flexes easily under pressure. 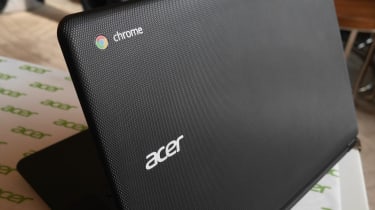 Apart from some ARM-based Chromebooks, we've rarely seen any Chrome OS computer struggle with general web rendering, running webapps or providing a smooth and responsive interface. The Chromebook 15 certainly had no trouble thanks to its Broadwell-derived dual-core 1.5GHz Intel Celeron 3205U processor and plentiful 4GB of memory. If nothing else, that much memory ensures your tabs won't need to be reloaded very often.

If you've been tempted by the simplicity and hassle-free nature of Chrome OS but wanted a bigger screen, then the Acer Chromebook 15 is for you. We do wish Acer had been more ambitious, opting for a brighter, higher quality, higher resolution screen, even if this had pushed up the price, rather than retreading old ground and taking the easy way out. The Acer Chromebook 15 isn't an exceptional Chrome OS laptop, but it's good enough.

It’s not any faster, longer-lasting or cheaper, but if you value screen size above all else then this is the Chromebook for you