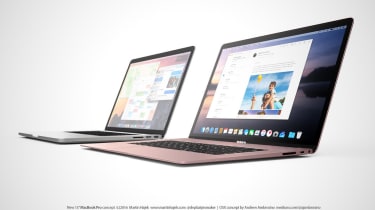 Following the release of its 12in retina Macbook in 2015, Apple is through to working on next versions of its MacBook Pro to be released in late 2016.

In this article we will be rounding up news, rumours about the 2016 MacBook Pros.

15/06/2016: Apple's next MacBook Pros could be fitted with an OLED touch bars, new details suggest.

Last month, rumours emerged that Apple's is planning major revamp of its Macbook Pros, and may include, of all things, an OLED touch bar above the keyboard. It has already made for some stylish-looking concepts.

Now, code in the new masOS Sierra appears to corroborate those rumours further, as French site Mac Generation (translated by 9to5 Mac) reports.

Several new options are prefaced by the term "kHIDUsage_LED".

Among them is "kHIDUsage_LED_DoNotDisturb" an option that appears to suggest a dedicated LED Do Not Disturb button. The Do Not Disturb button can already be accessed via the Mac's notification settings, but having quick access to this function on an OLED display would make sense.

As well as this, other toggling options point to a camera on/off switch, caps lock, night mode, play and pause, rewind and fast forward, and data mode.

The OS also makes reference to biometric input methods, backing up another earlier rumour that a Touch ID fingerprint sensor would be coming to the new MacBooks.

Simply because the functions currently exist in the code does not confirm hardware is on the way. Although, previous discoveries have come true. In 2013, resources in the iOS 7 beta pointed to a biometric sensor for the next iPhone, which was realised months later with Touch ID in the iPhone 5s.

Having not been announced at Apple's WWDC 2016 briefing this week, the earliest we are likely to hear about Apple's shake up its MacBook line is in September, during its iPhone announcement.

Rumours have suggested that Apple will be using its keynote at WWDClater today to announce updates to certain members of its MacBook range, and thanks to graphic designer Martin Hajek, we now have an idea what they could end up looking like.

Back in 2015, Apple took the wraps off its reimagined, redesigned 12in MacBook. The result was a stunning ultraportable, with an all-metal chassis and the slimmest, lightest dimensions ever seen on an Apple notebook.

Apple is now expected to refresh its larger MacBook models - possibly including members of the MacBook Pro and MacBook Air families - to incorporate these design values.

Martin Hajek (also known as @deplaatjesmaker) has produced 3D concept renders of the what a new 15in MacBook Pro might look like, based on the visual design of the 12in MacBook.

For the purposes of comparison, Hajek has pictured the new MacBook Pro next to the current Retina MacBook Pro, as well as the redesigned 12in MacBook.

Like the new MacBook, many of the ports on Hajek's MacBook Pro have been replaced with multifunctional USB-C ports, including the charging, Thunderbolt and USB ports. 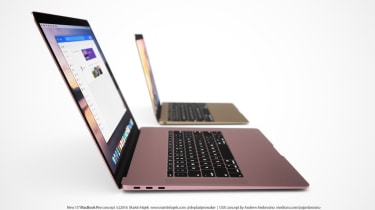 However, while the 12in MacBook has only one USB-C port - meaning you'll need a splitter if you want to connect a USB drive and charge your device simultaneously - Hajek's updated MacBook Pro has a comparatively generous four.

Hajek has also opted to keep the 3.5mm headphone jack and an SD card reader, neither of which the 12in MacBook has.

While Hajek's renders are essentially speculation at this point, an updated MacBook Pro is a strong possibility, and will more than likely end up looking not dissimilar to these images.

We'll know more after Apple's WWDC keynote address, which you can read more about here.