This is no minor update: Lenovo makes the already excellent X1 Carbon smaller and lighter 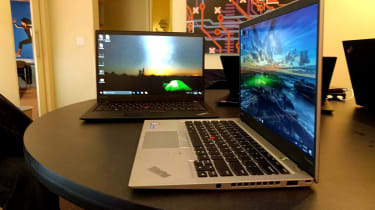 Don't be fooled. While the name stays the same, the 2017 version of Lenovo's already brilliant ThinkPad X1 Carbon just launched at CES 2017 in Las Vegas is a major upgrade. It's lighter, faster, more compact, lasts longer, and offers better connectivity. If you recently bought the X1 Carbon, you may want to stop reading to avoid some major jealousy pangs.

I played with the X1 Carbon in a private briefing away from the CES showfloor, and were it not for the product manager keeping a watchful eye would have happily swapped it for the Dell XPS 13 in my bag.

Lenovo's most impressive feat is to include a 14in screen in a chassis that weighs 1.1kg and is actually 12mm less deep than last year's model. To perform this magic trick, it's shrunk the bezels (which makes the screen look even bigger), but if you fear that means the same sacrifice as the XPS 13 where the webcam moved to a double-chin-enhancing position underneath the screen then fear not. It's in its rightful place at the top.

There's no touchscreen option for this, and the option of OLED, you'll need to buy the also-updated X1 Carbon Yoga but the IPS screens Lenovo uses are both bright and high-quality. A Full HD resolution still looks fine on a 14in display, but if your eyesight is good enough then there's a 2,560 x 1,440 version too.

The key reason for sticking with IPS technology is battery life, as Lenovo claims that these variants of the X1 Carbon will last for more than 15 hours. Even if that turns out to be a tad optimistic, it's a four-hour boost over last year's model and comes, in part, due to a 57Whr battery inside versus last year's 52Whr unit.

IT support teams will also love the fact all 2017 ThinkPads come with a built-in diagnostic mode: press the Fn key on a "dead" machine and a series of beeps will tell an app, or a Lenovo technician on the other end of the phone, what kind of fault has happened and provide recommended steps to fix it. 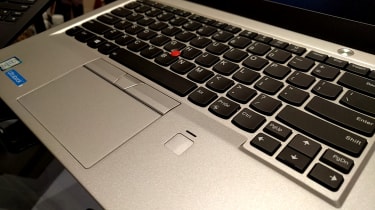 The fact this year's model also includes seventh-generation Intel Core processors (another reason why battery life has improved) becomes a by-the-way rather than a key new feature, but take greater note of the two USB-C ports with Thunderbolt support that now sit on the left edge. For convenience, there's a full-sized HDMI and two USB 3 ports too. There's no full-sized SD card slot, which may irritate some, but compensation comes in the removable caddy at the rear, which can hold both microSD and nano SIM cards.

It's safe to say that there's much to like about the new ThinkPad X1 Carbon. In the same way that Dell created a 13in laptop that felt like a 12in machine with the XPS 13, Lenovo has created a 14in laptop with the weight and dimensions of a 13in device. With the same great feel to the keyboard as every ThinkPad, and a touchpad that now supports the Microsoft Precision spec, this is a machine that power users will adore. And should you like such things, it's now available in silver as well as the trademark ThinkPad black.

Up to Intel Core i7 7th gen processors

Up to 16GB LPDDR3 memory

Up to 1TB SSD storage