A solid business device with an unnecessary QHD screen 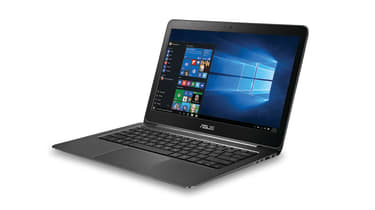 Launched almost five years ago, you may be a little surprised to see that we're still avid fans of the Asus Zenbook UX305.

The latest version has moved on from the original notebook, but it has kept its best features - portability, functionality and its low price point in comparison to similar set-ups.

Some consider this as the cheaper alternative to the MacBook Air, but it should be considered a feat in its own right, mostly because its design gives the MacBook a run for its money, even though its features probably aren't as advanced.

The premium version of the UX305, the UX305CA offers up a little more than the standard version. There's a more powerful processor, a bump up to 256GB of storage on its SSD and 8GB of RAM. All contribute nicely to its boosted performance.

Its screen is also more superior, boasting a 3,200x1,800 pixel display - certainly something worth viewing before ruling this little number out and a vast improvement on its predecessor in our opinion.

Both the standard and premium version of the Asus Zenbook UX305 is finished with a beautiful anodised aluminium casing, resemblant of the MacBook Air. However, it's lighter than Apple's cheaper laptop, weighing in at 1.2kg, with a thickness of just 12.3mm, compared to the MacBook's 1.25kg and 15.6mm thickness.

Although it's light, this doesn't mean it's not sturdy and the Asus Zenbook UX305 certainly doesn't feel as if it would break particularly easily. The edges are nicely rounded, rather than the sharper edges of the MacBook Air and this offers a premium finish that we've already touched upon above.

One big difference between the Asus and the Apple is that Asus' ultra-light notebook is available in three colours - Ceramic White, Aurora Metallic and Obsidian Black, which all add a little personality. Our review sample was in the latter colourway, with a spun metal effect on the outer casing. It's something usually only seen on the higher-end Asus devices, so it's pleasing to see this on a lower-end device too.

When opened you will immediately notice that the overlapping screen creates a small lip that ever-so-slightly raises the keyboard. This not only provides a neat way of improving airflow, but also helps make typing noticeably easier. Much like the MacBook air, the exhaust grills are hidden just in front of the hinge, meaning there are no unsightly vents spoiling the aesthetics.

The base of the UX305CA is strikingly similar to the MacBook Air, with its slightly sunken keyboard and centrally placed hinge. It is also just as easy to type on, as the chiclet keys are given ample spacing and are all appropriately sized, so we experienced very few miss-types. The base is also covered with a slightly grainy texture, which provides a pleasant surface for resting your hands while typing.

A significant oversight is the lack of backlighting, which is something customers have come to expect for ultrabooks in this price range. Not only does it add that little extra in terms of luxury, typing in dark rooms is near-impossible without it. It does suggest a smattering of cost-cutting on an otherwise premium-looking ultrabook.

The touchpad is a generous size and the pleasant coating to its surface makes it comfortable to use. Asus has also included some smart gestures, including swipe scrolling for web pages, which help make the experience that much easier. The pad does suffer from a little too much surface friction, and a smoother pad would have been welcome.

However, the biggest issue I found was with the left and right clicks, which give satisfying feedback when pressed but require just a tad too much force. This makes using the pad with one finger a bit of a chore, compared to the easy click of a MacBook Air.

The model we reviewed came with a fairly standard 256GB SSD, 8GB of RAM, although a version is available with 128GB and 4GB RAM. Models with QHD or FHD displays are also available, with or without touchscreens.

Asus seems to have recognised that the Core M-5Y10c processor, although offering low-power consumption and heat output, was just a tad too sluggish in the UX305. Instead, the newer model has been fitted with a Skylake M3-6Y30, offering a bump up from 0.8GHz to 0.9GHz, with turbo boost potential of 2.2GHz. While only a small increase, it is certainly welcome, although don't expect the power output of the Core i5 or i7 model variants.

Benchmarking showed moderately worse performance than the Zenbook UX305, which is surprising given the slightly beefier processor. The M3-6Y30 managed a score of 19, one point lower than its predecessor, though the same processor in the HP Spectre X2 scored a 23. This suggests some bottlenecking somewhere, likely due to a need to keep temperatures to a minimum. However, this still provides enough juice to get great performance on general tasks.

The SSD is suitably nippy, providing boot speeds of around 16 seconds, while the 8GB of RAM provides more than enough memory for multitasking. Our tests only revealed slight slowdown with more than 15 browser tabs open, more than 10 apps running including Microsoft Word and Netflix, and an active install. In other words, for day-to-day business use, the machine is more than capable of handling anything you throw at it. This speed means if you need to change work location, the ultrabook can be closed and will awaken from sleep mode in seconds.

Battery life is a little disappointing though, lasting 7.5 hours with continuous web browsing and playing a streamed video. With most coffee shops and train services limiting access to charging points, if you are on the go a lot, the battery life is short enough to be a niggling worry. The culprit is likely the choice of a 44Wh battery, which is surprisingly stingy given the 56Wh batteries available in Dell and HP ultrabooks. Additionally, the higher resolution screen is almost certainly a drain on overall battery life.

The UX305CA comes with three USB 3.0 ports, which is pretty generous given the thickness of the device. You also get a headphone jack, SD card slot and a micro-HDMI port for external displays. For anything else, you're out of luck, as there are no USB Type-C ports or opportunities for Thunderbolt 3 connections. As for networking, this is covered by an 802.11ac WiFi card and Bluetooth 4.0.

The version we reviewed came with a 13.3in 3,200x1800 resolution QHD IPS touchscreen display, although a 1920x1080 version is available. The screen offers incredible detail for images and movies, while retaining a surprisingly crisp view from most angles, given that it has a glossy finish.

The screen is also incredibly bright and provides auto adjustment levels that can be toggled on or off using the keyboard. Asus states that it can achieve a brightness of 300cd/m2, however our own benchmarking revealed white levels of 409cd/m2. Yes, this ultrabook can get exceptionally bright, although the auto adjust feature will serve you very well for day to day work.

Though there can be no argument that the screen is a beautiful addition, the QHD upgrade feels unnecessary. The first issue you will encounter is the lack of reliable scaling options. Windows 10 will require some tweaks to scale up to QHD, otherwise menus will appear slightly blurry. Additionally, Windows still has a problem with scaling third-party apps, and so you may find that programs such as the Adobe suite will not scale correctly and appear extremely small on screen. The high resolution is also a likely source of added battery drain, which may account for the unimpressive results.

What is also unnecessary is the inclusion of a touchscreen, which, while perfectly functional, provides almost no benefits over a standard display. We have yet to be convinced by the need for a touchscreen on a non-convertible device, and the UX305CA does nothing to change that. Thankfully a non-touchscreen model is available for both the QHD and 1080p versions.

This is also not a gaming device, and using the modest onboard graphics you won't be able to take advantage of the QHD screen. The integrated Intel HD 515 graphics chip provides a meaningful boost over the Intel HD 5500 in the UX305, but in reality you won't be playing anything other than low demand indie titles on this device, unless you scale it right down to 720p.

The portability and fast boost speeds serve business users exceptionally well, though the inclusion of a QHD screen feels like an unnecessary feature that only hikes up the price. With a price tag of around 749, you may wish to save some money and go for the 1,920x1,080p version that is currently available featuring the exact same internal specs for 100 cheaper.

Looking at other alternatives on the market, the QHD version does not hold up well to competition. For the same price you could go for an HP Envy 13, which comes with a more powerful 7th generation i5 processor, keyboard backlighting and a slightly larger SSD, while opting for a more sensible 1080p resolution screen.

The Asus UX305CA ultrabook is simply an updated model to a genuine MacBook Air replacement. It can handle word processing and web browsing with ease without getting hot; though don't expect to be doing any video rendering or high-end gaming. It features an excellent keyboard and a decent trackpad that are both very comfortable to use.

But, with a QHD and some niggling cutbacks, such as the lack of a backlit keyboard, we're reluctant to recommend this ultrabook over others on the market.

The upgraded UX305CA brings some welcome hardware and quality of life changes, including an excellent keyboard that makes typing a joy. But the head-scratching inclusion of a QHD screen hikes the price up too high to remain competitive. Stick with the 1080p version or explore alternative options.