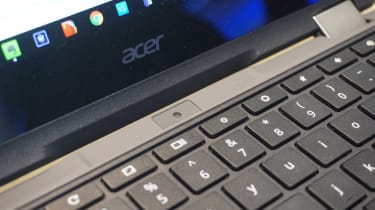 Google showed off a trio of new Chromebooks from Acer, Asus and Dell at Bett 2017 today, all featuring convertible designs, stylus support and USB charging that mark a shift in laptop form-factors for schools.

The Acer Chromebook Spin 11, Asus Chromebook C213 and Dell Chromebook 11 all eschew the classic clamshell design in favour of ruggedised, convertible touchscreen laptops that feature a low-cost stylus, USB C for easy and fast charging, and a camera in an odd spot - directly above the keyboard. 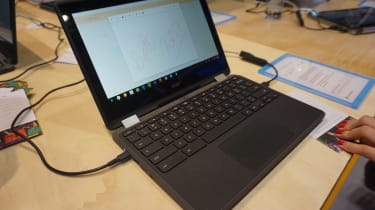 That camera is there at the request of teachers, who told Google that it's a pain to take photos with traditional clamshell Chromebooks, product manager Naveen Viswanatha said. Now that the devices can fold into a tablet, putting a camera in that position allows students to easily take pictures when the devices are folded into tablet mode while looking through the display.

The redesigned Chromebooks are the result of research and feedback from educators, he said, saying they take into account the need for more "versatile devices" and offer the ability to use Android apps.

Google said last year that it would start offering apps from its Google Play store on Chromebooks, but to fully use such applications devices need to be touchscreen, noted Viswanatha. Those apps are set to make their way onto Chromebooks this year, which Viswanatha said would be particularly handy for special education and STEM subjects, as the ability to use a stylus makes some subjects easier - it's tough to draw a diagram in your notes with a keyboard, he said.

The Wacom EMR stylus itself is notable, designed to look like a pencil because Google hopes they're treated like them. They're also designed to be cheap enough for students to lose -- because, as Viswanatha noted, they will - with the "smarts" embedded in the OS rather than the stylus itself.

The Acer Chromebook Spin 11 and Asus Chromebook C213 aren't due to arrive until late spring. The former features an 11.6in touchscreen and Intel Celeron quad-core or dual-core chip with either 4GB or 8GB of RAM and 32GB or 64GB of storage. The wide-angle camera above the keyboard is 5MP and 1MP above the display. The display itself is protected by Gorilla Glass 3, while the hinge offers a full 360-degree swivel for a variety of modes. Few details were immediately available for the Asus model; the Dell model will also run an Intel Celeron chip. 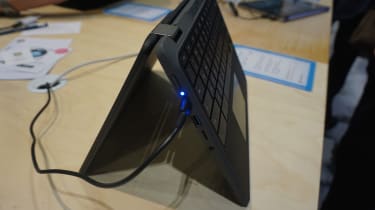 Prices weren't announced for the Acer or Asus model, but Viswanatha noted that they're priced for students, so the cost won't be "outrageous". The Dell Chromebook Convertible 11 will be available from 7 February and will cost $349 versus a non-convertible version for $219. UK prices weren't immediately available.

"This is the future of what we're doing for this year," Viswanatha said, predicting other manufacturers would release similar models later this year as well as tablets running Chrome OS.