Watch out Microsoft, there’s a new laptop/tablet hybrid in town - but what makes Samsung’s Galaxy Book so special? 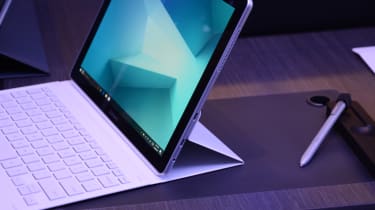 While the traditional PC market continues to implode, analysts are still predicting big things for the sales of 2-in-1 devices like Microsoft's Surface Pro range.After launching the Galaxy TabPro S to a mixed reception last year, Samsung is once again throwing its hat into the ring with a 2-in-1 device aimed squarely at business users.

Running Windows 10, both sizes of Samsung's Galaxy Book 10.6in and 12in are designed with productivity in mind, boasting features that Samsung hopes will entice tech-savvy workers away from Apple and Microsoft. It's sleek, lightweight and powerful, but will Samsung's Galaxy Book make a dent in that Surface-dominated market?

With either black or white paint jobs, both sizes of the Galaxy Book take advantage of Samsung's trademark design expertise. The two devices have similar lines to the company's Galaxy smartphones, and are both extremely thin - the 10in version comes in at 8.9mm, while the 12 version is just 7.4mm thick.

Both models ship with up-to-date Kaby Lake processors. There's a bit of a jump between the two - you'll be far better suited with the i5-powered 12in model - but both seemed wonderfully swift during our brief bout of playtime.

There's an updated S Pen, too, with a more accurate writing experience, facilitating more precise sensitivity. Our initial time spent with it was short and we've never been sold on stylus note-taking, but Samsung latest offering may just have swayed us - we can see the Galaxy Book being the perfect companion for our many press goings-on. Even better, this year's S Pen doesn't need a battery to work. 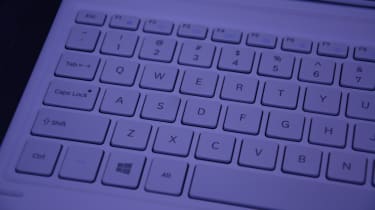 The keyboard cover is an interesting one. Microsoft's Surface cover was always a bit too finicky for our liking - a lacklustre keyboard replacement - as was Apple's Smart Keyboard, but Samsung's own was a delight to use. That touchpad is huge, with plenty of room for multi-touch flourishes. And the keyboard itself? Well, it had a surprising amount of depth given its slim frame, with each key giving a generous amount of feedback with every press.

Experts have been predicting that the 2-in-1 market will take off like a rocket for a while now, and Samsung is clearly banking on this being the case. However, its new Galaxy Book range is going up against the iPad Pro and Surface Pro in the business device market, neither of which have been particularly succesful in denting the popularity of traditional PC form factors.

Whether that holds true remains to be seen. It'll largely boil down to price, something Samsung failed to share with us at MWC. Microsoft's Surface Pro 4 will still cost you around 800, a high price point that's certainly put off a fair chunk of people. If Samsung can undercut this (at least with the 10.6in model), we may see the Galaxy Book being the go-to laptop/tablet hybrid for the next generation, particularly as Samsung's offering is one of the best-looking 2-in-1s we've seen in a while. Until we get official pricing, we'll remain cautiously optimistic.