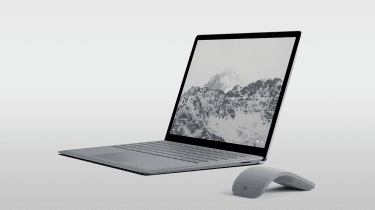 Microsoft has unveiled the latest addition to its line up of first-party devices: the Surface Laptop.

Panay claimed the device is thinner and lighter than the MacBook Air and MacBook Pro, with better performance and longer battery life than any MacBook currently available.

These impressive claims aredriven by Intel's seventh-generation Kaby Lake chips. The Surface Laptops ship with a Core i5 or Core i7 kaby Lake processor, with up to 16GB of RAM.

Redmond's new device has a 13.5in touchscreen using Microsoft's PixelSense technology, and just like its other devices, the company is touting superb colour accuracy. There's no word on the resolution as yet, but it will be compatible with design-focused accesories like the Surface Dial and Surface Pen.

Unfortunately, the Surface Laptop is running a little light on ports. It features a full-size USB Type-A port, but lacks the much more versatile and increasingly common USB-C. It also uses mini DisplayPort, instead of the much more widespread HDMI connector, which could leave a lot of users high and dry in terms of connections.

Design-wise, the new laptop looks like a hybrid between the Surface Pro 4 and Surface Book, featuring a proper clamshell hinge, but a fabric-covered keyboard reminiscent of the Surface Pro 4's TypeCover.

However, there are some notable red flags that may end up putting both consumers and businesses off Microsoft's new notebook. For starters, the Surface Laptop comes pre-installed with Windows 10 S, the company's new education-focused OS. Anyone wishing to use the full-fat version of Windows 10 will be able to upgrade to Windows 10 Pro for a one-time fee.

The stripped-down operating system can only run Windows Store apps, meaning that users will find themselves unable to use many traditional desktop programs. Microsoft claims that this is to ensure that all the apps are secure and Microsoft-verified, but customers may end up frustrated by the lack of flexibility.

Commentators have also remarked on how expensive the new device is. The Surface Laptop starts at $999, which nets customers a Core i5, with a 128GB SSD and just 4GB of RAM. To get the top spec, which includes 16GB of RAM and a Core i7 processor, you'll have to shell out over $2,000.

The Surface Laptop will start shipping out to US customers on 15 June, but there's currently no word on UK availability. Based on the launch timetables of previous devices though, we can predict that it may take up to six months before the new notebook makes it to the UK.