The best of the Swift range, let down by a confusing design 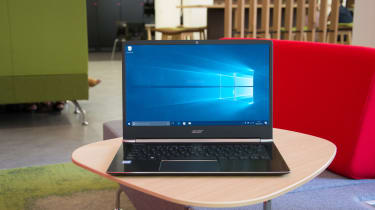 By slimming down the screen bezels a touch, Acer has managed to squeeze a 14in screen into a frame that is only marginally bigger than a typical 13.3in laptop. It's an impressive feat that takes notes from Dell's Infinity Edge design, which should be the standard for laptop panels as far as we're concerned.

Aside from that the screen is a fairly standard 1080p IPS display with a glossy finish, offering some decent viewing angles and a fairly good performance output. In our tests, it reached a maximum brightness of 363 cd/m2, which is what you might expect from a laptop in this price range, making it perfectly suitable for business tasks. It also covers 82% of the colour gamut, which, while not spectacular, is again strong enough to produce colours with decent accuracy. It is certainly a step up from the dreadful screen on the Swift 3.

The Swift 5 is available in two configurations, powered by either a Core i5 or Core i7 processor. The model we reviewed came with an i5-7200U clocked at 2.50GHz, 8GB of RAM and a 256GB SSD. The pricier i7 version comes with a slightly higher clock rate and a 512GB SSD, but is otherwise identical.

Like the Swift 3, the Swift 5 opts for a lower power 'U' processor, which compromises a little performance in favour of prolonging battery life. Therefore, what you should expect is a device with a fairly decent performance output, backed up by a healthy battery life - thankfully the Swift 5 does not disappoint.

In our 4k benchmark tests, the Swift 5 scored a respectable 45, which smashes both the Swift 3 and 7, and is just shy of the Dell XPS 13 (50), which is over 400 more expensive. It provides more than enough muscle for day-to-day tasks, and will support more strenuous activities without grinding to a halt. That 8GB of RAM should also be enough to cope with high amounts of multitasking and multi-tab browsing.# 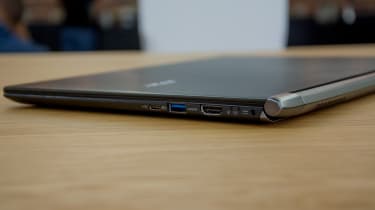 A major criticism of the Swift 7 was the truly woeful battery life, something that should have been stellar given the severe performance sacrifice it takes from its Y series processor. Thankfully, the slight compromise to power on the Swift 5 is paid back exponbentially through its superb battery life. It managed 9 hours and 12 minutes during our video playback tests, which is more than enough to last through a busy working day. As a reference, the Swift 7, which is over 200 more expensive, scored just 29 on our benchmarks, lasting only 7 hours and 6 minutes.

The Acer Swift 5 is one of those rare beasts that perfectly straddles the line between budget and premium. For less than 624 exc VAT, the whole thing screams value for money. You get the performance, portability and battery life you would normally expect from a 1,000+ machine, and the fact that Acer has chosen to squeeze a larger screen into a frame not much bigger than that of a 13.3in laptop makes it really feel like you're getting the most for your cash.

The design will not be for everyone, and it certainly suffers from a lack of the unified, all-metal frame found on the Swift 7 and other machines on the market. However, that is ultimately our only major criticism, and if you're looking for something that's great for work and provides decent portability, you're getting a great business companion in the Swift 5.

The Acer Swift 5 is a great example of an ultrabook that offers the portability and performance of a high-end machine, without the eye-watering price point that comes with it. While the design might not be for everyone's tastes, those looking for a thin and light device that is powerful enough to deal with a busy work schedule, will find the Swift 5 a solid companion.