If you want to upgrade your PC's memory, you need to know what you already have 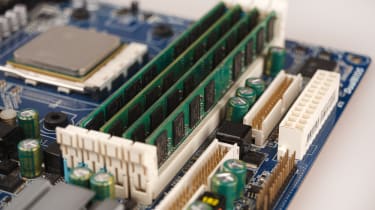 With huge swathes of the population now working remotely, our desktop PCs and laptops have never been under such strain. With that in mind, it's never been more important that we ensure our machines have a decent amount of memory in order to handle this increased demand.

Random Access Memory (RAM) is a crucial component of any computer, and usually comes in the form of removable sticks which slot into the motherboard. There’s a difference between this and storage, but the two often get mixed up – so let’s use a handy analogy to explain the distinction.

It’s often the case that a system’s central processing unit (CPU) is thought of as the brain of a system, and by the same token, storage devices like a hard drive and an SSD are the system’s long-term memory.

If we expand this further, RAM can be best thought of as the system’s short-term memory – the equivalent of the part of the brain that handles everyday tasks, like eating, cooking, breathing, processes that require contextual data but can be quickly forgotten soon after. RAM allows more “headspace” for a system, providing temporary contextual data for computer processes.

The more RAM you have, the more space that can be used for this data, and the more applications and processes can be supported at any given time. Luckily, most modern desktops, and to some degree laptops, allow for RAM upgrades, often rejuvenating an aging system.

How much RAM do I have?

Unfortunately, buying RAM can be a little complicated if you’re not sure what you’re doing. RAM can come in a variety of shapes, speeds, and sizes, and even if a RAM stick physically fits into your machine, chances are it won’t work.

Windows 10 provides very limited information in this regard. In order to see this, you want to open the ‘About’ section of the control panel – this can be done by either typing ‘RAM’ into your Windows 10 search bar, and clicking ‘View RAM info’, or you can get there by accessing the ‘System’ settings and scrolling down to ‘About’.

On the About screen you should see information on device name, processor type and speed, installed RAM, device and product ID, whether it’s running a 32-bit or 64-bit operating system, and some miscellaneous data.

You’ll notice that installed RAM shows two numbers. The first is the total amount of RAM installed on the system, and the second shows ‘usable’ RAM, which indicates how much RAM your apps and processes can utilise at any given time. The latter number is lower as a proportion of installed RAM is always reserved for some critical Windows processes.

Given the way it interacts with the system, it’s most efficient to install RAM in multiples of four. That means your installed RAM should either be 4GB, 8GB, 16GB, and so on. Some older machines may have 2GB of RAM, but given that Windows 10 requires at least 2GB to run efficiently, you’ll normally find that machines come with at least 4GB these days. If you have a number displayed that’s not a multiple of four (for example, 6GB), it’s possible that a RAM stick has failed or is not installed correctly. For example, having an installed RAM of 12GB could indicate that of your four sticks of 4GB of RAM, one has failed.

What RAM should I buy?

Most manufacturers currently recommend at least 4GB for day-to-day computing. Gaming and other graphic intensive operations require quite a bit more. A high-end laptop can have 16GB, or even 32GB. Desktops can go even further – in fact, some 64-bit editions of Windows will accommodate up to 6TB of RAM, although it’s likely you would hit your motherboard’s maximum RAM limit long before hitting this number.

Before we go shopping, we need a bit more information. CPUID’s free CPU-Z utility is a great option for gathering this data. Install it on your computer, run it, then go to the Memory tab.

There’s a lot of details in this tab that we don’t need to know for our purposes. The main things to note are:

Now you have all of this information, you can start searching for RAM. We’d always recommend getting it new, unless it has a cast-iron guarantee, as RAM chips are pretty fragile. Simply touching them at the wrong moment can fry them, and their golden connector pins can be easily damaged with repeated installs.

Although it’s advisable (especially for inexperienced buyers), you don’t necessarily need to stick to the specifications of the RAM already installed on the system. It’s worth taking a look at any documentation you have to support your motherboard, as it’s often the case that the motherboard can support a variety of RAM frequencies and you may find what’s installed is the lowest end of this range.

To get the full benefit of new RAM, all motherboard slots should have an identical amount of memory, running at the same speed. If you have four slots, you can either populate one slot, two or four – but as always, if you’re using more than one slot, put identical chips in every slot. That means, unless you are 100% sure what you’re doing, don’t be tempted to buy a single stick of RAM to go with the bit that’s already in there. This can actually leave you with a less stable computer than you started with.

It really is worth investing in a matching pair of identical chips – same speed, same RAM, same brand. This is one of those jobs that is worth doing well. We’d also recommend a top brand like Samsung, Crucial or Kingston, bought from a reputable supplier.

Before you do anything, it's important you check that your system allows for RAM expandability. While most modern PCs and laptops will have an extra slot for adding in more memory, some older machines might not. The same is true for unusual form-factors, as in some devices - such as convertible 2-in-1 devices - the RAM is probably glued to the motherboard, in which case, you’re stuck with it.

Many models of MacBook are the same. Recent MacBook Pro and MacBook Air models have the RAM - along with the SSD - soldered to the motherboard, and while some newer iMacs technically offer user-upgradeable RAM, doing so requires extensive teardown of the machine. It's also worth remembering that if you do upgrade the RAM in your Apple machine, it will take specific size and shape, different to what you'd install in a Windows laptop.

When it comes to upgrading, you can - if you really want to - use any RAM chips you have lying around. However, more often than not, while the machine will boot, you may find it’s slower and less stable than before you messed with it.

RAM chips come with different frequencies – in other words, their speed. If you don’t keep a consistent speed, it’s a bit like a Formula 1 car hitting a sudden chicane – the slow chip will cause a tailback of data from the new one and you’ll get even more freezes and crashes. Check the support pages for your machine and look for the fastest frequency RAM your machine will support for best results.

There are a few other things you should look out for when buying RAM. CAS Latency, often listed as CL or CAS, is a measure of latency, which in simple terms means the time the memory has to wait to deliver data to the CPU.  While this won't be too important unless you're building a high-spec PC, it's worth noting that the lower the CAS value, the faster the latency.

Heat spreaders, too, are worth looking our for. While unlikely to offer a major performance boost to your machine, having this feature can help to reduce how hot the memory get which should prolong the life of your RAM.

Remember, RAM is fragile stuff and needs to be handled with the best possible care. That’s why getting it right the first time is so important – retailers are often reticent about taking back RAM, as once it’s been out of the protective bag, it can break if mishandled even slightly.

The good news is, RAM upgrades can bring a sluggish computer back to life, and even make a cheap, low spec computer feel more top-shelf. It’s easy to fit, and you should feel a difference in responsiveness the very next time you turn it on.