Toshiba Portégé X30 review: back with a bang 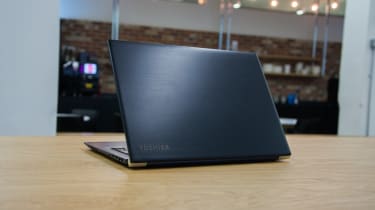 Looks aren't everything though, and the X30 needs to be able to back those good looks up with some muscle if it wants to succeed as a business device. In order to do that, it's packing Intel's latest Kaby Lake chips. Our review model was powered by a Core i5-7200U processor with an 8GB RAM allocation, but as with most of Toshiba's business notebooks, several different configurations are available.

The X30's performance in day-to-day use was good, with no dips in speed or reliability even under intensive multi-tasking use. An overall benchmark score of 49 is very respectable - especially considering it's only fitted with a Core i5 chip - and puts it on par with the Surface Laptop.

Battery life was similarly capable, offering a creditable result of 10hrs 28mins in our tests. We found that it was more than capable of lasting through an entire workday with charge to spare, even while multi-tasking.

Many ultrabooks struggle to walk the line between offering a high number of ports for business users whilst keeping the chassis thin enough to retain the 'wow' factor. Thankfully, the Portg X30 isn't one of them. 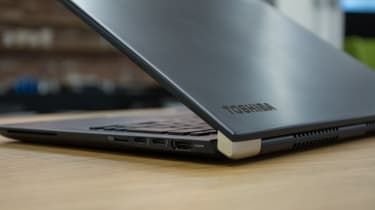 It includes a very healthy complement of ports and connectors, including one USB 3.0 port, a HDMI output, a micro SD slot and two Thunderbolt 3-enabled USB C ports, providing power, display and data transfer. It's even got a security card reader. All in all, it's more than enough to cover the vast majority of enterprise connection needs - and for any extra connectivity you need, Toshiba offers a fulsomely-equipped USB-C docking station.

In terms of extra features, the X30 supports Windows Hello biometric authentication via an IR camera sensor and a fingerprint reader, as well as PXE, vPro, SCCM and WMI support.

The Portg X30 is an excellent business ultrabook, and a true return to form for Toshiba. Not content to sit back and let Apple and others encroach on its turf unchallenged, the Japanese company is coming back to retake its position with all guns blazing.

The X30 may not be the very fastest or longest-lasting laptop, but it's more than capable of keeping up with others in its category and price bracket. What's more, it twins this with a sleek and attractive chassis, packed with a generous allocation of ports whilst still being slim and light enough to qualify as an ultraportable.

Toshiba has succeeded in producing an exceptional business device, and one that we're sad to see leave our review pile. It may be a little expensive, but it's worthy of gracing the desks of even the most discerning techies, from developers all the way to the CIO.

The Toshiba Portégé X30 is a phenomenal business ultrabook, dripping with features that make it much better-suited to an enterprise environment than other high-end laptops. It's not the top of the tree in terms of power, but it's close, and it can't be beaten for versatility.