This 15in convertible is a flipping powerhouse 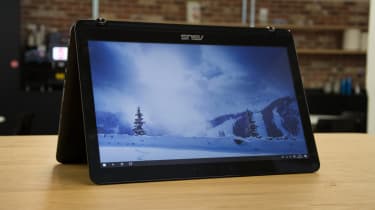 There's a reason why this laptop is such a beefy behemoth, and that's because there's an absolute heap of high-tech hardware crammed into it. In addition an Intel Kaby Lake Core i7-7500U chip and 12GB of DDR4 RAM, it's also got an Nvidia GeForce 940mx discrete GPU.

A dedicated graphics chip is a rare sight on non-gaming laptops, and its inclusion means that the ZenBook Flip can chew through demanding photo and video editing tasks with much more speed than a laptop that's reliant on its CPU's inbuilt graphics processor.

The rest of the hardware is certainly pulling its weight, too. With an overall benchmark result of 60, it's pulling ahead of high-end consumer and even-business-grade laptops like the HP Spectre x360 and Elitebook x360. Although it can't touch workstation-grade monsters like the Dell XPS 15 for performance, it's certainly not slacking, and will happily power you through all but the most intensive of workloads. 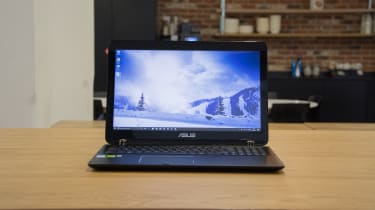 The ZenBook Flip's battery life isn't as stellar as other laptops we've tested, but considering that it's got a hungry processor and GPU to feed, in addition to an almost 16in touchscreen, a score of 6hrs 7mins in our battery tests isn't especially disappointing.

One thing that is disappointing, however (not to mention mildly perplexing), is that the USB-C port doesn't appear to charge the laptop. It provides all the other features of the USB 3.1 standard, including data and display transfer, but doesn't offer any power transfer - which is slightly irritating.

This minor niggle aside, the ports on this notebook are fantastic. They're another reason why we're inclined to forgive the ZenBook Flip for its somewhat chunky stature, as it's fitted with virtually all the ports you'll ever need. Alongside the aforementioned USB-C port, there's also three USB 3.0 ports, a HDMI output and an SD card reader.

There are a few nifty extra features, too. It's compatible with Asus' SonicMaster laptop subwoofer technology, for deeper, richer sound, and it also includes an infrared camera. This means you get Windows Hello support for login via facial recognition, which is just and smooth and satisfying as ever. 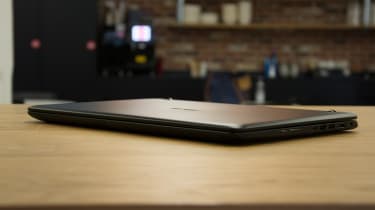 One feature that's not so welcome, however, is the amount of bloatware Asus still loads onto its laptops. McAfee security software comes preinstalled, along with several Windows Store games and a 'gift box' of free software offers from various partners - we'd recommend uninstalling all of the above as soon as possible, as it's more of an irritating distraction than a genuine benefit.

The Asus ZenBook Flip UX560U is a charming little oddity. It's rare to see a convertible of this size, much less one that also has a dedicated GPU. If you've been hankering for a notebook that marries the performance and functionality of a workstation-style desktop replacement with the versatility of a hybrid device, this laptop will scratch that itch.

It's not perfect, though. The build quality leaves something to be desired in places, and the screen is a little disappointing. There's also the problem of Asus' compulsion to fill their devices with all manner of unnecessary software, which is growing increasingly tiresome.

On the other hand, it's easy to forgive these scant flaws when you consider the price. At just over 1,000 before VAT, it significantly undercuts the few other 15in convertibles on the market, and it's even cheaper than a lot of 15in clamshells - all while keeping pace with some of the biggest names around. If you've got your heart set on a 15in hybrid but don't want to break the bank, you could do a lot worse than this monster machine.