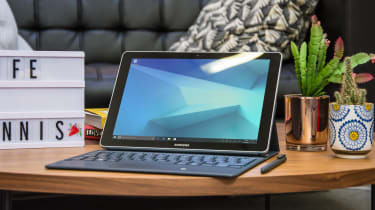 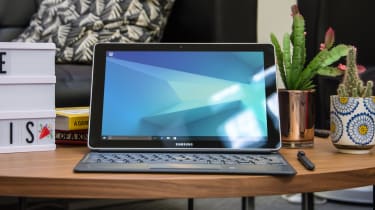 True to form, Samsung doesn't disappoint when it comes to the screen. Of course, it can't quite match the performance of the Galaxy S8's QHD OLED screen, but it's certainly impressive for a 1,920 x 1,260 LCD display.

It does particularly well with colour reproduction, covering 92% of the sRGB gamut, which is just shy of the coverage levels of the Surface Pro and iPad Pro. It also has a maximum brightness of 387cd/m2 and a 928:1 contrast ratio, both of which are significantly higher than the Switch 5's 341cd/m2 and 845:1 respective scores.

While not the most impressive screen around, it does its job well, and offers decent viewing angles and a brightness that is good enough for outdoor use. 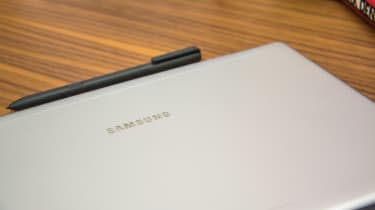 While 1.0GHz doesn't sound like a lot, it's perfectly suitable for daily tasks, such as web browsing and word processing, and Windows 10 feels smooth and responsive. It's also capable of boosting itself to 2.6GHz during intense periods, such as opening a bunch of webpages or programs.

In our benchmark tests it achieved an overall score of 25, which puts it on par with the Surface Pro's m3 variant, but vastly behind the powerhouse 10.5in iPad Pro. In reality, that means it's going to be perfectly suitable for web browsing and light work tasks such as word processing, but will buckle if you try to multitask too many programs at once. However, that modest spec and fanless design does mean it's whisper-quiet as a result.

The main issue is the battery life. It managed just 7hrs and 18mins in our benchmarks, which should be enough to get you through a working day, but is disappointing given the weak output of the CPU. That's significantly behind the iPad Pro 10.5in's score of 12hrs 59mins, but more than the slightly cheaper Acer Switch 5, which got a result of 5hrs 51mins. 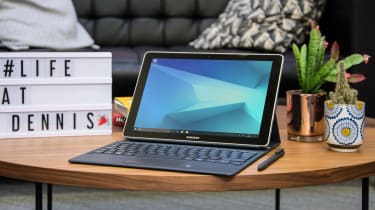 The Galaxy Book is aimed squarely at those customers who want a Windows 2-in-1 experience at a price that's a little easier to stomach than the Surface Pro range. It's main selling point is the inclusion of a keyboard and stylus for 649, a full 150 less than the price of the lowest-end Surface Pro, even without accessories.

In that respect, the 10.6in Galaxy Book offers a complete Windows 2-in-1 package. The issue is that quality suffers as a result. With a plastic frame and a keyboard that is near-unusable for fast typists, it's not quite the steal it first appears.

If you're fixed on Windows 10, there are some better value for money alternatives. For 100 more you can get Acer's Switch 5, which offers a higher-quality tablet, keyboard and stylus package, only with a far superior processor and liquid cooling. If you're open to different operating systems and want something with a little more power, the iPad Pro 10.5in blows the Galaxy Book out of the water for the same price. There are simply more compelling alternatives on the market.

An affordable Windows 10 2-in-1 that offers decent screen performance for the price. However, it's held back a inadequate keyboard that makes it difficult to use as a workplace detachable device. More compelling machines are available on the market, at a similarly affordable price point.