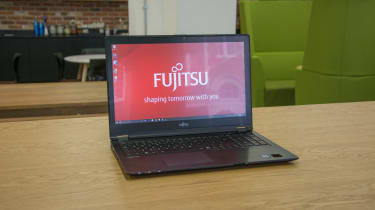 Fujitsu has a history of producing business-grade devices for enterprise users, but more and more companies have begun issuing their workers with consumer-oriented laptops like the Apple MacBook, taking advantage of the boom in attractive, powerful and affordable notebooks. So can Fujitsu's enterprise pedigree propel it to victory over the upstarts, or has the sun officially set on the company as a laptop manufacturer?

We had some issues with the construction of the U757's stablemate, the Fujitsu Lifebook U937, but thankfully Fujitsu has improved the build quality substantially for this model. Gone is the flimsy, plastic-feeling chassis, replaced with a body that feels much more high-quality.

The U757 is solidly-constructed, and the lid and keyboard surround actually feel like aluminium, unlike the U937. It's a chunky beast, with a starting weight of 1.7kg and a thickness of just under 20mm, but it feels comfortably substantial, rather than unwieldy.

It's nowhere near as portable as the 15in MacBook Pro, and you'll want to have it on a desk rather than in your bag most of the time, but if you do need to take it out of the office, you're not going to need a forklift. 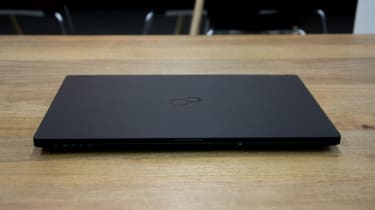 Interestingly, while parts of it are constructed from aluminium, it doesn't use an aluminium unibody design - the chassis itself is plastic, with an aluminium overlay over the top of it. This doesn't feel quite as sturdy as an all-metal design would (although it's far from the worrying flimsiness of the U937) but the benefit of using a plastic design is that the U757 can be much more versatile.

The underside of the laptop features numerous panels and hatches, allowing users (or more likely IT support staff) to actually access its internal hardware for the process of upgrades and repairs.

This is an oft-overlooked feature of business IT devices - MacBooks are all very well, but if your IT staff don't have the specific, specialised tools needed to actually get into the devices, every hardware fault can result in a time-consuming and costly trip back to the manufacturer. Having an accessible chassis prevents this from becoming a problem.

Unfortunately, the display is less successful. Although the 15.6in Full HD panel offers heaps of space for whatever you're doing, the maximum brightness of just 261cd/m2 was rather dim, and made it a little difficult to use even in a brightly-lit office. It's also lacking the matte screen coating often used by business-grade laptops, so glare may well be a problem when using it outside.

The colour accuracy was also a little disappointing, with an sRGB coverage rating of 84% - quite a bit below rival devices, which frequently manage coverage ratings of 90% and above. It shows, too. Colours appear muted and dull - although it's unlikely to adversely impact most business tasks, it's not really suitable for any graphics work.

The keyboard was another area where we felt that the U937 let us down, but thankfully, this has been greatly improved with the U757. The keys have greater travel distance and a firmer, more satisfying feedback, resulting in a much better overall typing experience. The U757 also features a full numpad, which is a nice addition - although, like most tenkey laptop keyboards, it does have a tendency to feel ever-so-slightly cramped. 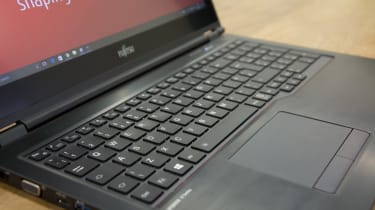 The trackpad, on the other hand, is still a disappointment - we wish Fujitsu would adopt the same all-in-one integrated trackpad design that other manufacturers use. Instead, Fujitsu's Lifebooks use separate, physical mouse buttons, which means you have to move your finger off the trackpad every time you want to click on something, rather than simply pressing down.

It's a black mark that makes an otherwise relatively capable and sophisticated machine feel significantly behind the times.