Samsung's best hybrid yet, but still lagging behind the best of the bunch 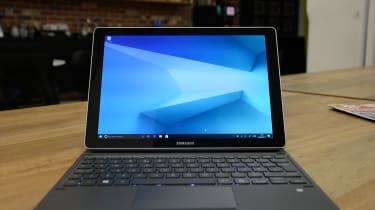 The 12in Galaxy Book offers a stunning screen, with an even better performance than its sibling. That larger panel affords a higher resolution at 2160 x 1440, which gives the screen a much sharper look, and colour accuracy is once again superb, covering a staggering 99% of the sRGB gamut, one of the highest we've tested on a tablet.

While not the brightest screen around, at 376cd/m2 you're still getting a device that will perform well outdoors in all but the harshest of sunlight. Samsung knows how to build a quality display, and anything you run on this thing will look great.

The 12in model comes with a 7th generation Intel Core i5-7200 processor, clocked at 2.5GHz and capable of turbo boosting to 3.1GHz. There are two versions available, one with 128GB of SSD storage and 4GB of RAM, and another with 256GB and 8GB of RAM.

We reviewed the latter of these, which produced an overall score of 47 from our demanding benchmark tests. That's a comparable performance to the similarly specced model of the Surface Pro 4, or the Acer Switch 5. That means it will be able to easily handle most day-to-day work tasks, such as heavy internet browsing, word processing, or app multitasking - particularly with the model sporting 8GB of RAM. What won't come as a surprise is that this isn't built to be a powerhouse machine, so don't expect it to handle heavier duties like large video editing projects. 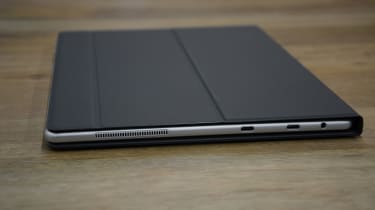 It also compares to the Surface Pro 4 when it comes to battery life. It managed to last 8 hours and 10 minutes in our video playback tests, which is almost a full hour more than the 10.6in Galaxy Book, and is perfectly capable of handling a full day's work. The issue is that its rivals, particularly the new generations of Surface Pro and iPad Pro, are pushing 11 or 12 hours of battery life.

The 12in Galaxy Book is by far the best in the range. It offers a solid 2-in-1 Windows 10-based experience, truly excellent screen performance, and an all-day battery life, with the power to meet most daily work needs. It's an impressive device, and comparable to Microsoft's excellent Surface Pro 4.

However, therein lies the Galaxy Book's main problem - although the Galaxy Book is cheaper than the new Surface Pro, it feels like it's a generation behind. You get comparable performance, battery life, and out of the box experience to the Surface Pro 4, only Microsoft's tablet is 200 less and comes with a far superior keyboard.

At 1,269, it's 20 more than a similarly priced, latest generation Surface Pro, and even with a keyboard bundled in, it's difficult to recommend Samsung over Microsoft - you simply don't get the same premium quality. Alternatively, if you're in need of something with decent power and battery life, there's cheaper alternatives available, including the iPad Pro.

Although it fixes most of the issues of its 10.6in sibling, the 12in Galaxy Book markets itself too closely against the Surface Pro, which only serves to highlight its limitations. While the best of Galaxy Book range by far, performance and build quality place it a generation behind its rivals.