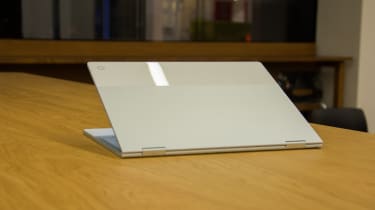 Chromebooks have a reputation as being cheap and cheerful - inexpensive, plasticky things that make up for the fact that they're hobbled in terms of power and flexibility by being highly affordable. But the Google Pixelbook threatens to shatter this reputation once and for all.

There's no denying that the Google PixelBook is an incredibly snazzy-looking machine. Its matte-finished anodised aluminium chassis is razor-thin, with a sterile, almost antiseptic design that wouldn't look out of place on board some kind of utopian science fiction starship.

This is complemented by a white glass panel inlaid into the lid, with the touchpad and rubber wrist-rests creating a corresponding white strip on the base, and a similar rubber strip on the underside. This creates a unique, distinctive look that sets it apart from every other notebook and ties in with the aesthetics of Google's Pixel phones, but there's practical reasons behind it, too. 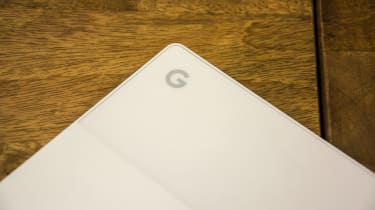 The rubber on the underside gives it improved traction so it won't slip on the desk, while the wrist-rests perform the same function when the laptop is flipped over into tablet mode. The glass panel on the lid even helps to improve wireless connectivity, as with the Pixel range. Speaking of which, the hinge itself is lovely, with a smooth action but enough stability to firmly stand up without too much wobbling.

However, we do have a couple of concerns about the design. First of all, although the white rubber wrist-rests look lovely when you first take the Pixelbook out of the box, we're concerned about how clean it's likely to stay. White rubber in particular has a tendency to discolour with age, as well as being more susceptible to picking up stains, scratches and other blemishes.

There's also the fact that the glass panel is more vulnerable to cracking than a standard aluminium shell. It's made from Gorilla Glass, so it shouldn't be too much of an issue if you're careful with it, but it's still at greater risk than a metal unibody would be.

These are minor niggles, though; overall, the Pixelbook is an absolutely gorgeous machine. At 10.3mm thin, it's a sliver of a thing, and the the 1.1kg weight means it's eminently portable - perfect for slinging in a bag and taking to meetings.

This compactness also applies to the display. The screen measures 12.3in across the diagonal, which is comparatively petite for a laptop; they tend to start at around 13in. It's closer in size to hybrid tablets like the iPad Pro or Surface Pro, and it shares the latter's 3:2 aspect ratio. As a result, there isn't quite enough screen real-estate to effectively use multiple on-screen windows at the same time, despite the fact that window snapping is an option. 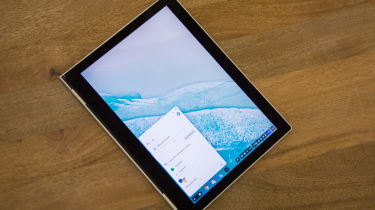 On the other hand, this smaller size works in its favour when you need to use it as a tablet. While larger hybrids can often feel unwieldy,the Pixelbook is very comfortable to use clipboard-style for reading, sketching or making notes. Similarly, the large bezels - which we'd usually mark a premium laptop down for - are (with the exception of the enormous bottom bezel) necessary for allowing you to hold it as a tablet without accidentally pressing stuff on-screen. It's a touch too heavy to use as a handheld tablet for extended periods, but then we've yet to see a convertible that isn't.

The screen's quality is excellent, too. The 2400 x 1600 Quad HD panel is sharp and detailed, with excellent contrast and a very good maximum brightness of 462cd/m2. Colour accuracy is generally good, and the Pixelbook covered just under 95% of the sRGB colour space. The only hiccup is a problem with blues and purples tending to be oversaturated, but it's not especially noticeable in everyday use.

If the Pixelbook has one crowning glory, it's the keyboard. Like the Surface Pro and MacBook Pro, Google has opted to give the Pixelbook a keyboard with minimal travel distance - less than 1mm, in fact - and sharp, responsive feedback. Typing is easy and fluid, and each keystroke feels deliberate and precise.

The keys are ever-so-slightly textured, and feel lovely to use. It's full of neat little touches, too, such as backlighting that only activates in dim conditions and function keys for opening the app drawer and invoking the Google Assistant. 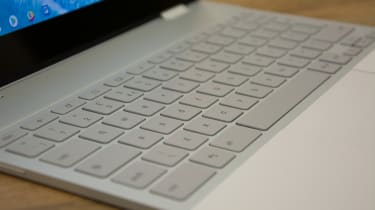 The trackpad is similarly excellent - a smooth white glass slab, with superb sensitivity and firm, satisfying feedback from clicks. As mentioned above, it's flanked by two white rubber wrist-rests which, despite our concerns about their long-term cleanliness, provide a much more comfortable surface when typing than the traditional aluminium chassis. It's a lovely setup, and equal to the top-class examples offered by the likes of Microsoft.