Talking about a Chromebook's hardware is always a slightly tricky prospect. They generally tend to use lower-powered processors like Intel's Celeron or Pentium chips, but they also have much, much lower requirements than Windows laptops due to the lightweight nature of ChromeOS and the fact that web apps don't rely on local processing power. This means they can generally get by on a lot less, but performance compared to Windows machines is still commonly an issue.

Google has addressed this by fitting the Pixelbook with more powerful Intel processors. There's a Core i5 version with 8GB of RAM, available with a 128GB or 256GB SSD, and a forthcoming Core i7 version with 16GB of RAM and a 512GB NVMe SSD. The i5 version that we tested uses one of Intel's seventh-generation Y-series processors - lower-powered dual-core CPUs designed for thin, fanless machines.

This can often result in slower performance than laptops that use 'fully-fledged' chips, but the Core i5-7Y57 chip used in the Pixelbook is clocked at a blazing 3.3GHz, which is considerably faster than most other laptops, let alone Chromebooks.

As a result, it was able to capably hold its own in our benchmarks, with comparable scores to HP's excellent EliteBook X360 and the Microsoft Surface Laptop. This notebook more than any other blows apart the myth that Chromebooks are universally underpowered. Laptop snobs may be surprised to hear this, but when it comes to performance, the Pixelbook is every bit the equal of high-end Windows laptops.

The only caveat here is that we experienced a couple of unexpected crashes and freezes while using the Pixelbook. Luckily, it boots so fast that we were up and running again within seconds.

Performance is nothing without longevity though, and battery life is a key concern for ultraportables like the Pixelbook. Thankfully, this is another area in which the Pixelbook acquits itself admirably.

We measured a battery life of 8hrs 25mins in our benchmark tests, which is certainly respectable. It's lagging behind the Surface Pro by more than three hours and it's not quite hitting the 10-hour mark than many premium ultrabooks are capable of achieving, but it's enough to see you through a working day.

Even if you do find yourself running out of charge unexpectedly, Google has you covered. The Pixelbook offers fast-charging via the included USB-C charger - with 'fast' being the operative word. From empty, the Pixelbook took just over an hour to fully charge. An hour! That's an absolutely astonishing rate that we've yet to see any other device match.

Tiresomely though, issues crop up yet again here. The fanless design means that if you put the Pixelbook under extreme load, the area directly above the keyboard can get extremely hot. We registered a blistering maximum temperature of 48 degrees celsius, which is slightly concerning - although we should point out that while it often felt warm to the touch, it wasn't usually running at this extreme temperature.

Many people - particularly techies and IT professionals - tend to turn their noses up at Chromebooks on the basis that they're severely lacking in functionality versus their Windows counterparts. At the root of this prejudice is the belief that Chromebooks need a constant internet connection to be able to do anything, but that's simply no longer true.

If you're using G-Suite apps like Google Docs or Sheets, you can also do all your normal work while offline, just as you would while connected. Documents stored in your Google Drive are accessible offline, and you can open up the relevant app and start working on something even without a connection. Any changes you make will be saved locally and then applied to the version stored on Google's servers once you're reconnected. 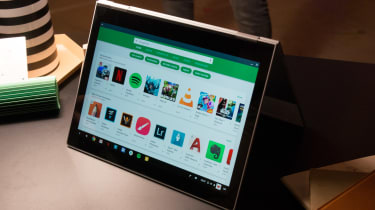 Unfortunately, Chrome OS is still hamstrung by certain limitations. Performing basic tasks is fine, but if you try and treat it like a normal laptop, you'll find yourself bumping up against a myriad of minor frustrations, like the fact that local file management is still a monumental headache compared to Windows or MacOS.

Another one of ChromeOS's drawbacks has historically been the fact that it's largely limited to web apps, but the Pixelbook goes a long way towards fixing this by giving users access to the Google Play Store's robust catalogue of Android apps. This removes a huge amount of the limitations of Google's desktop OS, but again, it's not without compromise.

First and foremost is the fact that you just won't be able to run some software, such as niche business applications or proper media editing tools. Yes, you can run app-based versions of tools like Adobe Lightroom, but you're just not going to get the same experience as the fully-fledged desktop versions.

As with Samsung DeX, many apps have been optimised to run on larger screens as well as smartphones, but most are just standard phone apps that expand to fill the screen. These can be expanded, but this just results in the default user interface being uncomfortably stretched out to cover a larger aspect ratio, which makes most apps look absolutely horrible. 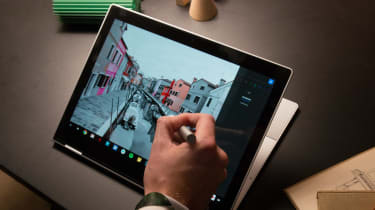 Running apps as smartphone-sized windows isn't particularly onerous, however. In fact, we found that tiling multiple Android apps on an external monitor was a better way to keep an eye on things like Twitter feeds, calendar schedules and email inboxes than having them open in separate browser tabs.

Scaling issues aside, the addition of Android apps removes the last major issue that Chromebooks had. If there's anything that you absolutely need the Pixelbook to be able to do offline, aside from a few exceptions you'll be able to find an app to accomplish that task.