The Vosto 14 is meant to be a work companion, does it live up to this claim? 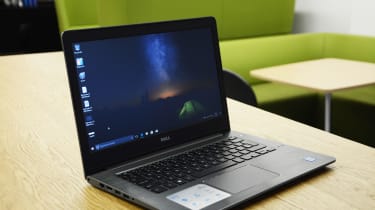 Dell's XPS 13 impressed us immensely and was a great way of showing the company's ingenuity, creativity and hard work. It is arguably one of the best alternatives to the MacBook on the market and a perfect work companion.

Sadly, the Dell Vostro 14 is a far cry from the XPS 13; so far that it pales in comparison, but that makes some sense considering the XPS 13 costs nearly double what you'll pay for the Vostro.

Dell's Vostro 14 5468 is a device produced for small businesses and prides itself on its lightweight design. If all you're going to be doing is work tasks, such as editing files or sending emails without any video or image editing, then this may be the laptop for you, especially at its price.

The Vostro 14 has a simple design, generic and rectangular with the Dell logo engraved on the lid. The device also feels a little stocky and thick measuring 18.5mm and weighing 1.59kg. It still fits in your bag but you will notice it's there, compared to having a 1.29kg, 13.3in Macbook Pro. 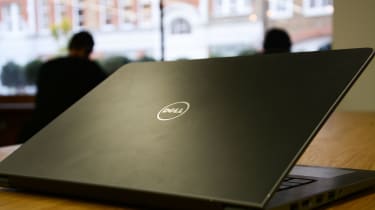 It's similar in size to the Acer Swift 3 which measures 18mm and is only 65g lighter, weighing 1.5kg. However, the Swift 3 is 154 cheaper, has an all-metal aluminum chassis and a 180-degree hinge. With this in mind, the Vostro seems a bit rigid and heavy.

This is emphasised even more when you compare it to the Asus Zenbook UX305CA, which is 55 more expensive than the Vostro 14 but only weighs 1.2kg and has a thickness of 12.3mm.

Furthermore, when opening the Vostro 14's lid, the device can feel a little stiff and awkward. You generally need two hands in order to pry the lid off the base so make sure you practice before heading into a meeting. The LCD cover and the palm rest are made of aluminum and the rest of the laptop is made out of plastic, making it feel cheap in places. Unfortunately, because of material the lid is made out of, it also collects fingerprint marks which will make it look grubby over time. The screen is surrounded by a fairly thick bezel too, adding to its stocky appearance.

The device has a 14in 1080p screen which offers plenty of room if you're only going to be using this laptop for work. It has a resolution of 1366x768, so you won't be spending a lot of time admiring images or watching videos on this screen.

In addition to this, the display mutes colours, makes photos look flat and lifeless and has weak contrast. This also applies to videos - the colour is sucked out of the picture and it looks somewhat grainy. When videos are played on the Vostro 14 the people in them tend to lose the colour in their cheeks. 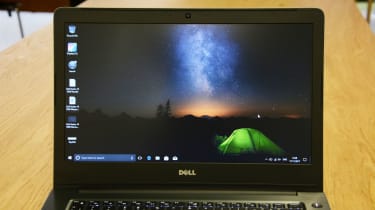 The reason for this emerged during our display benchmarking. It has a colour coverage of 58%, much lower than the average of 80-85% that we'd expect to see.The actual colour accuracy is nowhere near what we would expect it to be for this kind of device either.

We played a YouTube video on our Macbook Pro and on the Vostro 14 in order to compare the two. On the Vostro 14, it was easy to see how the colours were muted and weak. If you're looking for a device you can also relax with in your downtime, then it's probably best to look elsewhere.

Moving on, the Vostro 14 does have an anti-glare display, which is useful if you're working in the sunlight when you're out and about. However, the maximum brightness for the device measured 214cd/m2 which was also nowhere near the average of 350cd/m2.

It's almost as if the anti-glare was included to make up for the low brightness, since if it wasn't present, you wouldn't be able to see anything on the screen unless you're in a dark office. To give you an idea of how low the score was, the Asus Zenbook UX305CA achieved a brightness of 409 cd/m2 through our own benchmarking tests, just under double what the Vostro 14 managed.

Additionally, the viewing angles aren't amazing. When looked on from the side part of the colour on the screen dims alarmingly meaning that you need to sit full on in order to get the most out of your experience. You need to have this in mind if you are trying to show multiple colleagues something on your device in order for it to not impact your work.

The keyboard is comfortable and easy to use as it leaves plenty of space between each key, meaning you're hands aren't cramped when typing. The keys themselves respond firmly with good feedback and there is plenty of room for your hands to rest on the device. Furthermore, the keyboard is backlit, which can be turned on or off, depending on your personal preference. 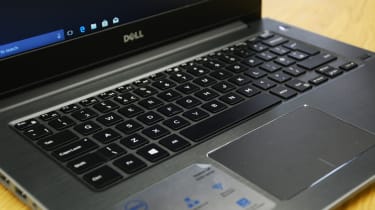 The trackpad is large and comfortable too, our only disappointment was that the left and right mouse clicks felt weak and plasticky when used; we would have liked this to provide stronger feedback like the Macbook Pro's.