Redesigned ultrabook launches ahead of CES 2018 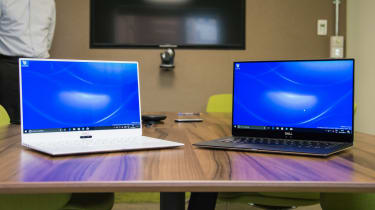 Dell has unveiled its all-new XPS 13, the latest in its line of premium business ultrabooks.

Debuting ahead of this month's CES technology expo in Las Vegas, the new laptop features Intel's latest processors, with Dell claiming improved battery life and performance up to twice as fast as the previous generation.

"This means the XPS 13 has sustained high performance while competitors' performance declines with continued use, making the XPS 13 the most powerful 13-inch in its class".

The XPS 13 has received its first significant redesign since the range was launched in 2015 - it's now 3.4mm thinner and even lighter than the previous generation, with the already razor-thin screen bezels having been shaved down even further.

The downside of this new design is that, in order to squeeze the XPS down to this compact size, Dell has had to lose the device's full-sized USB Type-A ports. It's not wanting for connections - it includes two Thunderbolt 3-compatible USB C ports, a USB 3.1 port and a microSD card reader - but if you want to plug in a USB drive or other accessory, you'll need an adaptor.

The XPS 13 is unsurprisingly impressive in the specs department, and is fitted with an 8th-generation Intel processor (with vPro options available) and up to 16GB of RAM. It's available with a 1080p or 4K display, both of which are matte-coated to reduce glare, and Dell is claiming a battery life of 19 hours and 11 hours for the two versions respectively.

The new laptop launches today, with a starting retail price of 1,269 inc. VAT. Dell is also launching a new variant with a rose gold and white colour scheme, which will be available in February, starting from 1,669.