Microsoft Surface Book 2 review: Undone by its own ambition 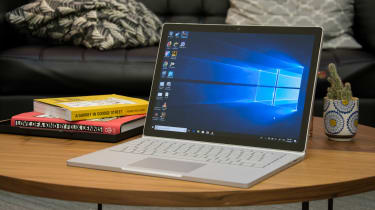 When the Surface Book first launched, Microsoft's debut notebook thoroughly impressed us with a combination of powerful performance, a killer screen and a unique, eye-catching hybrid design. The company has now brought out a follow-up device - the Surface Book 2 - and is hoping to impress us all over again.

Boasting even more internal horsepower and an improved screen, can the Surface Book 2 live up to the standard set by its predecessor?

As Microsoft's first stab at a 'proper' laptop, there was a lot riding on the Surface Book's design. At the time, we were fans, praising the unusual segmented-hinge design and matte-silver magnesium chassis. This time around, little has changed in terms of the Surface Book 2's visual appearance; it's the same hinge design and same appearance, and it's as visually striking as ever.

However, after spending an extended period with the original Surface Book, we've developed some bugbears with it, and it's clear that they're still present with the Surface Book 2.

Firstly, the hinge doesn't open quite as far as we'd like. We identified this as a small issue with the first version, and it's still a persistent (albeit minor) annoyance. There's also the gap between the hinge and screen, which often leads to small items finding their way inside the machine when it's in a bag.

Another issue is that it's actually decidedly chunky when compared with modern ultrabooks. It measures a whopping 23mm at its thickest point, and while that's largely due to that fancy hinge mechanism, the fact remains that it's almost a full 1cm thicker than the most recent MacBook Pro. In fact, it's even bigger than Dell's monster Precision 5520 workstation (if only by 1mm). Combined with the not-insubstantial starting weight of 1.5kg, the Surface Book 2 is not a dainty device. 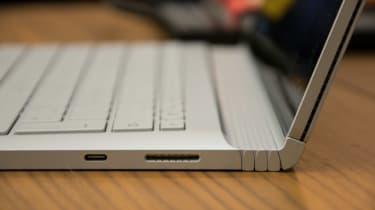 Of course, that's not the whole story - the Surface Book 2 is a convertible, allowing you to detach the screen and tote it around as a tablet. Not that it's much less unwieldy in this form, as the 13.5in screen is too big to be comfortably used like a standard tablet and it still weighs over 700g even without the keyboard.

In reality, the Surface Book 2 is best suited to a workstation-type role. While some artists and creatives might find the ability to remove the screen useful for stylus work with the Surface Pen, this laptop will likely spend most of its life sitting on your desk with occasional trips out of the office.

One of the reasons that the Surface range is so well-suited to graphic designers and the like is that Microsoft's displays are absolutely superb. The company's first-party devices have truly outstanding displays, and the latest iteration does not disappoint. The 13.5in 3,000 x 2,000 panel is unbelievably sharp, and colour accuracy is very nearly perfect, with 96.6% coverage of the sRGB gamut. At 462cd/m2, its brightness is also excellent.

All of this means that everything from watching movies to editing media will be an absolute joy on the Surface Book 2. The screen also uses Microsoft's PixelSense touchscreen technology, and the new Surface Pen supports more than 4,000 levels of pressure sensitivity, as well as tilt functionality for shading. It also supports the Surface Dial, allowing fine-tuned controls for applications like Adobe Photoshop or Illustrator.

As with the previous Surface Book, the second generation's keyboard is a high point. The backlit keys offer plenty of travel depth, and firm resistance and feedback ensures that typing is a smooth and satisfying experience. 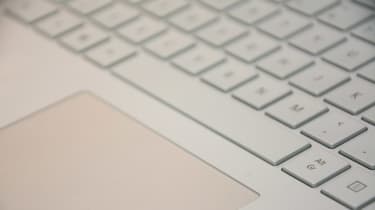 The trackpad is also excellent, balancing strong haptic and auditory feedback with just enough actuation force to ensure that you're never accidentally clicking on things. The glass finish is a breeze to use, and (as you'd expect) Windows 10's gesture controls all work flawlessly.

The Surface Book family is effectively Microsoft's answer to the MacBook Pro, beloved the world over for its processing horsepower. It's only fitting, then, that the Surface Book 2 is very capable indeed. The top-end version, fitted with an 8th-generation Intel Core i7-8650U processor and 16GB of RAM, tore up our benchmarks - in fact, it outpaced pretty much everything that isn't a gaming laptop or a dedicated workstation.

Based on its performance in our workstation benchmarks, we're confident in saying that the Surface Book 2 will be able to handle some of the tasks you'd usually assign to serious enterprise powerhouses. It's not going to match a dedicated workstation from the likes of Scan or Lenovo, but if you need more power than the standard business ultrabook then this beast can deliver.

Storage performance - an oft-overlooked element of laptop manufacturing - is also outstanding, with the PCIe SSD pumping out speeds of 2,162MB/sec for sequential read operations and 927MB/sec for write.

Of course, the inevitable trade-off of more powerful components is that they take a greater toll on the battery life. Sure enough, when we ran the Surface Book 2 through our battery tests, it managed a paltry score of 5hrs 36mins. That's a disappointing result, particularly given the fact that this figure will be lower still if you're planning on putting any strain on the GPU. 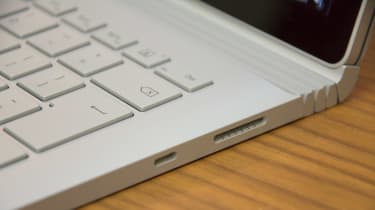 Realistically, you'll probably be lucky to get a full working day out of the Surface Book 2 without charging it up. Luckily, the addition of USB-C means that if you're plugging it into a monitor, the charge will be topped back up automatically. Still, we'd have preferred to see a more robust battery on a device which is ostensibly competing with the excellent MacBook Pro.

Port allocations are an oft-forgotten part of laptop design, but in reality, ports are like toilets - you don't miss them until you need one in a pinch. The Surface Book 2 is slap-bang in the middle of what we'd consider an average complement of ports, with two USB 3.1 Type-A ports, an SD card reader and a USB-C port.

This is a nice even mix, ensuring that users can take advantages of the benefits of USB C, without sacrificing the ability to connect traditional peripherals and USB drives. The only fly in the ointment is that the USB-C connector only supports the USB 3.1 standard, rather than the more versatile Thunderbolt 3.

You can still use it to provide power, video and data over the one connection, but transfer speeds aren't quite as fast as Thunderbolt 3, and you can't use it to connect an external GPU.

If you're in desperate need of a port that isn't included, the Surface Book 2 also supports Microsoft's Surface Dock, which offers a number of extra connection options and attaches via the Surface Connector. Elsewhere, there's support for facial authentication via Windows Hello, as well as the aforementioned Surface Pen and Dial accessories.

As a showcase of Microsoft's technological prowess, the Surface Book 2 is an unqualified marvel. The screen is near-flawless, and is a dream for artists, editors and cinephiles alike. It's a performance powerhouse, putting nearly every other business ultrabook to shame, and even rivalling some enterprise-level workstations. To cap it off, it's a lovely machine to look at, with one of the best laptop keyboards around. 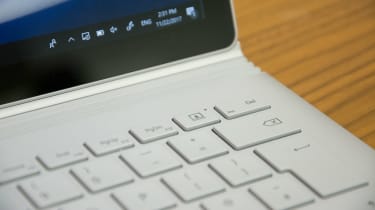 Unfortunately, there's something faintly unsatisfying about the way it all comes together. While many aspects of the second-generation Surface Book, taken in isolation, are excellent, there's evidence of compromise throughout the device. All that hardware, for example, takes a serious toll on the battery life, and having to squeeze in all the screen technology that makes it so attractive for artists comes at the expense of the thin and light design boasted by other machines.

The nail in the coffin, however, is that because it's packing such a high volume of top-flight technology, the Surface Book 2 is extortionately-priced. If you want the most powerful configuration, with the 8th-gen processor, 1TB SSD and 16GB of RAM, be prepared to shell out almost three grand - for that money you could get a fully-specced, Touch Bar-enabled MacBook Pro and still have change left over.

The biggest problem the Surface Book 2 has is that it's attempting to be all things to all people. It wants to be an outstanding tablet for graphic designers, a video editing workhorse for media professionals and a business-class ultrabook for execs on the go. And while it will technically do all of those things, only a slim number of people will need it to. In reality, all of those groups will be better-served by opting for a machine that's more suited to their individual needs.

It comes agonisingly close to greatness, but although the Surface Book 2 is still an amazing laptop by pretty much any metric you care to use, it's undone by its own ambition.

The Surface Book 2 is an excellent laptop than tries to do a bit too much for its own good. While it excels in a number of areas, it's forced to make a couple of disappointing compromises that stop it from achieving its full potential.