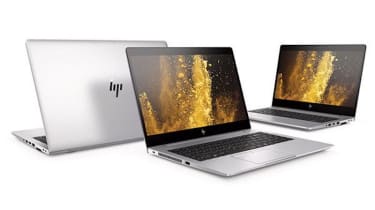 HP has upped its security and collaboration game with the introduction of new features for its HP EliteBook 800 series and HP ZBook 14u/15u mobile workstations.

The HP EliteBook 800 series has been revamped with an all-aluminum chassis, ultrabright IPS display, which adapts the brightness according to changing ambient light and a performance bump thanks to its 8th generation Intel Core processor. The HP EliteBook 830 G5 has a 13in screen in the same profile as its 12in predecessor, while the HP EliteBook 840 G5 sports a 14in screen.

HP's updated ZBook 14u/15u mobile workstations now have the added bonus of HP Sure View to protect the user's private data if anyone's looking over their shoulder. They run on the same 8th generation Intel Core processors as the EliteBook 800 series, with AMD's Radeon Pro graphics for intensive graphics processing power.

Both the HP EliteBook 800 Series and ZBook 14u/15u mobile workstations are designed for video conferencing, with 360-degree voice pickup if multiple people are in the same room as you, or in individual mode if you're the only one in the room on a conference with the outside world.

They also ship with HP Premium Collaboration Keyboard, adding built-in calling keys and include HP PhoneWise, allowing users to text and make calls from the PC from an iOS or Android device.

From a security point of view, HP has updated Sure Start, offering enhanced encryption and event logging and Sure Run, which monitors the key processes of the device and alerts if any changes happen within key applications such as the antivirus software, restarting if it feels it's necessary.

The final addition to HP's security lineup is HP Sure Recover, which offers automated network-based software recovery over an internet connection. If all the data from the computer is wiped, for example, it can be recovered with HP or the business's software image.

"The game has changed and standard issued corporate devices of the past no longer meet the needs of the workforce of the future, particularly among Gen X to Gen Z professionals," said Benoit Bonnafy, vice president of HP's business personal systems in Europe, the Middle East and Africa (EMEA).

"Our latest EliteBook and ZBook offerings set new standards for design, performance, and functionality. Whether it's the world's thinnest devices or the industry's most robust security features, HP is redefining the commercial PC experience for the modern workforce."