Push for standardisation sees IT estate overhaul, but leaves no room for education-focused Windows 10 S 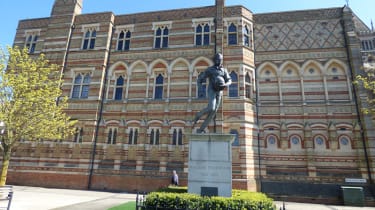 When Andrew Waples, IT director at Rugby School, assessed Microsoft's early Surface devices, he decided they lacked the necessary robustness for everyday use among staff and students, so opted to deploy Dell Latitudes instead.

Fast forward a few years, however, and Waples is in the middle of deploying a range of Surfaces among the public school's 148 staff, even ripping out ageing Apple iMacs to replace them with eight Surface Studios for art and design pupils.

Microsoft's first attempts to build its own range of Surface hardware didn't go too well, as shown by its drastic $900 million write-down under then-CEO Steve Ballmer in 2013.

So what changed? From Waples' standpoint, the answer is 'a lot'.

"From the Surface 4 onwards they'd got it right the battery was right, the robustness, the resolution, so we looked to replace our Windows-based laptop offering to staff to either Surface Books, Surface Pros, Surface Laptops or Surface Studios," he tells IT Pro.

Ditching the Latitudes staff had been using in favour of Surfaces wasn't a cheap option, but Waples says feedback from the staff showed they valued the Surface Pro's stylus and ability to double up as a tablet, as well as a regular laptop.

When the IT team brought in some Surface Laptops for teachers to try out, Waples found that most people missed the Pro's versatility.

"We thought they'd go more conventional [and choose the Laptop] but the users liked the ability to have it on their lap, using their finger and use it in comfort mode with their feet up rather than at a desk in a conventional working environment," he explains.

Photography and lens-based media teacher Amy Farelly found it was useful in lessons as well.

"I used the Surface Pro as my teaching device for admin, creating lectures, that sort of thing. But I was using the tablet part to show students works of art. I could easily pass it around students and they really took to it," she says.

Apple's iMacs get ripped out in favour of standardisation

Although Farelly admits to being a lifelong Mac user, her students weren't and while they were meant to be learning how to use Adobe's Creative Cloud, the Mac's UX got in the way. "We had to start teaching students Apple Mac even though they were just using an application on it," Waples says.

With the three-year-old iMacs due a refresh, Waples showed Farelly the Studio. "Andy convinced me to give it a go and I have to say, I was a long-term Mac user but now I'm converted," she tells IT Pro.

"When you looked at how closely we could zoom in and look at the colours, we could do everything we wanted to do with it mixed media, film-making, animation, illustration and photography we were just blown away."

"[The pupils] really like the touchscreen mode in terms of art they like to use it as a tablet, and when you have the Studio lowered it looks more like a drafting table so it's more comfortable to work on," she adds. "It really has ignited an enthusiasm and passion for the subject again they come early and they want to stay late."

However, while Rugby School has used Windows devices for years, none of them run Windows 10 S, Microsoft's attempt at making an OS for the education sector. Under the school's licensing model, Windows 10 Education Pro, it can set its devices up with 10 S or 10 Pro, and Waples picks Pro every time, running it on 800 desktops around the school.

In fact, 10 S's sole selling point that it's identical to regular Windows 10 except for being restricted to downloading apps from the Microsoft Store is rendered redundant by Microsoft's Access Control. "[With that] we can control exactly what's loaded on and where the machine goes," confirms Waples. "There's no benefit to 10 S in a large domain like ours."

"We deploy school-specific applications that we weren't 100% sure we'd be able to do if the whole of the site [wasn't on Pro]," he says. "We use so many little nuances of programs in say History or Classics little programs that we'd have to completely make sure they work [on 10 S], or use them in a virtual environment."

As a longtime Windows environment with 1,500 users and 7,000 devices to support, for Rugby School moving wholesale from Pro to standardise again on 10 S just wasn't worth the time investment. "It would be a nightmare to move a site the size of this completely across to S it would take me probably a year," Waples states.

That kind of reality for the core market for Windows 10 S might have played a part in Microsoft's decision to replace 10 S with an 'S Mode' from 2019 that Enterprise and Pro users can enable if they wish to.

With all staff due to have their new Surface device this year, Waples is looking ahead to his next priority, moving as many of Rugby School's IT assets into Microsoft's Azure cloud as possible.

"All the students are on Office 365 now so we're halfway there, but on-site specific workflows [may be more difficult]," he explains. "What I've said is I will move anything to cloud as long as it does not affect the user experience on-site."