A committed enterprise 2-in-1, bested by the competition 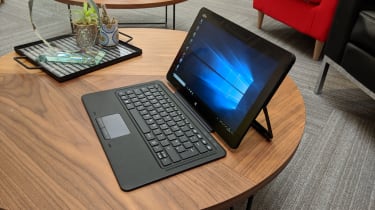 Anyone on the lookout for a detachable Windows 2-in-1 will have no shortage of consumer-grade models to choose from. Business-focused hybrids, on the other hand, are more elusive, with devices like the Stylistic R727 being downright rarities: with a Trusted Platform Module (TPM) chip, Windows 10 Pro and 4G LTE capability, it's the kind of no-nonsense 2-in-1 that could put a smile on any discerning IT manager's face.

What's more, it comes with its own keyboard attachment and stylus pen right there in the box. That would seem to give it an immediate advantage over its arch rival, the Microsoft Surface Pro; however, that particular range rules the enterprise world for good reason, and the Stylistic R727 will need a lot more than free peripherals if it wants to mount a convincing challenge.

It's lucky that this device is an office-dweller, because by consumer standards it's not exactly a slick piece of hardware. At 830g without the keyboard (and nearly 1.2kg with it), it's heavier than the Surface Pro, and dimensions of 201x319x9.5mm mean it's thicker and wider too. The massive bezels don't help in this regard - they serve a purpose in giving room to grip the tablet without accidentally activating the touchscreen, but it's hard not to find them unsightly. 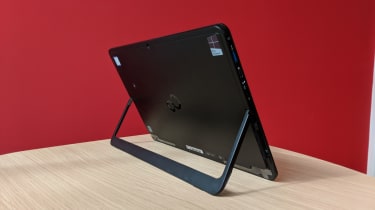 At least the magnesium alloy chassis feels reasonably durable, and the pull-out kickstand deserves credit for being both fully adjustable and sturdier than its thin frame suggests. Our only complaint is that it could have done with something like rubber lining along the edge, to improve grip on a desk.

The range of ports is pretty good: there's no USB-C connector, but the full-size USB 3.0 port is arguably even more useful. A mini DisplayPort handles video output well enough, and a microSD slot can be used to expand on the 256GB of integrated SSD storage. Most interesting of all is the micro SIM slot: you'd need to provide the card yourself, but this can enable 4G LTE connectivity, so the loss of a Wi-Fi signal doesn't have to mean a loss in productivity.

Another key business feature is, of course, Windows 10 Pro. This provides numerous benefits over the Home edition when using the Stylistic R727 in a working IT environment: Bitlocker encryption is great for safeguarding sensitive data, and the Group Policy feature makes it easy for managers to configure devices for multiple users. The Pro edition also includes Windows Update for Business, which allows for far greater control over when potentially disruptive OS updates are applied.

To be sure, it's both convenient and economically agreeable that both the keyboard and stylus are included rather than sold separately. Still, the keyboard suffers a similar ailment to the tablet: it slides about on a smooth desk surface. You also can't set it at an angle, so typing flat is the only option. 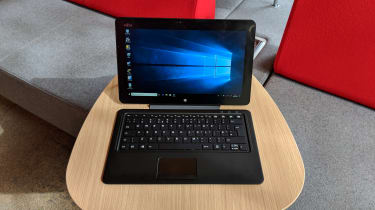 The keys themselves are quite good, though. They're chiclet-style, with more than adequate sizing and spacing, so accurate typing is a breeze.

Conversely, the trackpad feels rather cramped. It's nice for it to be accompanied by two separate, tactile left- and right- mouse buttons, but it often feels like there's hardly any room for broad finger swipes or multi-touch gestures.

The stylus is fine; it's precise enough and comfortably proportioned. Sadly, this too is compromised by the Stylistic R727 offering absolutely nowhere to store it: not a magnetic clip on the tablet, nor a fabric loop on the keyboard.

This is not a 2-in-1 you should be using for serious image- or video-editing work, as our tests showed the 1080p, 12.5in touchscreen display seriously struggled with colours. For instance, it only covers a relatively paltry 62.2% of the sRGB colour gamut, and judging by its average delta E of 4.64, it's nowhere near reaching professional-grade accuracy either. 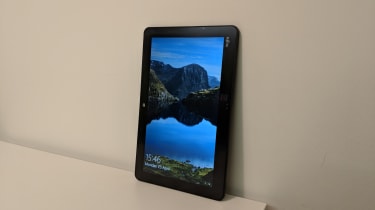 That said, by other metrics the Stylistic R727's screen isn't too bad at all. Contrast is respectable, at 1,053:1, and we measured peak brightness at a high 432.7cd/m2. This luminance, combined with a glass screen that's glossy without being blindingly reflective, means it can be used quite easily under strong lights.

Fujitsu has fitted this 2-in-1 with a dual-core Intel Core i5-7300U processor and 8GB of RAM, the very same core specs you get from the mid-range Surface Pros. As such, it wasn't a surprise when the Stylistic faltered a bit in our heavy multitasking test - scoring 28 - but ultimately managed a very decent 44 overall.

That's plenty of power for everyday office tasks; 2-in-1s often go for Intel's weaker, low-power chip, but the inclusion of a laptop-spec CPU here ensures it's about as responsive as it needs to be for the price.

The processor also has a little bonus for business users: the TPM chip. This helpfully provides a safe place to store passwords and encryption keys, so it works very well with, say, Windows 10 Pro's Bitlocker feature. 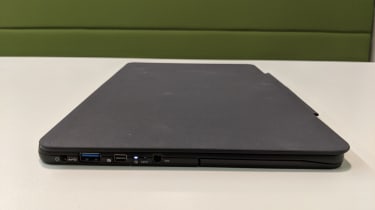 Battery life was a bit of a letdown, sadly. In our video rundown test, the Stylistic R727 fell short of the 7 hours or so that we'd expect from a 2-in-1: in fact, it wasn't even particularly close, running dry after a little over five and a half hours. You could perhaps point towards the CPU's power drain, but we've seen a Core i7-equipped Surface Pro last twice as long in the same test.

Ultimately, that's the biggest problem with the Stylistic R727: it isn't the Surface Pro. The price of Microsoft's hybrid has dropped to the point where you can buy a model with the same CPU, RAM and SSD capacity as this, and still have change left over for a compatible keyboard and trackpad. That's disastrous for the Fujitsu, as it can only really offer 4G LTE in its favour - the Surface Pro, meanwhile, still provides Windows 10 Pro and a TPM chip, while having a far superior display, a generally nicer design, a more comfortable trackpad and much, much longer battery life. The choice, if you can call it that, is yours.

While the Stylistic R727 makes a commendable effort to be business-ready, it’s outclassed in almost every other way by the Microsoft Surface Pro. Low colour accuracy and a battery that won’t even last a full day are just two of the issues it faces.