Fujitsu Lifebook T937 review: A turn for the worse

A clever pivoting display can’t save this expensive, often-frustrating laptop

The Lifebook T937 is a business convertible with a difference: instead of having the touchscreen display rotate backwards, as is usually the case with this style of laptop/tablet hybrid, it instead pivots 180 degrees horizontally and is then folded back down, leaving the touchscreen facing upwards in a tablet configuration.

Although this ends up with the screen's edges not quite lining up with those of the keyboard base, it's a nice idea. With most convertibles, where the screen is pressed up against the laptop's underside in tablet mode, the keyboard is left exposed, which feels a bit strange in the hands at the best of times. With the Lifebook T937, we were much more comfortable grasping the folded laptop in one hand or setting it down on a desk without worrying about smashing any keys underneath.

Sadly, as a day-to-day device, the Lifebook T397 often fails to keep up the standard set by its intuitive hinge design.

Built from a combination of magnesium alloy and plastic, the Lifebook T937 is neither amazingly durable or worryingly fragile. There's a bit of screen flex but no major issues with build quality (we're not counting the dour aesthetic), and in fact it's quite nicely compact. Some relatively slim bezels contribute to this being a narrow laptop by 13.3in standards, and it's not so heavy that we became tired of lugging it around.

Befitting a business convertible, security is a big focus. There's built-in Kensington lock and smart card support, an Opal-compliant 256GB SSD, Bitlocker encryption from Windows 10 Pro and not one but two sensors for biometric logins. The first is a straightforward fingerprint reader, and the second is Fujitsu's own Palm Secure palm vein sensor. Cleverly, the fingerprint reader is positioned just below the screen, so it's always accessible even in a tablet configuration - the one downside of the display covering the keyboard in this setup is that it obscures the palm vein sensor too.

Fujitsu's Palm Secure sensor requires the company's Workplace Protect software in order to function. One user can register their palm-print with the software in the free version, but you'll need to upgrade to a paid license in order to use it with multiple profiles. You can download the Workplace Protect software from Fujitsu's website, but frankly we're disappointed that the Palm Secure sensor wasn't ready to work out of the box.

On a more positive note, the assortment of ports is good. You get two full-size USB 3.0 ports as well as a USB-C connection (though sadly Thunderbolt 3 is not supported), plus an SD card slot, a choice of HDMI and VGA outputs for video duties, plus a fold-out Ethernet jack, which could provide a more stable connection than the 802.11ac Wi-Fi or optional 4G LTE. Speaking of which, to get wireless data up and running, you'll need to remove the battery from the laptop's underside, then slide a SIM card into the slot hidden beneath.

We initially liked the look and, to an extent, the feel of the Lifebook T937's keyboard. There's a decent amount of travel depth and plenty of space between the chiclet-style keys, so typos were rare, and unlike on some 13.3in laptops there's been no shrinking-down of the arrow, enter or backspace keys.

Nonetheless, we eventually grew tired of typing on it, for one reason: the key switches are just too heavy. In other words, it takes noticeably more force to fully depress each key than we're used to, which resulted in both missed inputs to begin with and tired fingers once we'd learned our lesson.

It's a similar story with the trackpad, in that it's mostly fine but has a fatal flaw: around the edges, taps and swipes simply don't register. We couldn't begin the count the number of times we veered to the left or right of the pad and single-tapped to make a click, only for nothing to happen.

At least the bundled stylus is spared a big weakness. While it's rather slim compared to the more substantial designs of, say, the Surface Pen or Apple Pencil, it's perfectly usable and accurate enough for quick markups. Palm rejection works reliably, and unlike the Stylistic R727, there's a convenient slot for storing the stylus on the corner of the base.

The Full HD touchscreen offers up another bunch of mixed results. To be fair, it handles colours very well: we measured its sRGB gamut coverage at respectable 92.3%, and its low delta E of 1.04 proves it has excellent accuracy in conveying those colours.

However, with a low 806:1 contrast and peak brightness of just 276.3cd/m2, the Lifebook T937 can look a bit dim even with such a rich colour palette. We didn't have any real issues indoors, but outside - or even close to a window - the low brightness and glossy screen finish won't put up much of a fight against the sun's rays.

There's no Coffee Lake on show here: you get a 7th-gen, dual-core Intel Core i5-7300U with 8GB of RAM. If you think that sounds like a fairly middling amount of horsepower, you'd be right, as the Lifebook T937 scored a decent but unremarkable 37 overall in our 4K benchmarks, including 16 for multitasking. More powerful configurations are available, maxing out at a Core i7-7600U processor with 16GB of RAM - but be warned that this will push the price up.

Still, the model on review offers plenty of power for most office applications, and it's worth noting that these scores beat those of the Dell XPS 13 2-in-1, a similar (if more consumer-leaning) convertible. Both, however, are a long way off matching the speed of the HP Spectre x360 - this should still be the hybrid you should be considering for maximum performance around the 1,000 mark.

There are side benefits to the Lifebook T937's CPU, though: namely its Trusted Platform Module (TPM) chip, and the fact that it's one of Intel's vPro processors. That means, in addition to a safe place for storing passwords and encryption keys, you get far superior support for remote access monitoring and maintenance, both of which could come in very handy in a professional environment.

Battery life is adequate as well. In our video rundown test, the Lifebook T937 lasted 7 hours 48 minutes, so you might even be able to make it through a full day away from the mains if you're not doing anything particularly intensive.

Even with these upsides, though, it's difficult to recommend the Lifebook T937 even for very specific use cases. Its hardware can irritate, especially the finicky trackpad, and while it's not the slowest convertible in its price range, the Spectre x360 easily outperforms it.

True, this HP laptop doesn't have the T937's more flexible hinge or enterprise security features, but the former only provides minor tactile benefits and the latter don't entirely work out of the box. Add in an uncomfortable keyboard and a flawed display, and the T937 just becomes too frustrating to consider over the x360 or even the slower (but better-built) XPS 13 2-in-1.

The Fujitsu Lifebook T937 sounds great at first: a Core i5-powered convertible with tons of security features and a fresh take on rotating hinges. Unfortunately, many of its appealing aspects are either compromised by other flaws or simply fail to function. 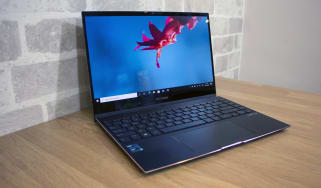