Acer Swift 5 SF514-52T review: Lightweight - in every sense of the word

Compromises mar what could be an admirable laptop 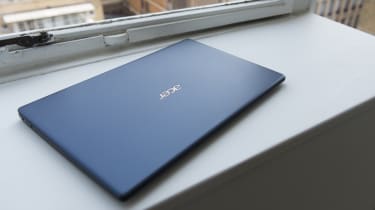 Acer is a firm stalwart of the mid-range laptop market, churning out a number of attractive devices at reasonable price points. These devices can often vary wildly in terms of quality, however, and rarely are they an unqualified success.

Last year's Swift 5, though, was a real winner. It was portable enough to still be convenient, had excellent battery life and was surprisingly powerful, all for less than 750 all-in. That's a very solid deal and earned Acer a well-deserved Value Award.

The company has now followed it up with a redesigned successor, and Acer is clearly thinking bigger. It's updated the CPU to one of Intel's latest 8th-generation chips, it's shaved more than 300g off the total weight and it's given the whole package a new coat of paint. All of this sounds like a welcome improvement, but unfortunately, Acer has also significantly raised the price.

Given that value-for-money was one of the biggest arguments in the previous generation's favour, can the new, more expensive Swift 5 still deliver enough punch to impress us in other areas?

The Swift 5 is an undeniably attractive laptop. The base colour is a matte-finished royal blue with accents like the logo and hinges picked out in soft gold. It's eye-catching without being ostentatious, and it's one of the more visually appealing devices that's come across our desk this year.

It's also incredibly light. Acer's laptops are generally on the petite side, but at just under 1kg, the Swift 5 is one of the lightest laptops we've ever seen. It feels virtually weightless to pick up, and we'd happily carry this laptop around all day with no complaints. The 14.9mm thickness means it's not one of the slimmest laptops out there, but it's not obnoxiously large, and it doesn't feel overly bulky in day-to-day use.

This svelte figure comes at a cost, however, and that cost is the materials that have been used to build it. The chassis, according to Acer, is constructed from a magnesium-lithium, but it feels uncannily like plastic, with a cheap, flimsy feel to it and none of the quality we'd expect from a metal notebook.

In fact, when we got it out of the box, the frame of our review unit was a little warped - the chassis wasn't quite flat, so one corner stood slightly proud of the desk. This doesn't speak volumes for the long-term durability of the laptop, and we wouldn't put expect it to last more than a handful of years. If you're looking for a notebook that's going to be a long-term investment, steer clear of the Swift 5.

Like the design, the keyboard is outwardly impressive, but disappointing on closer inspection. We experienced frequent issues with the space bar, for example, where it would simply fail to register keystrokes, leaving us to go back and re-insert spaces.

Aside from this, the keyboard isn't too bad; it's backlit and travel distance on the keys themselves is good, with a satisfyingly crisp feedback response. We've got no issues with the trackpad either, which is decently-sized and smoothly finished. But again, it's workmanlike rather than being genuinely satisfying to use - it's a far cry from the like of the Lenovo ThinkPad X1 Carbon or the MacBook Pro.

If there's one aspect of a laptop that's arguably the most vital, it's the screen, but the Swift 5's display continues the overall trend of disappointment. It uses a 14in touchscreen IPS panel with a 1080p resolution, and the overall quality is once again mixed. We measured a coverage rate of 91% of the sRGB colour spectrum, which is very good, but the maximum brightness of 235cd/m2 is less stellar and particularly bright lighting runs the risk of making it difficult to see. 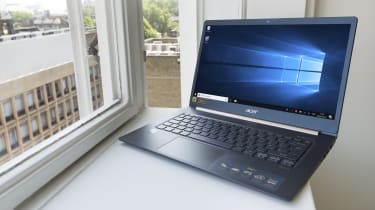 Similarly, an average Delta-E rating of 2.46 means the display isn't great for colour accuracy, and blues and greens are somewhat oversaturated. It's a decent screen for everyday tasks and video content does look rich and highly detailed, but it's not quite good enough for colour-accurate work like design jobs.

The Swift 5 has been something of a mixed bag thus far, but we were heartened to see that in addition to 8GB of RAM, our review unit featured an 8th-gen Intel Kaby Lake Core i7-8550U. This beefy processor has appeared in some of our favourite recent laptops - including the Lenovo Yoga 920 and the outstanding Dell XPS 13 - and earned them some seriously impressive results in our benchmark tests.

With that in mind, we were surprised to discover that the Swift 5 managed an overall score of just 66 in our tests - while that's still a creditable result and more than fast enough to power almost anything you could want to do with a laptop, it's some way off the scores achieved by laptops featuring the same chip.

Once we checked the CPU's temperature and utilisation, the reason quickly became apparent; the Swift 5's cooling is laughably inadequate. This is why aluminium is such a popular construction material for laptops - an aluminium unibody basically turns the chassis into one big heatsink. Although the Swift 5 does contain fans, they're too small and weak to keep the processor cool during intense loads, and we saw performance throttled as core temperatures rocketed to more than 90 degrees.

It's worth noting that we never experienced any issues in our day-to-day use of the Swift 5, and a score of 66 is still rather good. On the other hand, it's far behind what this processor is capable of, and much less impressive than similarly-specced devices. 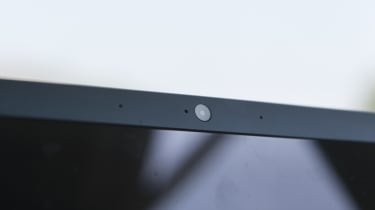 We suspect the poor thermals are also to blame for the Swift 5's rather stunted battery life, which clocked in at 5hrs 55mins in our tests. This is much shorter than we'd expect for a modern laptop - especially one that isn't fitted with anything outlandishly powerful.

The tug of war between keeping a laptop thin and ensuring it's got a decent number of ports is a tricky one to navigate, but the Swift 5 does it admirably, with two USB 3.0 ports and, a HDMI output and one USB-C port. Unfortunately, not even this aspect of the laptop is without compromise.

Aside from the fact that the USB-C port only uses the first-generation USB 3.1 standard rather than being Thunderbolt 3-compatible, its placement is also really annoying. It's right in the middle of the right-hand side of the chassis, rather than being in the top corner like it is on most other laptops. We use a mouse in conjustion with an external USB-C dock and because we're right-handed, we found that the USB-C port's awkward placement meant that the cable was constantly getting in the way.

Elsewhere, there's a built-in fingerprint reader for biometric authentication via Windows Hello, but we found that it only worked about 50% of the time. More often than not, it was quicker to just sign in with our PIN.

On the face of it, the Acer Swift 5 is a promising laptop, but it's not just marred by compromises, it's crippled by them. Although it looks good, the build quality feels flimsy and tacky, and a processor that should net it a very impressive performance score is hobbled by terrible cooling. Every aspect of this notebook is tinged with a faint edge of disappointment.

Price is usually the saving grace of Acer's laptops, but even this isn't quite enough to save it in this case. Even though the ticket price of 917 ex VAT is more than 450 cheaper than what you'd pay for the Dell XPS 13 and more than 200 cheaper than the identically-specced Yoga 920, Acer has cut so many corners to get there that it renders the exercise pointless.

The Swift 5 is super lightweight, true, but it's not enough to redeem its many faults. Save your money and go for the Yoga 920 or XPS 13 instead - you'll be happy you did.