Tech giant hasn't said it, but a teardown suggests it's tried to solve its faulty butterfly mechanism 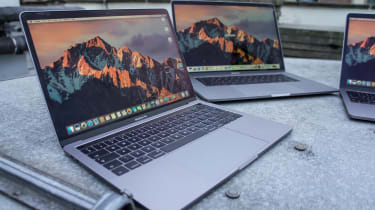 Apple's keyboard on the new 2018 MacBook Pro may have quietly fixed an issue where dust rendered keys inoperable, a teardown of the latest machine suggests.

Despite Apple claiming the new 2018 MacBook Pro keyboards were not made to prevent the widely reported issue, iFixit has taken apart the new model and found a silicone membrane that covers the mechanism under each key.

Sam Lionheart, lead teardown engineer at iFixit, said: "Apple is in the middle of several class-action lawsuits for the failure of their keyboards, so of course they can't just come out and say, "Hey, we fixed it!" That says there was a problem to begin with."

The problem being referred to is with Apple's faulty butterfly keyboards that have been the focus of lawsuits that allege dust and debris filtered in through the keyboard can make them useless.

The company has earlier admitted a "small percentage" of MacBooks had suffered a design flaw where letters or characters can repeat themselves or feel sticky, but a lawsuit filed in May this year alleges that dust and debris that filtered into MacBooks via the keyboards is the reason and that Apple's Genius bars wouldn't acknowledge the problem.

The butterfly mechanism was a big redesign for MacBooks in 2015 that saw the keyboard slimmed down by 40%. At the time the company claimed it was four times more stable than the older mechanism.

Apple has unveiled a surprise update to its MacBook Pro devices, including faster chips, upgraded specs and better displays.

The biggest news is that Apple's MacBook range will now feature Intel's 8th-gen processors. The 15in model will support hexacore i7 and i9 CPUs, while the smaller 13in model will support quad-core i5 and i7 components. In addition, the RAM allocation on the 15in model has been doubled from 16GB to 32GB, while both models now include an increased maximum storage capacity and Apple's TrueTone display technology.

There's a catch, however: the newer, more powerful hardware is only available on the more expensive Touch Bar models. The cheaper versions that have regular function keys instead of Apple's fancy OLED Touch Bar have to make do with the older specifications.

The new processors should offer a significant boost over the previous generations. While the clock speed has only seen a modest increase from last year's offering, the extra two cores should prove a big boon to multi-threaded application like video rendering. In fact, Apple is quoting performance improvements of 70% for the 15in MacBook Pro and 100% for the smaller 13in model.

Another major improvement is support for Apple's T2 chip, a security processor that was first released as part of the iMac Pro earlier in the year. In addition to enhanced protection features like secure boot and on-the-fly encryption, it also brings support for 'hey Siri' voice activation. Apple claims that the new models feature improved 'quieter' keyboards, too - although whether they last any longer than previous models' notoriously fault-prone keyboards is yet to be seen.

The refresh has come somewhat unexpectedly; Apple usually times updates of its hardware to coincide with one of its major launches or events, such as WWDC or its annual iPhone release. This time, the announcement was made with minimal fanfare.

Although the price of the base configurations has remained more or less the same, your wallet may be in for a shock if you want to max out the hardware specs; the top-end configuration (including hexa-core i9 processor, 32GB of RAM and a 4TB SSD) costs 6,209 inc VAT. For reference, that's well over 2,000 higher than what the previous top-spec model cost. This seems to largely be down to the 4TB SSD which, according to Apple's configuration page, adds an extra 2,880 compared to the standard 512GB SSD.

There have been other subtle changes as well - for example, the cheaper, non Touch Bar-equipped 15in model has now been totally removed, meaning that if you want to have the larger screen size, you'll now be forced to pay a higher price for the Touch Bar version.

As with most surprise Apple announcements, the new MacBook Pro configurations are available to buy now from Apple's site, and will be available through authorised resellers later in the week.