An excellent choice for security-conscious companies, with the best feature being a privacy mode so people can’t view your screen 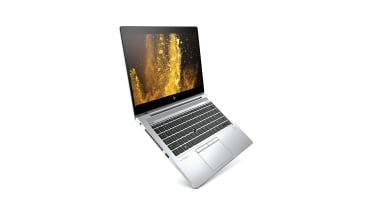 For those among you who place a big emphasis on security for the devices deployed across your organisation, the HP EliteBook 840 G5, and its array of security-centric features, is well worth considering.

Beyond the standard defensive layers, comprising an infrared camera, fingerprint reader and a smart card reader, HP has implemented a host of additional features such as a privacy mode'. Flicking F2 on the laptop will dim the display in such a way that viewing the screen from either the left or the right will result in a grey blur, but looks unchanged face-on.

HP's combination Sure Start Gen4 feature, far from echoing a government children's service, actually adds a very handy layer of insulation for the system BIOS. Say your machine is targeted with malware that corrupts the system in unspeakable ways, the Sure Start feature will revert your machine to the latest healthy version, while notifying both yourself and the IT team.

These additional security-centric features wouldn't matter a jot if the laptop itself was a dud, but thankfully it's a solid enough performer and reasonably good looking.

We wouldn't go so far as to label it stylish, but the business-like silver finish to the chassis vaguely echoes that of the Dell XPS 13, albeit with a porky base. We measured it at 13.1mm thick, and even though the lid is slim this laptop's total thickness of 19.1mm is nothing to boast about anymore. If 1.59kg sounds too heavy, note that our review sample included a touchscreen, which adds around 100g.

In HP's defence, that weight is in at least partly due to the fact this is a 14in panel to the 13.3in XPS 13, and the aluminium chassis does feel suitably sturdy and rugged. HP weakens such arguments by including such big bezels, though. The 8mm-wide side bezels look okay, but the one at the bottom is very near a full inch, while the top bezel is 20mm tall. These make the 14in screen feel smaller than it is. 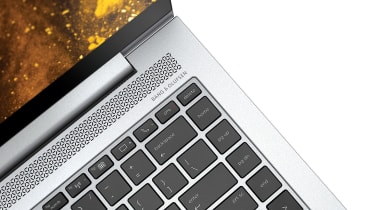 The screen itself is great. Its star feature is the ability to hit a blazing 625cd/m2 for use outdoors, while a Delta E of 2.15, contrast ratio of 1,071:1 and sRGB gamut coverage of 91.7% are all fine scores for a laptop. We don't have many complaints about the keyboard either. It would have been nice to have a little more travel in the keys, but that's just us being fussy. The only thing that stops us being more fulsome in our praise is that the touchpad sits too far to the left, so we had to adjust the position of our palm when typing or it would nudge the position of the cursor.

HP includes a few nice features to make up for this minor annoyance. One is the trackpoint in the middle of the keyboard, with accompanying mouse buttons below the spacebar, which come in handy in cramped conditions. It's also curious to see dial and hang-up buttons at the top-right of the keyboard. This highlights HP's aim to make this a conferencing-friendly laptop, with the promise of "crystal clear collaboration" thanks to a third microphone on the outside of the lid. The idea is that, if other people in the same room are taking part in your call, this third mic will help pick up their voices; if it's just background noise, the laptop will detect it and block the sound.

HP promises up to 14 hours of battery life from the EliteBook 840, but our video-rundown tests suggest you'll be fortunate to reach this. With the screen brightness set to 170cd/m2 and Flight Mode activated, it lasted for 6hrs 30mins. You'll want to carry the 355g power supply when travelling, but at least you won't need any adapters - along with two USB 3.1 ports, there's a Thunderbolt 3 port, full-size HDMI output and an Ethernet slot. 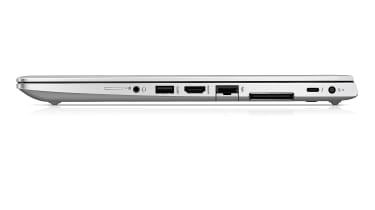 Yet more options come via HP's existing side-mounted docking stations - which are still compatible - and the upcoming Thunderbolt Dock G2, which can power two 4K displays. This laptop has the potential to be quite a workhorse, too, thanks to Intel's 8th-gen Core processors and, in future models (but sadly not our test system), optional Radeon GPUs.

We tested the high-end model (code 3JX09EA-ABB) that included the popular quad-core Core i7-8550U processor with 16GB of RAM and a fast 512GB PCIe SSD. This combination was potent enough to push the Dell XPS 13 over 100 in our benchmarks, but for reasons we can only speculate on - most likely thermal throttling - it only hit 77. We're not too concerned by this, though - our benchmarks are stress tests that last over half an hour, and in general use we doubt that many people will notice a slowdown.

While we wouldn't rush to buy the EliteBook 840 G5, there's much to like about the device. The conferencing features. The extra levels of privacy. The convenience of built-in Ethernet and HDMI ports to accompany Thunderbolt 3. This level of versatility, and prices starting at 1,099 inc VAT on HP's website, make the EliteBook an attractive option for security-sensitive businesses.

While we wouldn’t rush out to buy the EliteBook 840 G5, there’s much to like here. This level of versatility, and prices starting at £1,099 inc VAT on HP’s website, make the EliteBook an attractive option for security-sensitive businesses.