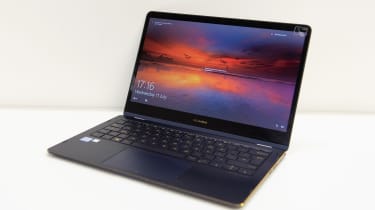 There's no denying Asus makes some pretty good-looking devices, whether we're taking powerful business laptops, notebooks or ultrabooks. The company has great coverage within the market too, offering a device for all types of user.

However, Asus has a lot of competition and there are some who think the manufacturer doesn't have what it takes to compete with the big boys.

But the Zenbook Flip S does at least put on an excellent show. It's a very thin 2-in-1 and, with an 8th-generation Intel Core i7 processor, it should perform pretty impressively.

It takes its lead from its predecessor, the Flip UX560UQ, which again, was a good performer, but with an upgrade in design and perform, can it take on the rest of the 2-in-1 world?

Asus isn't shy about the Zenbook Flip S's design, shouting about it as one of the headline features.

It's finished in a royal blue aluminium in spun metal texture, with gold highlights to promote the impression of luxury. It feels robust and sturdy, despite its feather-weight and slimline design.

The keys are again highlighted with a luxurious gold backlight, with little features like this generating the wow factor. 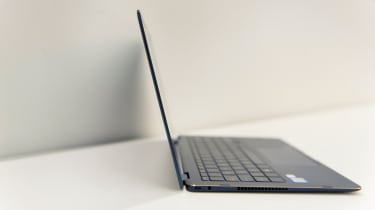 The first thing that strikes you about this machine, beyond the fetching royal blue finish, is its razor-thin chassis. Marketed as the world's thinnest convertible laptop, measuring 10.9mm, the Flip S boasts versatility almost unrivalled by similar machines a good few millimetres thinner than the 13.7mm Dell XPS 13 2-in-1, and the 13.6mm HP Spectre x360, while at 1.1kg the Flip S is about in line with most models of this size.

The location of its power button is the only design flaw. Nestled in the middle of the chassis' right-hand side, its position leaves it prone to being accidentally pushed, either while picking the machine up or while holding it firm to insert headphones into the 3.5mm jack sat on the opposite side. Although it is easy to overcome with time, the positioning takes some getting used to, and proved deeply frustrating at first.

Asus' 13.3in 1080p touchscreen display, also available in a 4K variant, is aesthetically well-designed and sits beneath a sheet of Corning Gorilla glass with an anti-glare coating - which Asus claims is ten times tougher than conventional soda-lime glass.

The quality of the display itself is decent. Our tests recorded an 85.8% coverage of the sRGB colour gamut, but it's overshadowed by the likes of the latest Dell XPS 13 and Microsoft's 2017 Surface Pro, scoring 94.3% and 97.5% respectively. Blues tend to be oversaturated, while greens and reds are marginally out-of-line, slightly oversaturated and undersaturated respectively.

Meanwhile, a recorded maximum brightness of 324cd/m2 means you'll run into few issues using the laptop outdoors. It's only slightly dimmer than the HP Spectre x360's 327cd/m2 but falls well short when compared against the latest Surface Pro, which boasts an astonishing 437cd/m2 maximum brightness.

Similarly, the Flip S boasts a strong contrast ratio of 1177.5:1, and black level of 0.27cd/m2, which coupled with fairly accurate colours means that while there are better options for performing heavy image-based work, the Flip S won't disappoint.

Unfortunately, a slight looseness in the 360-degree hinges lends the screen an unfortunate wobble. Prodding at the screen in laptop mode will tilt the screen a few millimetres backwards, and typing at moderately quick speeds produces a series of ever-so-slight jostles that are subtle, but still distracting.

Speaking of its keyboard, the Flip S is an absolute pleasure to type with. Despite its size, the well-spaced and sizeable keys built into the 2-in-1 have a 1mm travel distance. The strokes are not only firm but feel weighted and satisfying thanks to the keys' forceful feedback, resulting in a highly responsive experience. 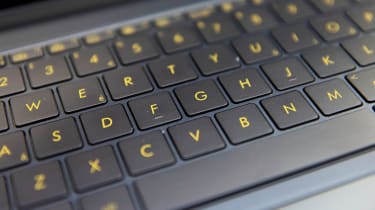 One standout feature is the effect its subtle and adjustable backlighting has as it shines through the translucent golden markings on the individual keys, bringing the machine to life in brilliant fashion. The Caps Lock key features a dim golden indicator which, although easy to miss, remains consistent with the machine's high standard of design.

Similarly, Asus has fitted a large, glass-covered touchpad that delivers an almost-seamless experience - smooth to the touch and, again, aesthetically in-keeping with the design, and it also allows for customisable four-finger commands. The left and right-clicks are well-positioned and rarely cause problems.

An intermittent but persistent issue, however, was the manifestation of 'pseudo-dead zones' along the very edges of the trackpad, approximately half an inch from the top, left and right-hand sides. Finger movements into these regions from the centre were fine, but movement from these areas were unresponsive. We recorded this for approximately two days, after which time the touchpad performed as normal.

The ZenBook Flip S is fitted with a quad-core Intel Core i7-8550U processor, but can also be purchased with an Intel Core i5-8250U processor. While it can house up to 16GB of LPDDR3 RAM, the 8GB it is fitted with by default in all variants should be sufficient for most office-based tasks. Elsewhere the machine has a 512GB PCIe 3.0 M.2 SSD hard drive (as well as a 256GB option).

The processor scored a modest 54 in our performance tests, lagging somewhat behind rivals. It performed exceptionally-well in single-threaded tasks, registering a score of 105, but suffered significantly while performing multi-threaded operations, scoring a much less impressive 36. Meanwhile, the Geekbench 4 results for single-core and multi-core processes comfortably outperformed the likes of the 2018 HP Spectre x360.

Beyond our tests, the ZenBook suffers from a noticeable cooling issue that results in fairly significant overheating on the left-hand portion of the device - particularly when plugged into an external display via either USB-C port or power supply, but also to a lesser extent when unplugged. The base of the laptop, especially, can be blisteringly hot to the touch.

It's particularly distracting when resting your left palm on the surface of the chassis while typing, or even resting the device on your lap, and is unimpressively prevalent while its 'quiet fan' setting is turned off. The fan is indeed incredibly quiet, almost silent, which is a big positive when taken in isolation - but we would comfortably trade an extra few dozen decibels for at least a partial solution to the ZenBook's overheating issue.

We initially suspected that this poor cooling was to blame for the ZenBook's somewhat disappointing performance. However, despite the fact that the CPU reached fairly toasty temperatures in the 50-60 degree range and was at 100% load during the multi-tasking portion of our benchmarks, it was well off the maximum temperature of 100 degrees.

The battery is another major weakness, lasting a disappointing 6 hours and 24 minutes in our video test, falling well-short of Asus' claim of a ten-hour-plus lifespan. This 2-in-1 will struggle to get you through the working day without needing its power-saving settings flicked on, unfortunately, and while it boasts a fast-charge capability, restoring a touted 60% capacity in 49 minutes, we found this hitting only 32% (charged while in use).

The distinct lack of inputs is this laptop's' greatest weakness; Asus' slender device fits only two USB-C ports, one on either side of the chassis, and a 3.5mm headphone/mic jack. This lack of ports is quite clearly the kind of trade-off one should expect from such a slim device, and yet we can't help but feel that it lacks the functionality to stand out as a leading business device. 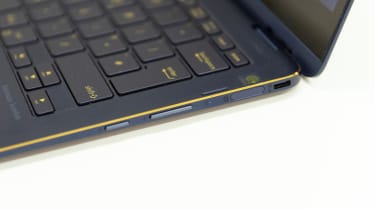 Nestled between the power and volume buttons and the USB-C port on the right-hand side of the chassis is an integrated fingerprint scanner that allows users to login seamlessly via Windows Hello.

The sensor's subtle inclusion - measuring just 16mm long by 3.6mm wide and among the smallest found according to Asus - is almost completely missable. To make up for its size, however, the scanner only needs to register a portion of your fingerprint to log you in - but it isn't always fully reliable.

The ASUS ZenBook Flip S is a wonderful machine that not only exudes style but holds its own against its competitors, especially the 2018 HP Spectre x360.

The trouble with exuding as much style as this 2-in-1 does, boasting an utterly spectacular design and build quality, is that it the raises the expectations in terms of substance. On this front, ASUS' light and versatile convertible leaves some room to be desired, but performs well enough, without particularly standing out.

Although a pleasure to use, the machine is married by a handful of minor performance and functionality issues - including a lack of ports - which, combined with a high price tag (the Dell XPS 13 2-in-1 is available for 959 exc VAT for instance), means it edges more on the side of luxury than necessity.

The Asus Zenbook Flip S is an imperfect marriage of style and substance; a classy and competent machine marred only by a handful of minor flaws.