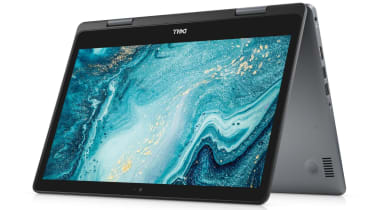 Dell is launching a high-end 2-in-1 Inspiron-branded Chromebook for the first time in the hopes that its portability and premium hardware can win over business users.

The Inspiron Chromebook 14 2-in-1, announced this week at IFA 2018, will boast a 14in 1080p display that can be rotated 360-degrees to flip between laptop and tablet modes, while Dell claims its battery life will last 15 hours.

Internally, the device will feature an 8th-generation Intel i3 8130U processor, with 4GB RAM and a 128GB-sized SSD. Meanwhile, beyond running Chrome OS, Dell's new 2-in-1 will also be able to install Android apps from the Google Play Store.

It will also feature a standard backlit keyboard, a USB 3.1 port, two USB-C ports, a microSD card slot, a 3.5mm headphone jack, and touchscreen pen with a garage bay located at the 2-in-1's base.

"We are excited to be at IFA again this year to showcase our technology innovations that continue to enhance the computing experience," Dell's senior vice president and general manager for consumer and small business Ray Wah said.

"We've invested in redesigning our portfolio of mainstream laptops and 2-in-1s with beautiful designs, premium materials and thoughtful features, illustrating our ongoing dedication to deliver quality devices every user is proud to carry."

Perhaps the most head-turning part of the Inspiron Chromebook 14 2-in-1's announcement - set to attract the most attention from business users - is Dell's claims of a 15-hour battery life (equivalent to almost two full working days).

This is based on the Google Chrome Power LoadTest, Dell says, also claiming the "actual battery life may be significantly less" than the test suggests, and may vary based on specs and usage, as well as power management settings and the machine's condition.

Set to launch in late October from $599 (or 460 based on current conversion rates), Dell's latest offering is its first foray into the premium 2-in-1 Chromebook market following a handful of high-end device launches by rivals such as Samsung and HP.