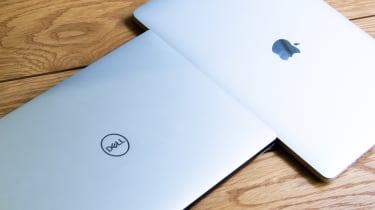 It used to be the case that if you wanted a business-class laptop, you had to accept certain compromises. Looks, for example; enterprise-grade machines were often unprepossessing slabs of black plastic, lacking the visual flair of their consumer counterparts. They were often thicker and heavier, too; a trade-off for the more powerful components demanded by business users.

Those days, however, are long gone. Now, not only are business-class devices as slim and attractive as consumer laptops, they're frequently the same device. As users demand better experiences from their work machines and high-powered components become cheaper and more readily available, the worlds of enterprise and consumer notebooks are merging.

Take the twin examples of the Dell XPS 13 and the Apple MacBook Pro - two devices that expertly straddle the line between home and business, with a combination of high-performance hardware and attractive, eye-catching designs.

Both are modern and good-looking enough to keep users happy, while a suite of business-friendly features ensure that they can minimise headaches for the IT department as well.

But which one is best-suited to businesses? Aside from the whole 'Mac versus PC' debate, there's actually not as much to separate these two devices as you might think. Both are more than capable of cutting it in an enterprise environment, with buckets of features and gorgeous screens. We've put them through their paces to find out which one comes out on top.

When you're paying upwards of 1,000 for a laptop, it's not unreasonable to expect it to look the part. Thankfully, both the XPS 13 and the MacBook Pro seriously deliver in this regard. Apple's design is arguably the more timeless, with its instantly-recognisable anodised aluminium frame and smooth, rounded corners. However, Dell's angular, black-accented aesthetic exudes a certain level of business-like sophistication - the XPS 13 looks like it would be just as comfortable in a data centre as it would in a coffee shop. 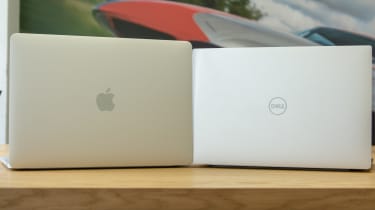 Both laptops are also highly portable, although surprisingly it's the MacBook that's tipping the scales more than the XPS, with a 1.37kg weight over the XPS 13's 1.21kg. It's also thicker than Dell's notebook, measuring 14.9mm versus the XPS 13, which measures 11.6mm at its thickest edge.

While both laptops are undeniably attractive, we have to say that we're slightly more taken with the XPS 13's appearance. It has slightly more visual flair than Apple's offering, and although there's not much in it, it's slightly more portable too.

Dell XPS 13 vs Apple MacBook Pro 13in: Keyboard and trackpad

It may seem like a small thing compared to something like the display or performance, but the keyboard is one of the most important things a laptop needs to get right. After all, you're going to be using it virtually every moment you spend with your laptop, so it pays to make sure it's the experience is a good one.

Dell's keyboards are generally very good, with crisp action and firm feedback. The backlit chiclet keys are well-spaced too - with the exception of the half-height arrow keys, which are severely cramped and led to us hitting the wrong keys on numerous occasions. 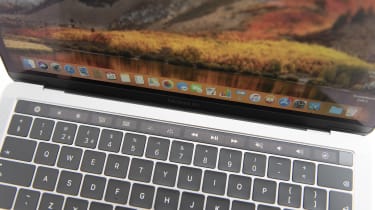 If Dell's keyboard is good, then the MacBook's is nothing less than sublime. Featuring Apple's trademark butterfly switch mechanism, the keys have virtually no travel depth. We'd normally say this was a bad thing, but as they also need virtually no activation force, it actually results in a really pleasant typing experience once you get your head around it and adjust your typing style accordingly.

Apple's latest MacBook Pro iteration has also added a rubber underlay beneath each keycap. This is ostensibly to make the keyboard quieter (and it does, noticeably) but it's also designed to prevent dust from getting into the internal workings and borking the keyboard. A positive step - albeit one that probably shouldn't have been necessary in the first place.

The MacBook also wins on the trackpad front. The XPS 13's trackpad is perfectly adequate, but Apple's is much more spacious and has a nicer finish to boot.

Apple's devices have historically had a very strong pedigree when it comes to their displays and, as expected, the most recent MacBook Pro is on full form. The 2,560 x 1,600 13.1in IPS panel looks great, with perfect colour accuracy and reproduction, as well as a stonking contrast ratio of 1,451:1 and a blazing 502cd/m2 brightness.

It also features Apple's True Tone display technology - a first for the company's notebooks. Previously appearing on Apple's mobile devices, this feature dynamically adjusts white balance to prevent eye-strain, but be warned that it will play merry hell with colour accuracy. 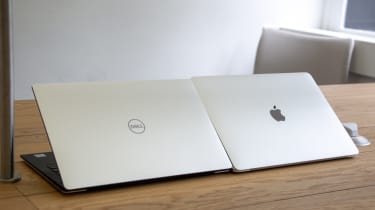 The XPS 13, meanwhile, is a slightly different beast. For starters, it's available in two resolutions: 1080p and 4K. The MacBook Pro occupies a sweet spot more or less in the middle of these two resolutions, which we'd say is probably the optimum - 1080p is a little on the low side for detail-oriented design work, but 4K is total battery-obliterating overkill for a 13in display.

We tested the 1080p version, which was perfectly fine for most things - although we did find ourselves missing the ever-so-slightly crisper visuals of the MacBook Pro. Unfortunately, the colour quality wasn't quite on par with the MacBook either. Its colour reproduction and accuracy were ever-so-slightly behind the MacBook's, as were its contrast and brightness. This is still an excellent result, mind you, and far from disappointing - but Apple's notebook was better.

Dell XPS 13 vs Apple MacBook Pro 13in: Specs and performance

One of the main reasons Apple has been able to maintain its place as one of the biggest laptop-makers in the world is that its devices are generally among the most powerful in their category. Even when they're a generation or two old, MacBooks can usually be relied upon to be relatively speedy - something that isn't always true of Windows machines.

Recently, however, Windows devices have been closing the gap. Indeed, the 15in variants of the MacBook Pro and XPS were virtually neck-and-neck in our performance tests - an achievement that was unthinkable in previous years.

Now we come to the 13in models, both of which are advertised as having Intel's 8th-gen processors, with both Core i5 and i7 models available. The models on test both used a Core i7 processor and 16GB of RAM, offering a (seemingly) level playing field. 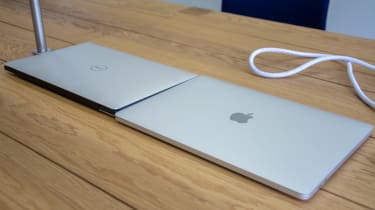 Sadly, the XPS 13 has not been able to equal its bigger brother's achievement. In our performance benchmarks, the MacBook Pro's storming score of 150 left the XPS eating its dust with a score of 96 - more than 50% slower than Apple's laptop.

The reason for this, we suspect, is that while both machines technically do have Intel's 8th-generation chips inside them, the MacBook Pro actually has a more advanced processor. It's part of the 'Coffee Lake' family, whereas the XPS 13's processor is part of the Kaby Lake R product cycle, a sort of mid-generation update before Coffee Lake officially arrived.

The upshot is that the MacBook's Core i7-8559U processor - with its higher clock speed and TDP - runs rings around the Core i7-8550U used in the XPS 13. That isn't to say that the XPS is slow by any stretch of the imagination; it's more the case that the MacBook just happens to be frighteningly quick.

Storage, unsurprisingly, is another victory for Apple; with 2.2GB/sec for reads and 44MB/sec for writes, the XPS is putting in a good show, but we've yet to see a laptop that can equal the MacBook Pro's 2.6GB/sec combined read and write speeds.

With high-end notebooks, the trade-off for increased power is usually that battery performance has to suffer to some degree. Happily, however, this is not the case here. Battery life is excellent for both the XPS 13 and the MacBook Pro, considering how powerful both machines are. 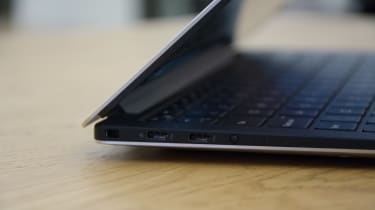 The MacBook managed a score of 8hrs 41mins in our battery tests, which is a full hour longer than the previous model. It's the XPS that soars into the lead here though, with a sensational result of 10hrs 7mins - a clear win over Apple's device.

Dell XPS 13 vs Apple MacBook Pro 13in: Ports and features

The XPS 15 scored points over the 15in MacBook Pro with a more generous and well-rounded selection of ports, but sadly that's not the case with the smaller models; both XPS 13 and 13in MacBook Pro have gone all-in on the Thunderbolt 3 standard, cutting older ports like USB 3 and HDMI altogether.

The MacBook has a slightly bigger allocation, with four Thunderbolt 3 ports - the XPS, by comparison, only has two, plus an additional (slower) USB-C 3.1 port. It does a Micro SD card slot though, which goes some way to making up for it. In any case, the reality is that you'll want to invest in some form of docking solution to accompany both of these devices.

Elsewhere, there a couple of neat features that the XPS 13 has over the MacBook Pro; principally, facial recognition via Windows Hello. While both devices offer fingerprint readers for biometric login, only the XPS offers face recognition. The only negative is that the camera in at the bottom of the screen, which means horrible angles for any video calls you may want to do.

The MacBook Pro is still sporting the Touch Bar, too. It's a feature we're still on the fence about. We found ourselves rarely using it, but it's possibly something that requires using on a more regular basis before it starts becoming part of your routine.

While you may have a natural preference for one or the other, there's simply no getting away from the fact that both the Dell XPS 13 and the13in Apple MacBook Pro are truly fantastic laptops. They're both attractive, capable and powerful, and we doubt anyone would be particularly disappointed to find either gracing their desk. There can only be one victor, however, and the MacBook Pro's staggering performance makes it an easy choice. 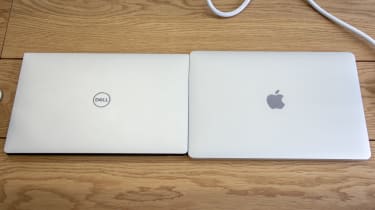 Admittedly there's a big price differential; with the top processor and RAM options and a 256GB SSD, the MacBook Pro comes in at 1,833 exc VAT, while a comparably-equipped XPS (with a bigger hard drive) will set you back 1,374 exc VAT, saving you around 500. Even bearing that in mind, however, the MacBook's extra oomph makes it worthwhile for those that have to handle serious workloads.

Despite the XPS 13's better battery life and slimmer, lighter frame, the MacBook Pro is too much of a powerhouse to pass up on. If you can't justify taking the extra 500 out of your budget then the XPS won't disappoint, but if you want the best then it's Apple all the way.

The XPS 13 puts up a spirited fight, with a stellar battery life, a slim frame and a reasonable price, but it just can’t compete with the raw power Apple has put into the MacBook Pro.