HP Envy X2 (Snapdragon) review: A slow start for the future of 2-in-1 laptops 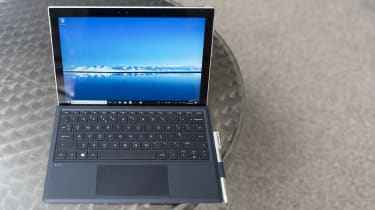 The hybrid laptop used to be seen as a bit of a passing fad, but that opinion has been changed by the need for more high-powered portable technology. Indeed, there are more smartphones in the world than actual people and the latest versions of those have bigger screens with edge-to-edge displays accommodating the demand for streaming and flexible working. This easily portable and powerful tech is now influencing hybrid laptops. It's certainly influenced HP's Envy X2, which is, in many ways, a great big smartphone.

This is one of the first laptops to have a Qualcomm Snapdragon 835 processor rather than a traditional Intel chip and it's becoming a trend as Samsung, Lenovo and Asus are set to release always-connected laptops with Snapdragon 850 chips. Snapdragon is the power behind the majority of the worlds best flagship phones, such as the OnePlus 6, which uses the Snapdragon 845. In essence, the HP Envy X2 is a giant smartphone; one that comes with a clip-on keyboard, 4G capability and its own phone number. But, is this a turning point in portable tech or just a laptop with the wrong kind of chip?

The Envy X2 is not a very beautiful laptop. We're not saying it's ugly, it's just that it's aesthetically inferior compared with other 2-in-1s that benefit from more iconic designs, such as the Surface Pro or the iPad Pro. This is a very square device, and although it has a neatness with its curved corners and aluminium frame, it's the large 12.2in screen that looks a little dated. However, this is a screen built with Gorilla Glass, so it's built more to be durable than it is to be pretty. 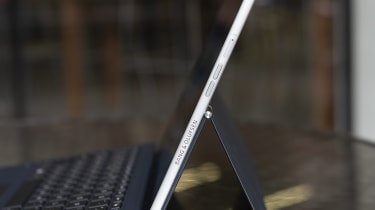 The detachable keyboard would also suggest the Envy X2 has durability in mind as it also acts as a case. It wraps around the front and back of the device, stopping any unwanted scratches and scuffs and providing that extra bit of buffering should it slip from your grasp. This does make the Envy X2 a bit of a chunky monkey, as it already weighs 720g and the keyboard bulks it up to 1.22kg. Weight-shaming aside, it doesn't add much to the slight 7mm frame and you'll be thankful for it in the event of an accidental drop.

The Envy X2 has a wide-bordered display with a 1,920 x 1,280 resolution, which is slightly better than the usual 1080p standard seen on most laptops. Although HP has added some smartphone-style features, it's a shame it hasn't adopted the edge-to-edge display seen on devices like the Galaxy S9. It's an attractive feature, albeit one that would make it hard to use as a tablet.

Inside, the screen is packed with quality. Its contrast ratio is superb at 1,377:1, with a maximum brightness of 505cd/m2. This makes it good enough for use in most conditions, although we found it struggled a little in the very brightest of direct sunlight. It's nothing that is going to stop you working, though. The colour accuracy is excellent; the Envy X2 produced excellent scores on our tests, covering 96.1% of the sRGB colour gamut and delivering an average Delta E of 1.45. To put that in context, that's 1.1% better than the Surface Pro, which has an outstanding screen.

The keyboard is stylishly finished in faux-leather and the actual keys themselves are fantastic. They make a satisfying click when pressed and are super responsive. The trackpad is also good; it's wide and very easy to operate, although it does require a heavy press to click, which gets tiresome after a while. 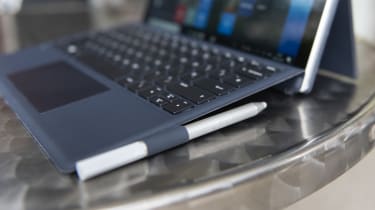 The accompanying stylus is a real joy, though. It's perfectly weighted, responsive and as fully functional as its rivals, such as the Apple Pencil or the Surface Pen. It's smooth and effortless, but without feeling slippery - similar to writing on a whiteboard. So far, no stylus has recreated that magic of pen and paper, but this comes pretty close.

Here is where we have the first real issue with the Envy X2; the performance. Where Qualcomm Snapdragon processors feel super fast on smartphones, this laptop is noticeably sluggish. It only just about pipped the ageing and underpowered Asus Transformer Mini in our Geekbench tests, clocking up single and multi-core scores of 846 and 3,195. Despite its innovative use of Snapdragon chips, the Envy X2 suddenly started to fall short of the high standards set by the Surface Pro and the super speed of the iPad Pro. This is a 1,000 laptop, so it's on the cheaper side compared to those devices, and that is sadly reflected in the performance.

Its second big issue is that it comes with Windows 10 S preinstalled. This is fine if you want to stick to Windows Store apps like Microsoft Edge, but when you switch to Windows 10 Pro it all comes unstuck. The Snapdragon hardware doesn't run Windows ARM 64 code as smoothly (or at all, sometimes) so it needs an emulation layer to translate the instructions of applications in 64-bit, because it only supports 32-bit x86 applications.

Emulators on a 64-bit machine with either AMD or Intel CPU don't have this problem because the emulator runs on the processor itself. An ARM system, however, has the emulator running in the software where it has trouble running multiple codes, which slows the application down. So you'll find downloading and opening the likes of Chrome slower than an arthritic donkey going up a hill with a full saddle load.

Suddenly, the 1,000 price tag starts to look excessive, but if there is anything to save the HP Envy X2, it's battery life, which is admittedly excellent. From a full charge, we used it for a whole day's work, streamed content on our commute home, used it for some late-night admin and a little browsing over the weekend and we still had some juice for the start of work on Monday. In our video-rundown tests, it made it through 11hrs 48mins in flight mode with the screen set to a brightness of 170cd/m2, which is hard to beat for most Windows laptops. Sadly, it's still not enough to compensate for its slow performance. 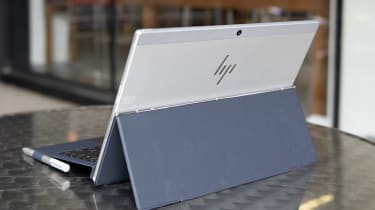 Despite the snail-like processing speeds, it does have fairly quick facial recognition security that opens your profile with a glance at the screen, but that is its only speedy feature. It's such a shame the Snapdragon has let the HP Envy X2 down in the performance stakes because the smartphone-like technology actually gives the thing a neat selling point and perhaps an indication to where the market is going. It's a laptop with 4G capability built-in for connectivity independent of Wi-Fi, which is pretty useful for those little bits of extra work that would otherwise have to wait until you got home and connected.

What started off so well quickly dissolved into mediocrity as the Envy X2's performance issues overshadowed any positives. To give the Envy X2 its due, you'll get through a lot of work before you need to charge it up, which is great for flexible and remote working, but you'll forever be undercut by slow speeds and problematic software. Despite the quality of the stylus, you may as well reach for actual pen and paper and save yourself the excruciating wait for the thing to work.

But despite leaving a mixed impression on us, the idea is exciting. Smartphone-style laptops float our boat. Unfortunately, while this could well be the future of laptops, the Envy X2 is a failed execution of it.

The future of 2-in-1 laptops may be about smartphone-like capabilities and Snapdragon processors, but the HP Envy X2 hasn't the speed to take us there.