HP EliteBook 745 G5 review: A feast for the hands, not for the eyes

This security-laden laptop trips over some quality issues, even when it excels elsewhere 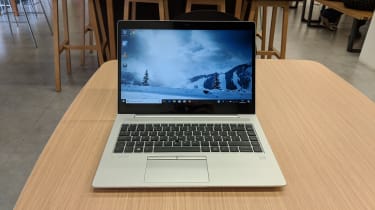 Ryzen-based business laptops remain surprisingly rare, given that AMD's current crop of chips tend to be better multitaskers than their Intel counterparts. Perhaps the HP EliteBook 745 G5, with its quad-core Ryzen 7 2700U, can make a convincing argument for the platform.

This silvery notebook is a bit plain aesthetically, but well-crafted nonetheless. The metal chassis has a pleasantly expensive-feeling matte finish, and the whole thing just seems more solid and rigid than the average laptop. That includes the hinge, which requires a reassuring amount of torque to rotate, and the screen, which barely flexes at all.

At 17.9mm, it's about middling in terms of thickness, and at 1.48kg it comes in pretty heavy for a 14in device. Still, we were a lot happier carrying it about than we have been for any 15.6in laptop, save for the LG Gram.

Being an EliteBook, security is given a special focus. On the hardware side, that means a smart card reader, a fingerprint reader and an infrared camera, which is compatible with Windows Hello for logging in via facial recognition. For us, this worked very well indeed, unlocking to desktop almost instantaneously after we sat down. The fingerprint reader is nice and fast, too. 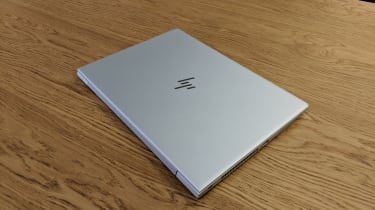 HP has also included its Client Security software. One of its best features, full disk encryption, isn't supported on this particular laptop, but it still adds numerous safeguards - like a requirement for additional password or fingerprint authentication before Windows even starts up, and HP Sure Recovery, which allows you to reimage the EliteBook over a network connection in the event of a malware attack. Fortunately, we didn't need to make use of the latter, but the former is just as user-friendly as signing in through the usual Windows lock screen.

There's also a decent mix of connections: two full-size USB3 ports plus a USB Type-C with video output support, along with an HDMI port, Ethernet jack and a slot for HP's optional Thunderbolt Dock G2. A SIM card slot also sits on the right edge, though actually being able to use it is an optional extra - it was blocked off on our test model.

Typing on the EliteBook 745 G5 is, for the most part, a pleasure. Besides some weirdly narrow up and down arrow keys, the chiclet keys are large enough for easy, comfortable tapping, and the switch design has a wonderful chunky-yet-crisp feel to it. A strong white backlight also ensures it's useable in any lighting conditions, though it will automatically shut off after a short period of idling, in order to save battery.

The EliteBook 745 G5 is awash with other inputs: there's the usual trackpad, but also a touchscreen and a pointing stick in the middle of the keyboard. This last one doesn't have any issues in itself, but does cause one of very few problems with the keyboard: three of the keys have had chunks taken out of them to make room. The B key has suffered particularly badly - it was genuinely offputting to catch our fingers on the little rubber nub every time we went for a key input. Compared to how, say, Lenovo builds pointing sticks, which are lower-profile and don't cut into the keycaps so much, it's a much less elegant implementation. 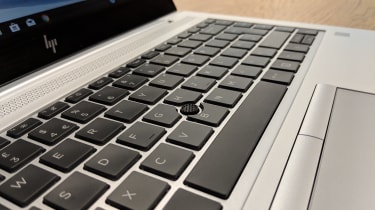 Luckily, the trackpad is much, much better. The texture is wonderfully conducive to smooth swipes, and it feels spacious without the sense that the body had to become larger as a result.

The 14in touchscreen isn't too bad at a glance; the Full HD resolution is plenty sharp, and contrast looks high; we confirmed this in our colour calibrator tests, measuring a very respectable contrast ratio of 1,264:1.

However, these tests also revealed the display's ugly side. sRGB colour gamut coverage is particularly low, at just 56.8%, and the average delta E is particularly high, at 3.45. In other words, despite the laptop's professional leanings it's far from ideal for things like graphic design and photo or video editing.

The biggest problem is brightness. With the laptop plugged in, it only manages a peak brightness of 213.7cd/m2, which is low enough - but unplugged, with brightness settings still at maximum, it only reached a palty 87.8cd/m2 -- not even enough to meet the 170cd/m2 we use for battery testing. Combined with the glossy finish, this screen has problems with the reflections of overhead office lights, let alone the sun.

Overall, this screen is a big letdown after the EliteBook 840 G5 - which seems to have the exact same chassis as the EliteBook 745 G5, if different internals - and its much more professional-grade display. 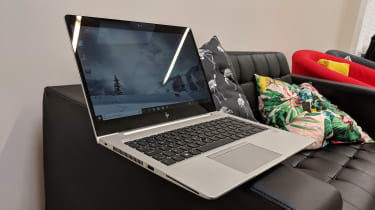 Although our Ryzen 7 unit managed good showings in the image and video benchmark tests, scoring 102 and 86 respectively, it only produced 67 in the multitasking test, which forced down its overall score to 79. That's barely better than the mid-range, consumer-focused Acer Swift 3, which only has a Ryzen 5 2600U, which is disappointing.

Then again, it's an awful lot better than most similarly-priced ultraportables, such as the Asus ZenBook 3 Deluxe and HP's own Spectre 13. The latest Dell XPS 13 is more powerful than all three, but also costs hundreds of pounds more.

There's no arguing, however, that battery life is anything other than a letdown. It only lasted 5 hours 50 minutes in our video rundown test, and remember that's at a lower brightness level than we usually test laptop batteries at.

For such a straight-laced laptop, the EliteBook 745 G5 sure is an odd one: marvellous build quality and features colliding awkwardly with a dull screen and short battery life.

If the security aspects appeal, the best course of action would probably be to spend a little extra on the EliteBook 840 G5. It's almost dead even on performance, but has a brighter, bolder screen and will last longer away from the mains.

The EliteBook 745 G5 is a tale of two laptops: one, a beautifully-made professional notebook with lots of tools for keeping your data safe, the other a disappointing misstep with a budget-tier screen. The strengths just about outweigh the weaknesses overall, but there are better-rounded alternatives.