The 6th-gen ThinkPad X1 Carbon is a worthy business ultraportable, but you’ll have to put up with some kinks 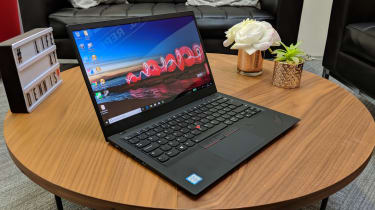 The venerable ThinkPad range has long been a staple of the business world. The ThinkPad's storied history stretches all the way back to the early 1990s, when it was still owned by IBM. Nowadays the ThinkPad line is designed and manufactured by Lenovo, but its business appeal remains as firm as ever.

It's not hard to see why; the combination of sleek, minimalist design, high-end performance and business-friendly features that the range is known for making it ideally suited to being rolled out as a corporate device.

The series' flagship device, the ThinkPad X1 Carbon, aims to distill all of these elements into an ultra-thin chassis to go up against the likes of the Apple MacBook Pro and the Dell XPS 13.

This version doesn't represent any particularly major departures from the look and feel of previous X1 Carbon devices, and isn't sporting any particularly notable change over its predecessors - with the exception of moving to Intel's eighth-gen chips, of course.

As with previous iterations, the new ThinkPad X1 Carbon is built with a mix of carbon fibre, glass fibre, plastic and magnesium alloy. As well as giving it a pleasant soft-touch finish, this makes it impressively light, weighing only 1.13kg - so it's a 14in laptop, with room for full-size USB and HDMI ports, but only weighs as much as a super-slim 13in ultrabook. Not that it's unduly fat, either: at 16mm, it's rather svelte.

Speaking of ports, the ThinkPad X1 Carbon is a cut above most ultraportables, fitting in two USB3 ports, both HDMI and USB Type-C Thunderbolt 3 sockets for video output, and a second USB-Type C port which can be used for either data or charging. Also, hidden on the rear edge is a tiny compartment containing both a microSD slot and a micro SIM slot, which goes hand-in-hand with the integrated LTE-A receiver. It's an easily-missed inclusion but shows the ThinkPad X1 Carbon's serious business credentials. 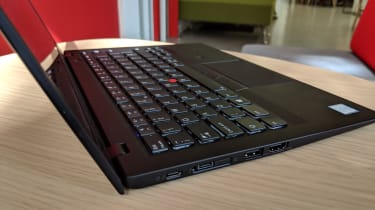 There's no Ethernet jack, but Lenovo does include an Ethernet extension adaptor for another, slimmer port next to the Thunderbolt 3 connector. However, the two are so close together than the adaptor prevents any Type-C cable from being able to plug in - an unfortunate oversight, especially if you've connected to a monitor and want to use a wired network connection at the same time.

Another issue is heat. The base can get noticeably warm on light use and uncomfortably hot under heavy loads; we could feel it every time we touched the Backspace and Enter keys.

On a more positive note, Lenovo has updated the ThinkPad X1 Carbon's webcam with its "ThinkShutter", a fancy term for a small piece of plastic which can slide over the camera sensor, obscuring it. This is a nice little win for the privacy-conscious, and a fast-acting fingerprint reader on the right palm rest also offers a welcome layer of additional security.

When it comes to keyboards, opinions can differ as to whether it's better to have as much travel depth as possible, or to follow Apple's tactic and have extremely low-profile keyswitches with a minimal travel distance. While we're fans of both approaches, Lenovo subscribes to the former.

The ThinkPad range is typified by keyboards that have heaps of travel depth and firm, satisfying feedback, and the X1 Carbon's spacious curved keys are no different. ThinkPad keyboards rarely disappoint, and this one makes for a quiet and comfy typing experience. The ThinkPad family is, in our opinion, the gold standard for Windows laptop keyboards. 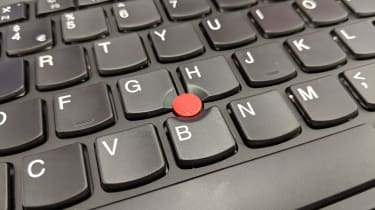 There's an oddity here, though: after every full restart, the trackpad would suffer bouts of sluggishness, with occasional delays between swiping and the cursor moving, and taps sometimes not registering as clicks. Even weirder is the fix: closing and opening the lid, sending the laptop to sleep just long enough to snap the pad out of its funk. It's not ruinous, but it is annoying, especially for a laptop that's otherwise so well-made.

In addition to the trackpad, Lenovo's signature red pointing stick - officially known as the 'TrackPoint' - makes another appearance. We didn't use this much ourselves - it takes surprisingly forceful pokes for the cursor to move faster than a crawl - but it's low-profile and only slightly encroaches on the G, H and B keys, so it's easy to ignore if you'd prefer to stick to the trackpad. It's also a pleasingly old-school feature that will doubtless appeal to some of the ThinkPad's more die-hard traditionalist fans who have grown accustomed to using it.

Speaking of throwbacks, the ThinkPad X1 Carbon is one of the few laptops that still features separate physical mouse buttons, rather than relying on buttons built into the trackpad. The trackpad still features integrated buttons, of course, but if you're a bit more old-school, you can use the two physical ones, located just above the trackpad.

You can opt to equip the 14in ThinkPad X1 Carbon with either Full HD and Quad HD resolutions, as well as touch capability, but we were more than happy with our non-touch IPS panel running at a beautifully crisp 2,560 x 1,440.

It's a massive improvement on the 2017 version, which only reached a peak brightness of 312cd/m2 and covered 82% of the sRGB colour gamut. This time, brightness peaks at a searing 526.9cd/m2, and sRGB coverage has shot up to a near-perfect 99%. Wide viewing angles and a high contrast ratio of 1,525:1 also contribute to the general loveliness of this screen.

The only catch is accuracy: we measured an average delta E of 4.04, which is some way off the ideal 1. This won't bother most users but could prove troublesome if you're looking for a laptop to edit photos or video with, as colours may appear differently on this display as they would on a more colour-accurate one. 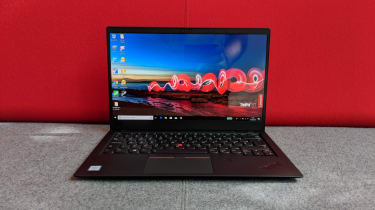 Interestingly, our review unit had the same key internals as the Dell XPS 13: a quad-core Intel Core i7-8550U, 16GB of RAM (which is soldered on, preventing upgrades) and a 512GB PCIe SSD. Dell's laptop seems to do a better job of avoiding throttling, though - it scored 96 overall in our 4K application benchmarks, whereas Lenovo's scored 80.

With individual scores of 106 in the image test, 85 in the video test and 67 in the multitasking test, the ThinkPad X1 Carbon is actually much closer on performance to the HP EliteBook 745 G5, which is hundreds of pounds cheaper. It's not that this is slow by ultraportable standards, but we know the hardware is capable of better. As such, it's more suited to massive spreadsheets and tab-stuffed browsers than it is for things like lengthy encoding tasks.

Battery life is also somewhat middling. The ThinkPad lasted 7hrs 3mins in our video playback tests, which isn't as impressive as the 10hrs 7mins achieved by the XPS 13 or the LG Gram's 11hrs 23mins. On the other hand, it's better than the Acer Swift 5's 5hrs 55mins score and the HP EliteBook 840 G5's 6hrs 30mins, and you'll probably be able to squeeze a full day's work out of a single charge, provided you don't push things too hard.

This latest ThinkPad X1 Carbon is a much more qualified success than its more recent predecessors; it's hot, it's expensive, and it's not as powerful as the XPS 13 despite having the same processor and RAM.

And yet, it's remarkably endearing, both as a serious business device and as an everyday ultraportable. Colour accuracy concerns are easily forgotten when using the star-bright, high-res display for less technical pursuits, and while if there are more powerful alternatives, the XPS 13 is pretty much the only one which isn't a bulkier 15.6in model and/or a gaming laptop. Even the trackpad issue can be worked around in a couple of seconds.

Whether you should spend 1,800 on it largely depends on how important you'd find the more enterprise-focused aspects like the LTE connectivity and Windows 10 Pro operating system. If you can go without, the XPS 13 is superior; otherwise, feel free to splash out.