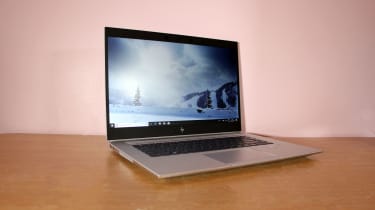 The HP EliteBook 1050 G1 is a laptop that promises everything. On the outside, HP says that it's got the design to wow the boardroom and the build quality to survive life on the road. On the inside, it's supposed to have the power and the features to blitz through business tasks.

It's cheaper than its rivals, though, at 1,250 exc VAT - and machines like the Dell XPS 15 and Apple MacBook Pro 15 certainly offer better quality in some departments. Can this more affordable notebook gain ground against strong competition?

The EliteBook looks excellent, and there's enough about its design to make it stand out from its main rivals - the familiar MacBook Pro and the dated carbon-fibre of the Dell XPS.

The base has sharp, bevelled edges and brushed metal sides, and there are more eye-catching angles where the base meets the screen. The lid has HP's smart new logo, the base has milled vents, and the Elitebook logo sits to the bottom-left of the keyboard. The speaker grille is smart and stretches across the entire width of the machine.

It looks the part, but this 15.6in machine is a little chunkier than the competition. It weighs 2.06kg, and it's 22mm thick once its rubber feet are considered. The MacBook Pro 15 weighs 1.8kg and is 16mm thick, while the Dell XPS 15 is a 17mm, 2kg machine. The HP's dimensions aren't ruinous, especially for a laptop that's not as expensive as the competition, but they're worth considering if you want to lug this laptop around from day-to-day. 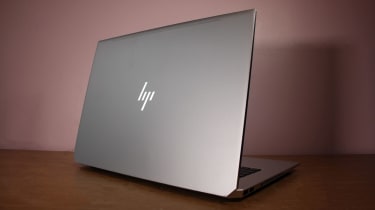 Build quality is another area where the cheaper HP can't quite match the Apple and Dell machines. There's a little give in the aluminium used to build the base, and pressing the back of the screen sees the desktop distort. The EliteBook's build quality isn't bad, but the competition is definitely better.

Around the edges you'll find pairs of Thunderbolt 3 and USB 3 ports alongside an SD card slot and an HDMI output. Apple's machines give you four Thunderbolt ports but no USB connectivity and no HDMI, while the Dell matches the HP's configuration. On the inside, you've got dual-band 802.11ac wireless networking, but no wired networking.

Impressively, HP's machine includes several neat business features. A plastic cover can block the webcam, and there's a fingerprint reader beneath the keyboard. The base panel can also be removed, which makes this machine easier to service than Apple's systems.

You get Sure Start Gen 4, which adds a layer of protection to the BIOS, and this machine is also compatible with the Thunderbolt Dock G2, which serves up wired networking, more USB ports and additional display outputs.

The HP also has an impressive screen privacy option. Pressing F2 activates an extra layer that makes the screen almost impossible to see for anyone sat on either side of the machine - while keeping the system usable for its owner. With this option activated the screen is a little dimmer, but it works very well to block viewing from the side - and that's a worthwhile trade-off if you're handling sensitive work or using this machine in public.

The HP's keyboard is a more conventional offering than the low-travel switches in latest Dell and Apple machines - but that's not necessarily a bad thing.

The HP's keys are consistent and fast, with no sign of slowdown or softness when they're pushed into the rock-solid base. Some people may prefer a softer, more cushioned feel, but we like the consistent and clinical typing hardware on this machine. 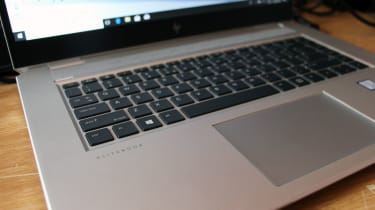 The layout isn't perfect, though. Just like the Dell and Apple machines, there's no numberpad - and we're not enamoured with the odd, squashed cursor keys or the single-height Enter button. The trackpad is only middling, too. The pad itself is fine, with a smooth and accurate surface, but the buttons are spongy and require too much pressure to register a click.

The 1080p, 15.6in screen is an IPS panel with an anti-glare coating - but that coating, and the extra privacy layer, ensures that the panel is blotchier than screens without those features.

It's something that users will learn to live with, although the blurring layer and the lack of resolution make rivals look more enticing: the MacBook Pro has a 2,880 x 1,800 screen scaled to 1080p, while pricier Dell models have 4K screens.

The HP's quality levels are a little inconsistent, too. The colour temperature of 6,506K is superb, but the average Delta E of 2.27 is a little bit lower than what we'd like to see from a work display. The brightness level of 620cd/m2 is huge, which bodes well for office lights and the great outdoors, but the black level of 0.55cd/m2 is high. That black level means that darker areas look a bit too washed-out.

That black level undermines the brightness and contributes to a contrast ratio of 1,127:1. That's not bad, but it means that images won't be as punchy or as vibrant as rival screens.

The HP's screen has superb uniformity, but its gamut coverage levels are underwhelming. It handled a reasonable 92% of the sRGB gamut, but fell below 70% with the Adobe and DCI P3 gamuts - and those two are important for photography work, graphic design and broadcasting. 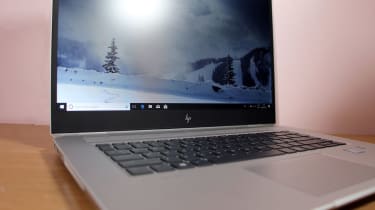 The MacBook Pro isn't quite as bright as the HP, but it's still bright enough, and with better contrast and better gamut coverage levels. The Dell is also better than the HP in those key tests. This is clearly an area where spending a little more gets you a much better screen.

We've reviewing one of the beefiest and more expensive models from the EliteBook 1050 G1 range, which uses an Intel Core i7-8850H CPU. It's one of Intel's latest processors, which means you benefit from the improvements of Coffee Lake, and the specification is enticing: there are six Hyper-Threaded cores, a 2.2GHz stock speed and a Turbo peak of 4.1GHz.

A word of warning - while configurations featuring this CPU are available through HP's channel partners, if you're buying through the web store, you'll only be able to go up to the i7-8750H.

This high-end model comes with 32GB of memory and a 512GB Toshiba XG5 SSD. Other, cheaper models have smaller SSDs, lesser memory allocations and more conservative processors - but some of those do have vPro support, which isn't included in the model we've reviewed.

Apple's MacBook Pro 15 options also include six-core, eighth-generation processors, and they have similar storage and memory configurations. They're both a little more expensive than the HP, with the cheapest MacBook costing 1,957 exc VAT.

Dell's XPS 15 machines have broader configuration options, and you only have to pay 1,369 exc VAT to get a machine with a 1080p screen and the same CPU as the HP EliteBook - but you do miss out on most of the business features.

The HP is not slow, but it lagged a little behind in some benchmarks. Its single-threaded Geekbench score of 5,077 crept ahead of the Dell but was 500 points behind the MacBook, and its multi-threaded result of 19,506 was around 2,000 and 4,000 points slower than the Dell and Apple machines respectively. There was little to choose in our own benchmarks, with the HP returning an overall score of 172 - just one point behind the Apple machine. 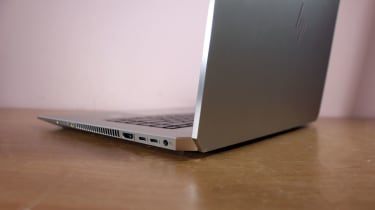 The Kingston SSD was inconsistent, with great read pace of 3,144MB/sec but a mediocre write result of 945MB/sec. Still, the drive never slowed down the HP, and there's a lot to like about the EliteBook's performance despite rivals being a tad faster. It'll still handle the vast majority of work applications, especially with 32GB of memory.

Graphical power comes from an Nvidia GeForce GTX 1050. It's a fine mid-range chipset, but HP has opted for the Max-Q version. This means that you still get 640 stream processors and 4GB of memory, but the core has been cut down from 1,354MHz to 1,000MHz in order to reduce heat output and improve battery life.

We ran DiRT Showdown at 1080p and Ultra settings with a 70fps average framerate. That doesn't just bode well for after-hours gaming - it means that this laptop will handle video and photo work with ease. Unless you're trying to use demanding, enterprise-level tools, you won't have issues getting your apps working smoothly on this machine.

The EliteBook is a great thermal performer, too. Its peak CPU and GPU temperatures of 77C and 64C are fine, and the exterior was always cool. The fan noise is noticeable, but a tad quieter than the Dell.

The HP's 96Wh battery lasted for an impressive nine hours in our benchmark. That's a little better than both of its rivals, and enough to see you through the working day if you're careful with the screen brightness and with the applications you run. If you do want to stress the components with more demanding software, though, do expect to plug in before you head home.

The EliteBook, initially, looks look a machine that's trying to jump on the XPS and MacBook Pro bandwagon while cutting back the cost. However, while it doesn't quite achieve that, it's actually more impressive than its pricier rivals in several other departments. 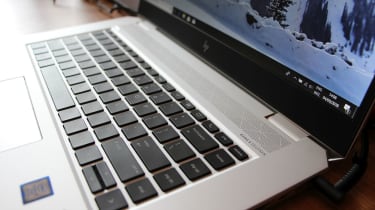 It has more proper business features than either of its competitors, and it offers similar levels of performance while outpacing both machines in battery tests -- as long as you opt for the larger of the two power packs that HP sells with this system. The keyboard and trackpad are both good, and you get full-size USB ports.

The design is attractive, even if it can't quite match Apple, and the screen is fine too -- despite the fact that, for pure quality, it's beaten by both rivals. That's where the extra budget on those machines is really obvious.

The Dell and Apple machines are certainly better options if you need something that's lighter and more suited to work where screen and colour accuracy are paramount - and for those people it'll be worth paying the extra. But if you need something more affordable for more conventional tasks - and where privacy is important, too - the EliteBook is a great alternative.

The HP EliteBook 1050 G1 doesn’t quite have the panache or the screen quality of some of its rivals, but it does have more business features, better battery life and solid, consistent performance. It’s cheaper than its rivals, too, and it’s ideal for work where colour accuracy isn’t paramount – or where privacy is key.